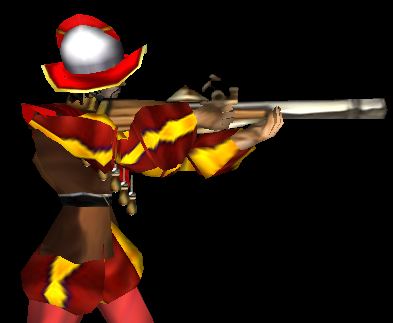 This bundle is marked as approved. It works and satisfies the submission rules.
View usage Statistics Legacy download
Reactions: Ićpomp, Barsbold, deepstrasz and 3 others
Spanish renaissance arquebusier, known in the spanish language as: arcabucero. Initially planned for historical or warhammer-inspired maps, where it may be fielded into the ranks of the Estalian army.
You can use it and modify it as much as you want. Credit to Cuore as the original creator is much appreciated.

Special thanks to HerrDave, and to MechanicalMan for inspiration and guidance.
Credits to Direfury for the lower part of the jacket, taken from one of his elven paladins.

Models 17
As an addition to the model, I attach here an equivalent version of it without team-color. It still needs to use the same portrait of the published model, therefore it's recommended to rename the portrait file ending part from "1.1" to "1.0" if you plan to use it alongside this second variation.

Icons 4 Maps 1 User Interface 1
Haha really cool! I saw Cuore's most recent progress (struggles) with it and I'm glad it's finally out of the oven.

Models 3 Skins 1
Its really cool but he look like a chicken you can try fixing your 'walk' animation on it and fix the neck of it pretty high.

Atasha JG said:
Its really cool but he look like a chicken you can try fixing your 'walk' animation on it and fix the neck of it pretty high.

yep it totally like a chicken and the foot are small.but i like it
Last edited: Dec 29, 2017

Models 17
It's my first animation and this kind of comments is exactly what I was looking for to correct my mistakes. Thank you guys!

Edit: updated both versions of the model with another walk cycle. Thank you @Atasha JG !
I didn't change the size of the feet because I fee like they are ok how they are: small but not exceedingly so.
Last edited: Dec 29, 2017

Models 3 Skins 1
No problem and don't forget to change the neck looks tall.
and stand-2 animation need more work too the pants getting upside.
I like your model as well useful for any maps with scarlet crusader organization/clan.
Last edited: Jan 1, 2018

Overall really good model, but he looks a bit too much realistic, if I may add. Warcraft models are all a bit bulkier and cartoonish.

MogulKahn said:
Overall really good model, but he looks a bit too much realistic, if I may add. Warcraft models are all a bit bulkier and cartoonish.
Click to expand...

Normally I'm with you, but he put got help from HerrDave & put "Warhammer" in the tags... Something tells me it's not for Warcraft (stylistically at least). : )

Models 17
Yeah MogulKhan and Kyrbi0 you're both correct. I made this from scratch using pictures of Spanish warriors of the 16th century as reference. I really didn't take care of getting the proportions right for warcraft.
HerrDave gave me some tips and counsels, including a very nice scheme to adapt this model's proportions to the usual warcraft unit which has been and will be of extereme usefulness.
This, and the quite humungous clipping of the arms are making me lean towards a need to remake this concept from the ground up.
Until then, I hope that this can still be of use to some mapmaker interested in renaissance european themes.

Models 17
Thanks for pointing that out. If I insert vertex coloring, sometimes magos modifies alpha too upon saving. Should be okay now. Version numbers removed from the filenames.

Models 191 Icons 124 Packs 6 Tutorials 2
Please remove the decrepit camera from the portrait file. This might cause some minor or mayor issues.

Models 17
Thanks for the heads-up.
Change applied. Asking for re-evaluation for approval when possible.