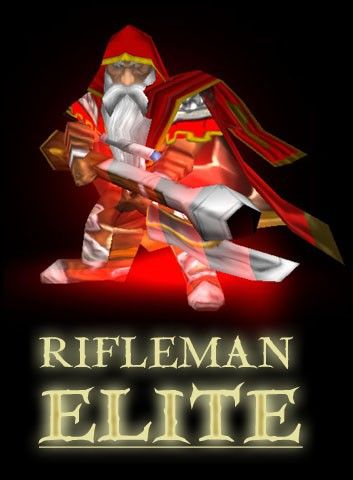 
Think of them as dwarven special forces - extremely skilled warriors trained to battle in both ranged and close combat, on any terrain and in any weather conditions. They are veterans of many wars and battles, most of them played key roles in defence of Dun Morgoth during the Second War. Elite Riflemen squads count up to 5 members, every one of them has a special squad insignia (the one presented here is a Hammer Squad member). They use modified Blunder Buss rifles with sniper scopes and bayonets, a deadly weapon for all occasions, and gnomish fragmentation grenades.

If you want the rifleman to attack with rifle animation only turn on only 1st attck.
If you want him to attack melee only - turn only 2nd attack.
Unfortunately - it is NOT possible for this unit to ranged attack units that are far
away and then melee attack them when they get close - because both (1st and 2nd) attacks use the same minimum range, so you must choose the attack you want, folks (well, you can also set the ranged attack to harm only air units and groud attack to damage land ones - but it's not to funny).

If you have questions about this model - mail me: [email protected]

Reviews
20:44, 1st Mar 2009 Dan van Ohllus: I can't believe this model hasn't a model moderate review. Director's cut for it's awesome usage of animations, and the quality of the model itself is great
Read full review...

Because, if there is no name-changing, the alternative-form just enable 'combat - attack 2' don't show attack info ingame
When you done, please tell me

Maps 1 Spells 2
I really wanna use it... is there a smaller size version? xD

The size of this model is a pain. Really, really, a pain.
I was supposed to download it until I saw the file size.

This is awesome, but how do i make this a replacement to the original riflemen?

Packs 1 Skins 4
anyone tells me why the file is so big. Isn't it too heavy to import into your map? 862.4KB @[email protected]

the only thing is that the filesize is incredible too.

Could you make a version of this model that doesn't have the hero glow?

Hey guys, if you wanna make him attack close range and distance, you simply need to give it a skill that allows him to attack close range. If you use a searing arrow or a cold arrow, you set the range to 100, and use the animation of attack two, you have 0 problems It works. And as for the model! I have loved this model in all of the times ive seen it 5/5! ;D

Maps 6
Isn't this one of the hidden models in world editor ?
I definately used it some time ago, in current update of TFT it is no longer available, but model was created by Blizzard..

Herohatcher said:
Isn't this one of the hidden models in world editor ?
I definately used it some time ago, in current update of TFT it is no longer available, but model was created by Blizzard..
Click to expand...

No it is not. Nuff said

Maps 2 Spells 2 Tutorials 1
There are only 2 problems with this model, IMO. The wrap on the inside of the rifle looks like crap and is very-easily seeable.

The death animation plays a liiiiittle bit too slow.

Icons 7 Maps 1
This model is one of the bests for using it on my map. Thanks bro, I will give credits on the map ofcourse.

Icons 1
What are the paths? It doesn't work if I leave the paths at <name>.mdx

what to text to input to perform the reload animation?

Maps 1
This model is perfect for the map im making, thank you very much!

This one's perfect!!!
Thanks a lot!

Models 2 Maps 1 Spells 1
Making my pilgrimage to a great model.
You must log in or register to reply here.