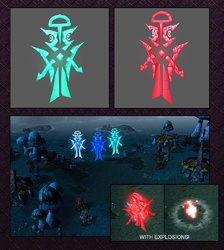 Criticism is appreciated, but I'm afraid this model is unlikely to receive updates unless it's something minor. Anything that will force me to bring it back into 3D Studio Max (e.g. touching up the animation) is probably not going to get down. Testing it is too much of a hassle and there's other projects I'd rather spend that time working on. Criticism that will benefit future models/textures/animation is more than welcome though.

Please give credit to me if you chose to use this model, do not resubmit it to other sites, and do not edit it without permission. If you ask I will most likely give you permission, unless you intend to use this model for nefarious purposes.

Moderator
07:03, 6th Feb 2014 MiniMage: While I have no idea what this actually is supposed to be, it looks like some kind of guardian of sorts? Either way, I suppose this could be useful. Approved.
Read full review...
Reputation Statistics
Page 1 of 3
Show Ignored Content
Page 1 of 3