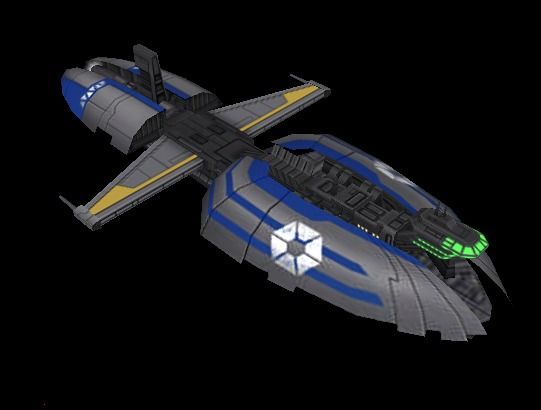 This bundle is marked as approved. It works and satisfies the submission rules.
View usage Statistics
Next up in my Star Wars-series is a CIS Munificent-class Star Frigate. It is the workhorse of the separatist fleet, and although not very strong on it's own, it is very capable when in greater numbers.

These are some of the object editor values i recommend:

Compared to the other models, this one is slightly oversized, so i recommend scaling it down to around 0.90 for accuracy. Includes attachment points, death sounds, teamcolor, and more kickass glow-in-the-dark features, just like the other ships. Enjoy.

You Should Make a Pack

All these models make me want to create a Star Wars map just so I can use it!
I find this model specially higher quality after taking it a look in model viewer.
5/5

Maps 3 Templates 1
This is so damn realistic and modern! I wonder how the hell such models are created. Awesome job man!

btw do you have a 512 version of the texture too?

Models 147 Icons 1 Packs 4 Skins 2 Maps 1 Spells 3 Tutorials 1
Yes! I am attaching it below. I also have a version with a brown hull, as it is mostly depicted in SW canon (i gave this one a grey hull to better fit in with the rest, and because it made it look more generic).

Thanks everyone who commented! Really motivating to get this kind of response. Next up is the Droid Gunship (almost finished now!), and after that, either the Consular-class Cruiser or the Recusant-class Light Destroyer. I also have an AT-AP which i am almost done wrapping.

Awesome! Great work, keep it up and thanks for sharing!

Icons 3 Skins 1 Tools 1 Maps 7 Spells 32 JASS 4 Tutorials 3
I wonder why are you submitting spacecraft models whereas you are working on a warfare map? : p

Models 147 Icons 1 Packs 4 Skins 2 Maps 1 Spells 3 Tutorials 1
Well, i don't have to focus everything i do on that project... one can make models for the sake of others too! I had plans of maybe making a kind of star wars map similar to Solar Conquest, but we'll see if that ever gets done.

This is awesome, you could provide an entire space fleet with you're skill.

I love the style and hope you make more of their ships.

Edit: You asked me to tell you what you could do to make your model better. I usually give as much advice as possible, but I hadn't this time because there really wasn't anything wrong with the model. But it takes more than just not having flaws to get a 5/5 from me. Since you asked, I'll take the time to dive into it and find ways for you to improve it. I don't expect you to make every change I suggest, but you should consider at least one.

To start, you could change the base of the ship's texture (the dark middle center of the ship). Since there's nothing specific about the details of the lines on this part of the ship, and its details are primarily in the unique shape of the mesh, you could use pretty much any in-game metallic texture without losing the feel, allowing you to cut this piece out of the texture. In the process, not only would you make it look better with an in-game texture that doesn't have to be compressed, but you'd also decrease the file size by about 30KB as you used the majority of your texture for this part of the ship.

You could even go so far as to wrap various parts of the TinkerTexture to the entire ship, which would look quite similar, and actually better, but you'd lose the unique teamcolor design, so you'd probably be better off simply taking the space you saved re-wrapping the other part of the ship and using it to increase the quality and level of detail in the rest of the texture to make the outside of the ship look better.

It would add 5-15 KB, but if you feel it's worth it, you could drastically improve the death animation by adding the mesh necessary to break the ship into pieces when it explodes.

The same mesh split could also be used to create a birth animation.

A subtle "muzzle flash" at the chin of the ship when it fires would make the attack animation more noticeable; you can barely tell if it's attacking or not without a laser projectile coming from it, which works fine except when someone wants to use more subtle projectiles (You can't really expect people to use one of the few great looking spaceship models on hive for only its intended purpose) such as bullets of some sort (A.K.A. Quillboar needles).
Last edited: Apr 3, 2015

InfernalTater said:
This is very cool! 4/5.

I love the style and hope you make more of their ships.
Click to expand...

Fingolfin said:
He gives 4/5 to every model larger than 75kb. It's just the way he is.
Click to expand...

It has nothing to do with the file size. The model is 4/5 quality which is very good. If I gave every model a 5/5 just because I liked it, like everyone else, it would mean nothing. I get 5/5 ratings from many users on my models and yet I would rate not a single of my own a 5/5.

I reserve a perfect score for remarkable resources. If you don't like it, tough shit, earn it. I like all of your models a lot, but I'm not going to give a 5/5 to everything that I see.

Also, it's not cool to complain about a 4/5 rating on your own resource. There's only one rating higher than a 4/5 that the community can give, so that's basically the same as demanding a perfect score from everyone.
Last edited: Apr 1, 2015

Tutorials 1
I've always liked the Separatists ships, and this is no exception.
You must log in or register to reply here.