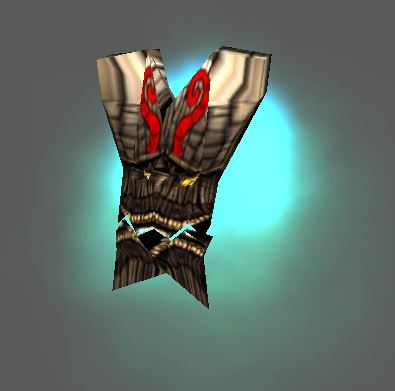 This bundle is marked as useful / simple. Simplicity is bliss, low effort and/or may contain minor bugs.
View usage Statistics Legacy download
Reactions: deepstrasz, Arowanna, Lord Alyx and 3 others
This is the textbook example of "why we shouldn't have to publicly upload our custom models for Modeling Contests". I'm sorry, everyone, that you had to be a witness to this.


~~~
PERMISSION:
~~~
I give Full Permission to Use, Modify, and Reupload Modifications to any who wish it. Please simply give Credits wherever this is applicable, and do not simply reupload as-is to other websites (keep modified re-uploads to the Hive).


~~~
DESCRIPTION:
~~~
This guy is a 'familiar' or little companion to the Shadow Hunter; a powerful floating 'mojo mask' made of darkened bark-plates & vile magicks. Animated by ancient voodoo, Troll mystics can enchant special carved totems of wood & imbue them with a dark spirit in order to gain a powerful companion. Able to cast a variety of spells from carvings in it's own living wood, the Mojo Mask strikes fear in the hearts of the Troll's enemies. Get one now while supplies last!


~~~
BACKGROUND:
~~~
Uploaded for HappyCockroach's great Mini-Modeling Contest #5! This model works best as a flying unit with fly-height of ~50-80. Can have either ranged (magic) or melee (biting/smacking?). I fully realize(d) that this is a horrible, terrible, bare-bones 1st-model-ever, achieved in a handful of hours under deadline. Honestly, while I plan on improving it, you can all just shuffle over to Wc3C.net & get Anemic_Royalty's vastly superior version, so there's that. Still, it's kinda neat to contribute in this way after all these years. Constructive criticism is greatly appreciated! 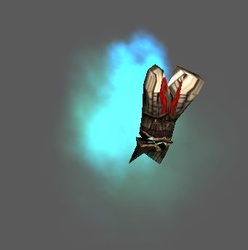 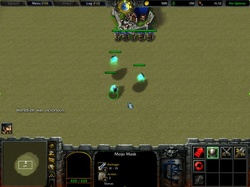 HappyCockroach
The idea is interesting, of a floating mask. There are some execution flaws though: I suppose it isn't a hero, but an unit. (It even as no hero glow) It has no decay animation though, only a dissipate. The wrap quality is below acceptable now. You...
Read full review...

Although, this is just me, but I would've tried to set it up with some sort of tendrils, like the Bone Spirit from Diablo 2.

Maps 7 Templates 4
Hands up, if you remember crash bandicoot.

Lord_Marrowgrath said:
Hands up, if you remember crash bandicoot.
Click to expand...

I remember *holds his hand up*

Models 119
Kyrbi0 and modeling? Wow.
For me this is just weird. The wrap could be much better, but it's nice to see another entry for the contest.

Misha said:
Kyrbi0 doing a model? what is this voodoo magic? xD
Click to expand...

Yeah... It's pretty weird for me, too. I've literally never posted a Resource of any kind, so this 'Bundle' stuff is new to me in a whole different way.

Honestly, I've always said I'm not an artist, and it's true... Mostly. I'm really much too formulaic & lacking-in-creativity for this kind of stuff, but I've been tinkering with models for years now, off an on, and I've compiled several different models... But all of them (this one included, lol) were really just super-simple edits of meshes & minor rewraps. Nothing meaningful/finished. So I've never uploaded.


Direfury said:
This is just silly. I like it.

Although, this is just me, but I would've tried to set it up with some sort of tendrils, like the Bone Spirit from Diablo 2.
Click to expand...

Wow, I'm flattered. It is indeed silly, though. I'd love some pointers.

"Tendrils"? Weird idea... I don't know about the 'halo' of tentacles as in Diablo 2, but I suppose I could've made one big tendril hanging below the mask by... perhaps messing around with the Shadow Hunter's beard? I wonder if it's possible...


Lord_Marrowgrath said:
Hands up, if you remember crash bandicoot.
Click to expand...

Heck yeah. I was indeed thinking of that, a bit... Perhaps it would be good to go more in that direction (feathers would definitely make him look more unique/cooler/better presence). Thanks.

Stefan.K said:
For me this is just weird. The wrap could be much better, but it's nice to see another entry for the contest.
Click to expand...

Yeah, the wrap is, second only to the mesh, my most major concern. It's horrible, and I am well aware of it. I literally just took the whole thing in MdlVis, reset the vertices, resized it to fit a certain segment of the AncientOfWar.blp, and then SPLAT. Threw it on there, and didn't move it (except for a few edits to the edge vertices that were off the edge of the texture, & the TC). The 'rimmed' teeth was completely by accident.
I tried using VoodooLounge.blp as well, but this didn't come out as well on the first try & it was almost 5AM, so I called it quits and said "hey, it's dark wood!". Lol. Any suggestions for editing UVWraps (in MdlVis or otherwise)? Or texture suggestions?

See my Wishlist (edited into the bundle post, but see below):

Mike said:
Nice concept. You can make global animation and make movement for lower jaw (up and down) in it. Edit. I made it, take a look, maybe you will accept this variation (only dont update new version right now. I not sure that we are allowed to update our entries now).
https://www.hiveworkshop.com/pastebin/9b304a48f5e707813356b69ea428d7b910476/
Click to expand...

Hey, thanks man; already it looks loads better. I will probably reverse-engineer this so I can make it on my own (rather than just simply using yours), but I greatly appreciate it. : )

Looking at it, I was wondering how you could make the jaw move without adding a bone... And then I found the new bone, lol. Neat.

I am kinda busy right now, but I definitely will be coming back to this, so don't forget me. ; )

Dunno why you say such a thing. It isn't my contest, it is a Hive Contest. I just helped by hosting it. (The contest structure, the resources, templates, and more importantly, the tradition, wasn't put up by a single person, and belongs to the community more than anything)

And if it was great is because we had many contestants, and many great entries. (And some.. on the way to being great xD)

(This isnt a moderation comment. We'll moderate as soon as the queue hits its submission date.)

Models 34 Icons 40 Packs 1 Tutorials 1
The idea is interesting, of a floating mask. There are some execution flaws though:
For now it's Substandard. If you work on it further, you may contact staff for a re-moderation.

HappyCockroach said:
The idea is interesting, of a floating mask. There are some execution flaws though:
For now it's Substandard. If you work on it further, you may contact staff for a re-moderation.
Click to expand...

Sure thing! Thanks again.
You must log in or register to reply here.