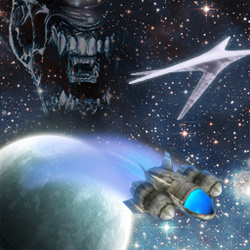 Metastasis
In a research sector of the United Security Initiative known only as 198X2, a group of scientists and station personnel are assaulted by an unknown threat. As their colleagues die one by one, they must fight to survive and figure out who is doing this to them, and how to stop it.

The Game
Metastasis is best described as a survival game. At the start, one or several players will be secretly selected as your opponents. You will be placed within a space station in the sector 198X2 and must figure out who is the enemy, and kill him before he kills you and your fellow humans.

Depending on the number of players in the game, there will be one or several enemies.
1-4 players: A lone enemy, who will either be a former researcher mutating rapidly into a cunning adversary, or an alien organism killing off station workers for unknown reasons.
5-9 players: Both the mutant and the alien work to kill your team as well as each other. Only one side can stand victorious.
10-12 players: The mutant and the alien are once again your adversaries, but rumors abound of a cold, metallic killer waiting to rise and annihilate every living thing in the sector.

Humans
To aid you in your fight, you have a myriad of station resources and your own education to assist you.
Being a research group in a theoretically dangerous sector, stations are equipped with state of the art military supplies, including many types of combat suits of varying abilities. You have been trained to use these suits, albeit only against the organisms on the local planet. No doubt you can adapt them to perform other, more murderous tasks. There is also an assortment of defensive and offensive weaponry, from stationary turrets and force shield generators to grenades and mighty fusion bombs.
You also carry your life experience and career with you. There are nine possible careers assigned to you at the beginning of the game, from researchers with various doctorates to a visiting captain of the battlecruiser Swagger to the lowly local janitor. Each career provides a unique benefit and alters your initial equipment and monetary income.

Enemies
The mutant and alien both have strong physical capabilities. Each is capable of overpowering an unequipped human easily. However, they are alone, and hate each other as much as they hate humans. The mutant and the alien both sport an ever changing genetic code- within the span of mere hours they can change their physical and mental makeup drastically. As the game goes on, each will slowly evolve into more powerful forms. Eliminating them early will prevent them from overpowering you with massive strength, dominant mental abilities, or swarms of minion-like organisms.

Infection
The mutant has the ability to evolve a infectious called a prion. By weakening the human body, the prion eventually forces a genetic change in the host, altering it to serve the original mutant and take its form.
The alien also has a similar parasitic microorganism it launches into humans, slowly weakening them and eventually eating them away. By doing so, the parasite grows into a facsimile of the original alien, while retaining traces of the infectee's personality, though twisted into serving the alien leader.

Stations
Featured in the sector are four space stations and a planet situated around a single star. Each station has unique capabilities and can be visited at any time by using one of several types of spaceships or escape pods. The largest station is the U.S.I. Queen Niffy, which boasts a large infrastructure and fleet of spaceships, as well as many curious research labs dedicated to the sector. Other stations include the Arbitress, an advanced sensors station, the Kyo Station, which is a container for the experimental Kyo Cannon spatial artillery platform, an old unused station now scheduled for demolition. These are all situated around the orbit of the local planet Minertha, a terraformed but as yet uncolonized planet. A small military station was set up some time ago, but no one currently occupies it.
A battlecruiser from the U.S.I. fleet is also currently visiting the sector.

UPDATE (1.8.2):
-See changelog at http://thegoodsirs.net
I don't even anymore