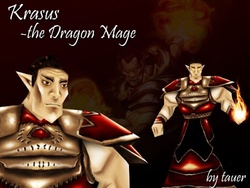 Wow, it's been some time since I've been modeling for WC3. Don't know if the community is even alive anymore, but here goes.

I chose to make a model of Krasus, the Dragon Mage, consort of Alexstrasza, Queen of the Red Dragonflight.

It didn't turn out quite as close to the concept as I wanted, I ended up using some artistic freedom. But I think he turned out quite well.

Hopefully someone still makes stuff for this game, and has some use for him.

I might go over him again at some point, mainly to touch up on the skin again and to make a morph animation.

Free to use for anything as long as you give credits of course.

NOTE: He might be a little small compared to other heroes. Not that much though. You might wanna set his scale to about 1.10 in the WE. It depends on your taste though.

UPDATE 2: Made a few minor changes to the Walk cycle. Also changed the camera view on the portrait.