Hoist of the Seven Conundrums v1.0 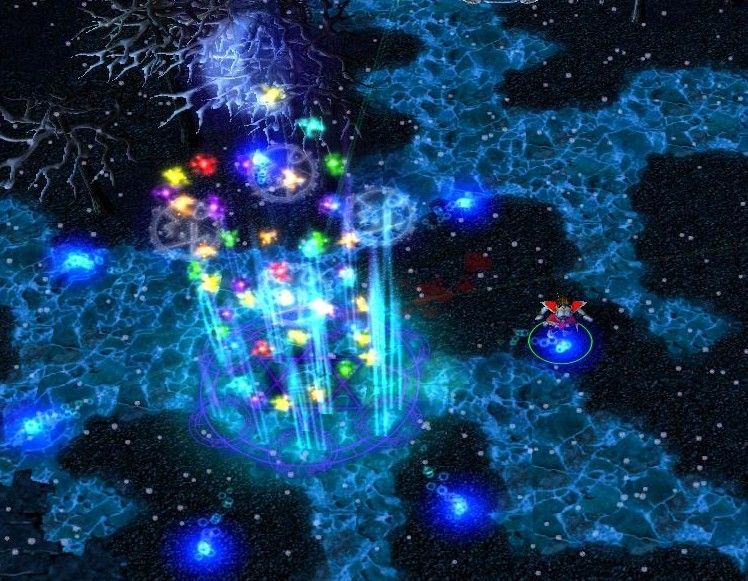 This bundle is marked as approved. It works and satisfies the submission rules.
View usage Statistics Legacy download
Reactions: deepstrasz, Oljin, JesusHipster and 5 others
Hoist of the Seven Conundrums
Calls forth the mysticals powers of the Seven Conundrums, the unsolved mysteries of the universe, to create a column of positive energy, that will convert any soul into a healing power.
Creates a column of pure magic; every unit killed by the caster will be slowly dragged towards the column and will be converted into souls, that will heal nearby allies for 20 health and 10 mana each.
Level 1 - Lasts 20 seconds.
Level 2 - Lasts 40 seconds.
Level 3 - Lasts 60 seconds.
This is a spell I just made; I really like it, but, since it's a bit complicated (many triggers and stuff), it's possible you found something weird, so, let me know.

If you use this spell, please give me credits for my work.

Hoist of the Seven Conundrums (Map)

Filename
Hoist of the Seven Conundrums (by Pharaoh_).w3x

Very cool and original spell. I didn't see any leaks.

Icons 4 Spells 7 User Interface 1 Tutorials 1
I know they are too many; if you think you can make it with less triggers, go ahead

Pharaoh_ said:
I know they are too many; if you think you can make it with less triggers, go ahead
Click to expand...

just put all periodic actions in the same trigger

Icons 4 Spells 7 User Interface 1 Tutorials 1
The mechanism you describe will not provide the same result. How could I possibly add the wisp loop trigger, that runs every 0.05 seconds into a 0.5 periodic event trigger? Each loop calculates and picks different stuff. If I combine some of them (that they probably have the same periodic event, e.g. 0.05 seconds), well, the pick on the wisps might end, while the other units, the dead ones that are dragged to the wisps' column should be still moving. I mean the trigger should stop for the wisps and keep itself on for the dead units, while I make a condition call to turn it off, once there are no units left in the wisps' group.
I really believe there are many triggers required, because of the spell's multiple sub-effects:
The casting trigger, the wisps' rotation, the one that counts the deaths to respectively add the dying unit in the trigger it should go, the drag of the dead units, their elevation and another trigger that works as a debug (the one with the timer) that kills the dragged units, in case the spell's duration is up, before they reach the column.

Icons 1 Spells 3
What Pharaoh says it's true, but I think you'd be able to merge two of them into one, like those two 0.05 second ones.

Icons 1 Spells 6 Tutorials 1
You can merge all periodic triggers, it is just a matter if you want to.

Icons 11 Spells 10
I could create this spell with only one trigger . But anyway, nice spell.

Skins 1 Tutorials 1
I tried this one. One of coolest spells I've ever seen. Looks just so damn awesome

Tools 1 Maps 13 Spells 1 StarCraft II Resources 1
Very nice, nothing else to say about the triggering, since the other people already mentioned everything +rep

Icons 82 Packs 2 Tools 1 Maps 6 Spells 11 JASS 1 Tutorials 1
Why is this in GUI?
Such complicated spells should be made in vJass, GUI isn't really a good choice when it comes to complicated stuff.

Icons 4 Spells 7 User Interface 1 Tutorials 1
I have never made a vJass spell. I know how to code them in general, but never tried the actual script. I am fan of complicated stuff and I know that using GUI makes the submission isntantly underestimated, but it's more convenient for me..

Models 1 Icons 228 Packs 1 Skins 2 Spells 7 Tutorials 2
OmFG! Coloorzzz! Dl Dl DL DL!
Edit: Spell is owesome! Eye candy is so nice ^^
The only wierd thing is... when unit body is floating to energy portal and it closes before unit reach it, units dies again...
Also special effect ImpaleTargetDust spawn every 0.05 and cause lags.
I know what this effect is heavy and user can change it, BUT you shuld make Spam period.
It is IF when you skip effect spawn:

This will descrease spell lag dramaticaly and also you will be able to descrease loop time so spell will have cleaner and faster look
Last edited: Mar 4, 2010

Wow , what an awesome spell !

Just found a bug, may not be that big but anyways: When cast after the cd is off I get an error message from your spell "allready invoked " or something. Is it supposed to only be used once? If so, please just add an infinite cd to it instead of tricking players.


+ Eyecandy is nice, but I think the dust effect doesn't quite play along with the rainbowish colours of the spell itself, + you could reduce the dust effects a bit perhaps.


Btw, since you set the flying units height not taking any Z of the terrain it's standing on it might get affected by trees, buildings but not least cliffs. But it's really not that important, just a nit pick ;P

You're a really good trigger'r and you should consider vJass, it will open enormous windows of opportunities. ^^
Nice work, 4/5!


Edit, just came up with a thing that imo would make it look wicked

If you make the swirl of whisps go crossing eachother like the dna stuff that would be awesome, but you're the creator

Icons 4 Spells 7 User Interface 1 Tutorials 1
Thank you all for your feedback; I will update it soon.

Maps 2 Spells 14 Tutorials 1
To me it seems that this spell is not MUI.

Increase the timer value that you save to the hashtable to 3 or 4 seconds so you make sure you have time to cast it with another unit during that time.

The first cast will leave some effects on the ground, and you can't cast it on that unit again.

I don't think you can use timers like that, you're using one timer for all casts, and when you cast the spell again while it's on, the timer will be reset, no unique timer for that cast is created.

The spell is nice and looks lovely, other that the fact that the wisps disappear too suddenly and the trigger that updates their flying height has too high repeating time making it look jerky. I hope you fix this issue.

Icons 4 Spells 7 User Interface 1 Tutorials 1
So, what can I do to fix the timer issue?
The trigger that updates their flying height has too high repeating time? Well, then I should decrease it, I just wouldn't want a trigger that just changes the flying height of a unit to be of such a low rate.

The trigger isn't too demanding, I think you can safely use 0.03 which is the highest value that looks smooth in my eyes.

Icons 4 Spells 7 User Interface 1 Tutorials 1
Will try that. Thank you for the input.

Icons 15
This spell is simply pure awesomeness !
The only thing that disturbed me was this big dust cloud which follows the soul before it enters on the magic pillar. It's just too heavy and ugly, and i don't understand why you added this useless SFX.

First of all, awesome spell, with great eye-candy! But, is it just for me, or does anyone else get the bug that when the spell ends, the colored wisps just stops rotating, and slowly rises up to 620 flying height, then stops, and just hang there for the rest of the game? It's not supposed to do that, is it? :/

wow - a really nice spell, for me its definitely 10/10 ....really shows that there are ways to do great spells with GUI too, although it seems to be really complicated - at least for me...

Maps 2
I just love watching this spell
But this spell is based on "channel" right? If I have two spells on a hero based on channel, it will activate both spells, is there any way to fix this, other than removing the ability?

aider said:
I just love watching this spell
But this spell is based on "channel" right? If I have two spells on a hero based on channel, it will activate both spells, is there any way to fix this, other than removing the ability?
Click to expand...

Maps 2 Spells 14 Tutorials 1
This great spell still isn't MUI unfortunately. You can't use the same timer for every unit for HS7. Use a timed dummy instead or index timers.

And this trigger:
It leaks two unit groups as far as I can tell. You could also save some of those things into variables, instead of loading them again from hashtable.

Icons 4 Spells 7 User Interface 1 Tutorials 1
Yeah, I know that Maker. See I did this before getting to know Jass, so if I remade it, I'd probably do it in Jass for better performance.
As for the group load, if I use destroy group, then by the time the trigger runs once more, it won't be able to refer back to that group. I'm almost certain that CreateGroup() leaks, not loading. )

Thank you for the input once again ^^

Maps 1
this spell is really original and amazing! truly unique!

+ very good job with all the animations
+ works fine, i see no leaks
- not easy to find the lines where the heal and mana happens, because there is no configuration trigger.
- i didn't find a easy way on how to scale the heal with levels... (maybe i have overseen the right variable, but at first sight i didn't see anything useful for that)


i would like it when also other heroes/units could trigger the event, and not only the caster himself.
is that possible somehow?

Reforged HD Models 7 Reforged HD Skins 3
lol it is a cool spell like Oljin says, where would i go to change the 'units killed by caster' to something like a unit owned by ally of player(or rather caster)
you lose track of where what things being saved to and loads and keys and all that fun stuff, its been like 10 years for me to, as a campaign using this for a support hero would need to know how to change that or rather where in all these triggers am i changing what to make it allied units and/or owned units.
You must log in or register to reply here.

Pirates of the Caribbean Frontpage