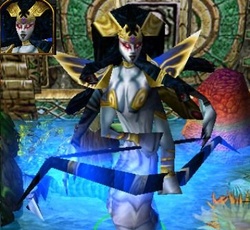 Epic Lady Vash'j skin, based greatly on the concepts from WoW.
Updapte: Made lips darker, fixed her crown and the shading on her eyes, added a lil smile also. Moderator
17:57, 17th Jul 2014 Misha: I like it, however, the eyes look pretty blurry and aren't very defined like it's in the picture, and they also feel too big for the face. Also, the snake-hair coils could use some highlights like they have on the original...
Read full review...
Reputation Statistics
Show Ignored Content