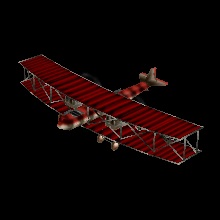 This bundle is marked as approved. It works and satisfies the submission rules.
View usage Statistics
Reactions: GhostOfPast, deepstrasz and Mythic
The Gotha G.V was a heavy bomber used by the Luftstreitkräfte during World War I. Designed for long-range service, the Gotha G.V was used principally as a night bomber. This model can be used as bomber unit for world war 1 map.

The model is Team colored.

Models 1 Spells 1
You don't see planes like this every day... Well made and rightfully amazing in concept. I do feel like it could use more animations - such as flames when damaged - or Explosion(s) upon death - perhaps making it split into pieces on 'impact' as a form of second variation death. Many things can be added still ^^

Icons 4
Are you planning to do any other planes?

Models 57 Icons 12 Maps 14 Ported Models 1
Not at the moment. Do you need any specific kind of airplane ?

Icons 4
Not at the moment, just thought I'd ask.

Models 192 Icons 126 Packs 7 Tutorials 2
There are several issues with the model:
- The model should disappear at the end of the decay animation.
- The model should have a collision shape.
- You might want to add a proper background portrait plane
- Remove the unused assets in the model.

Please fix the issues above.

Maps 2 Template 1
YEEEEEEH
WW1 BOMBER
Could you make a WW2 bomber as well ? There's so few which are Team-colored, lightweighted and animated.

Xeryxoz said:
such as flames when damaged - or Explosion(s) upon death - perhaps making it split into pieces on 'impact' as a form of second variation death
Click to expand...

Some Stand and Walk variations would be nice too. I also feel like the gun moves too slowly while firing.

Additionally, the plane hangs in the air while decaying instead of crashing to the ground. It should fall lower in the death animation, and decay adjusted accordingly. Alternatively have it explode instead.
Unless there are object editor settings that need to be changed? In that case, maybe add a note to the OP?

The rotors sometimes snap back into place when changing animations. This is normal in WC3, but in this case it could possibly be fixed by having the rotor movement in a global animation instead.

The icon could use a little bit of polish too, it looks a bit pixelated right now.
You must log in or register to reply here.

A
[Miscellanous / Other] Heavy bomber prototype

D
Any TIE fighters or Bombers out there?