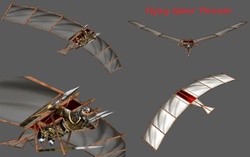 Model info:
I made this for the Modeling Contest #17.
I took the base idea of Leonardo da Vinci's flying machine sketches, but made my own concept out of it. For usage as military unit I added the spear ballista.
The model only uses ingame textures and has a portrait camera, team colour and the standard animations (Stand/Walk/Attack/Death).

Background lore:
Only the stongest warriors can become Flying Spear Throwers, as it requires a lot of strength to hold the kite up in the air. But as the kite doesn't need any noisy engines, the Flying Spear Throwers can follow their prey unrecognized by silently gliding far above it and then striking down unexpected at a low angle. For weight reduction, the warriors are only equiped with light leather armor which however makes them vulnarable to enemy archers. To make up for this weakness they are armed with heavy spears which are fired off by an attached ballista. But because of the fixed angle of the attached ballista the Flying Spear Throwers can just attack ground units and are nearly defencless against other air units.

Pls give credits, if you use it in your map.
Have fun with it