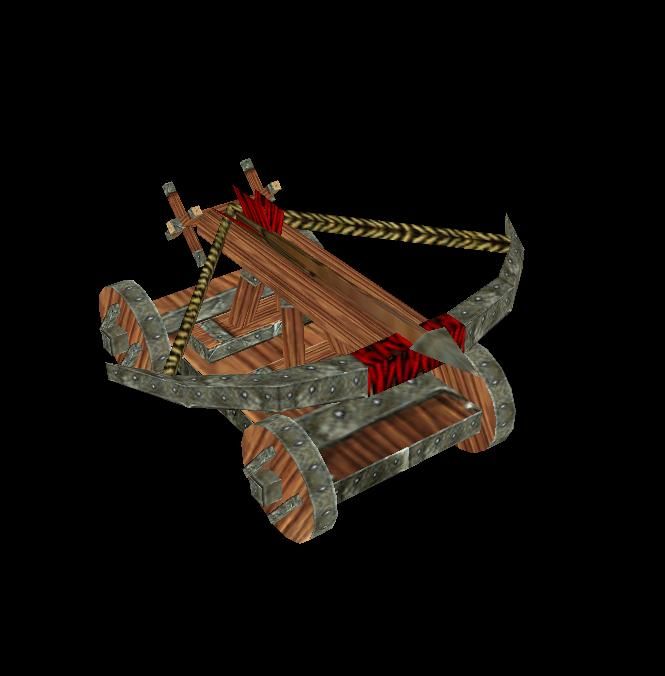 This bundle is marked as approved. It works and satisfies the submission rules.
View usage Statistics
Reactions: deepstrasz, Strydhaizer, Tickles and 7 others
After the previous model (Ballista-Catapult) I decided to made this type (Ballista-Scorpion). Updated: added wiggle in walk anim, added teamcolored plumage, improved the bow and wheels.

How to import this model View in 3D Sanity check More info
Reviews
06:12, 6th Feb 2014 MiniMage: The reload after the attack is a little slow. Fix this. Just after the arrow has been launched, a new arrow should instantly be dragged back to the original position. I don't see the reason for the wait between the...
Read full review...

06:12, 6th Feb 2014
MiniMage: The reload after the attack is a little slow. Fix this. Just after the arrow has been launched, a new arrow should instantly be dragged back to the original position. I don't see the reason for the wait between the reload and the firing.

Models 147 Icons 1 Packs 4 Skins 2 Maps 1 Spells 3 Tutorials 1
Man, you make some really useful models. I would rep you again if i could.

Only thing i think you should improve is the death anim, it would look better if it had more movement to it. Perhaps you could make one of the cranks fall off, the top section tilt, or one of the front wheels tip to the side/roll off, just something that makes it look more as if it is broken than just getting a flat. Also, you should really, really add some particles.

Models 116 Icons 7 Maps 1
Thank you! I was a little improved Death animation. Now the crossbow comes off and moves forward.

Maps 1
Nice, there are too few siege wepons on Hive.

Packs 1 Maps 20 Template 5 Tutorials 1
Great model. Love the rope even though its not that visible in-game.

It points straight forwards, making it not very useful as a siege weapon, though. An alternate animation with it angled would be nice.

Still, despite that, I do quite like the animations, especially the death animation. 4/5.

Maps 3
There's a ballista model before in this site. But this is better.

Models 2 Skins 1 Maps 5 Templates 1
Thanks for this model !

Interesting model
5/5. Doesn't need a reason why model deserves this.

Models 35 Icons 3 Packs 1 Skins 1 Tutorials 1
Good improvements. The TC plumage on the arrows are a nice addition. Although isn't that a lot of feathers for only the top of it? The slight walk wiggle is a matter of opinion, to me it's neither good nor bad; on one hand, people perceive extra movement as "more lifelike", and on the other hand, it's a machine, the only reason for it to wiggle would be either A, to be poorly built & rickety, or B, to be moving over uneven terrain, and in the case of moving over uneven terrain, that would already make it tilt around. Just my opinion, though.

The wheels and bow look better.

You still might want to add a slight angle to it. Physically, if it fires directly forwards, gravity will pull the projectile down in a heartbeat. Even a 5 degree incline would make a massive difference. Granted, there are no physics in the game, but it would still look weird. In-game this will either A: From a flat angle, fire a projectile that somehow arcs, B: Fire a projectile directly ahead that seemingly defies gravity as it floats across the battlefield, or C: Fire a projectile that is physically accurate but drops at a crypt fiend's range.

I know Scorpions don't have a huge arc, but if you look closely at any real-life scorpion, you'll still see a slight incline.

Maps 4
No portrait and it shoots straightforward. There's no arc in the attack animation.
4/5.

Good ballista. Perfect.
But who does know the correct x,y,z manipulations in the editor so that it would work perfectly on the anims?

I find my math to be still improper to see the result of its anims.