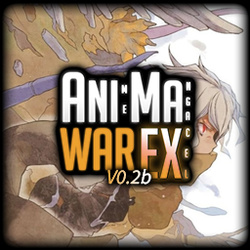 Welcome to Ani(me)Ma(nga) War Ex(Cel), a bit different from your typical AOS map with extra objectives and different from your typical anime map (Aka, not spellspamming 2bright4youreyes stuff), this is the BETA version which is at most base features complete and fully fleshed out characters etc, the aim as in any AOS map is to destroy the enemies power crystal, however there is an optional point system that adds more objectives to the game as if you so choose. 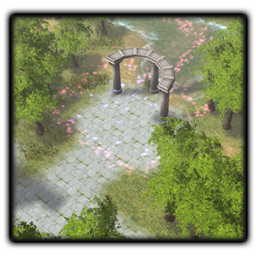 Shrines are a capturable point on the map, 4 of them exist in the northwest, southwest, northeast and southeast forest.
At every 1 minute interval, if there is no shrine active on the map one will activate randomly, becoming capturable; To capture a shrine stand in the circle at the targeted point until the number reaches 100 for your team, more heroes mean shrines will capture quicker, however enemies can stand on it at the same time to prevent the number from going up.
Once a shrine is captured a shrine sentinel is spawned for the team which will act as a vision giving unit and will attack nearby enemies, for the time that the shrine is alive you will generate Dragon Vein Power, which is signified by a number above your teams power crystal; once the DVP reaches 100 your team will spawn a wave of strong siege creeps down the lane.
The enemy can destroy the shrine sentinel after it has spawned, giving them 10 DVP, so defend your sentinels to get the most out of them. 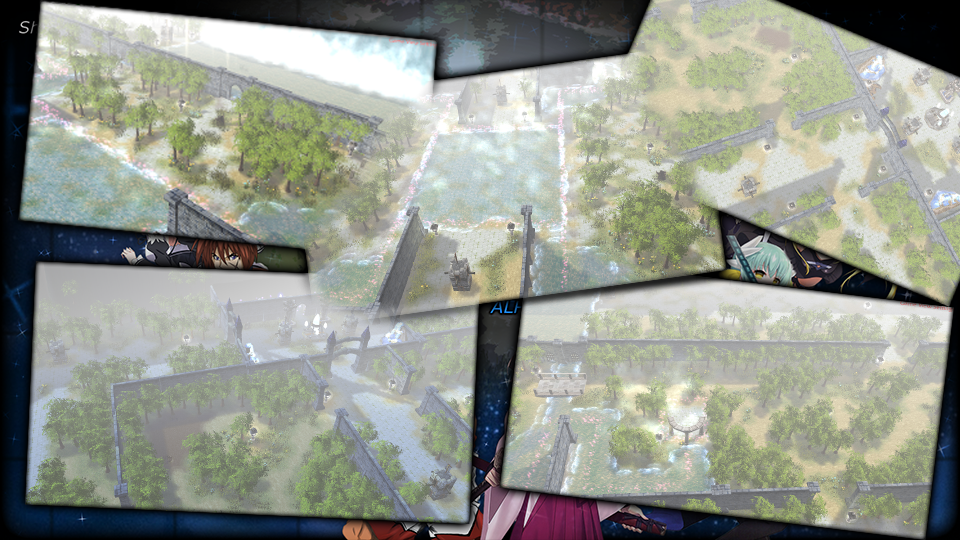 Bug reports go to me here, either of the pages above or my email @ The10thx@gmail.com


I'm gonna be honest, i keep forgetting to write down what the usernames of the model creators are so sorry;

That said i'll list all i can remember upright, and if you see anything of yours used without credit, give me a shout and i'll have it added by the next version!

Rest is for general fx etc

Okay i have a terrible memory, sorry again ;(


Fixes
>Items
-Fixed Worn Band giving Agility instead of Strength
-Fixed Murasame's having an active and charges
-Fixed some hero portraits that didn't have a border
-Fixed some Fog of War glitches in the center area
-Fixed (Should have) some crashes involving Gilgamesh
>Heroes
>>Sasuke
-Changed how Chibaku Tensei moves units, shouldn't lag now
-Fixed Chidori effect not showing when in Susanoo form
>>Kenshin
-Changed how Kenshin's Amakakeru Ryu no Hirameki moves units, shouldn't lag now
>>Akeno
-Lightning effect bug fixed for Q and W where sometimes they wouldn't show after meeting certain conditions
Changes:
>Misc
-Moved Secret Shops to the jungle on the respective sides
-Revamped hero descriptions to be more useful and detailed
-Base Heal adjusted from 10/5 HP/Mana /S to 100/50 HP/Mana /S
-Hero Taverns split in to three, based on the heroes main stat
-Networth calculation changed, previously based on total amount of gold earned, now based on current gold + held items
>Items
-Improved descriptions of all items with flavor text and more detailed information
-Shunpo Dagger cost reduced to 1200 from 2000
-Shunpo Dagger cast range increased to 2000 (Effective range is the same)
-Tango heal time reduced from 30 to 10 seconds, heal amount from 300 to
250
-Clarity Potion renamed Mana Potion, now restores 300 mp over 20 seconds up from 200 mp over 45 seconds, doesn't dispell on attack
-Healing Salve renamed to Health Potion, now restores 600 HP over 20 seconds up from 450 HP over 45 seconds, doesn't dispell on attack
-Cursed armor no longer has the minimum damage amount, reflected damage from 10% to 20%
-Inferno Lantern now proccs on hit rather than when the attack is initiated (Using my own system i made), damage from splash increased from 50 to 100, dps from 5 to 10
-Gem of Truesight renamed to Seeing Stone, no longer drops on death, can be sold, gold cost up to 1500 from 800
>Heroes
-Adjusted Base Stats for large majority
>>Pest
-Reduced Black Deaths damage from 0.03% per level to 0.015
- Disease Cloud damage reduced from 60/75/90/105 + 20 DPS to 40/60/80/100 + 15
>>Yami
-Capture's pull speed reduced by 75%
-Graviton Cannon changed from a instant line to a wave spell
>>Rem & Ram
-Increased speed of Chain Grapple, Now also slightly pulls the target unit towards Rem; Changed FX
-Removed cast time on Al Huma, increased speed, improved FX
-Chain Flail changed to Crush, deals bonus strength damage on hit, knocks back and slows
-Mana Channeling (R) changed to an active that drains mana from surrounding units and heals, granting bonus STR to Rem
-Ram's E now provides heal amplification rather than straight heal
-Ram's R now draws targets in rather than creating a wall around the target
>>Issei
-Removed Divine Wyvern Fairies, former Passive
-Added Solid Impact Booster [Active/Dash Knockback]
-Added Dragonification [Passive/Volatile Buff]
-Boosted Gear is now a default and works differently
-Dragon Shot now explodes on impact
-Balance Break is now a default ability that scales with his level
-Longinus Smasher's fx has been adjusted and now shouldn't lag the game (Dummy units converted to special effects)
>>Akeno
-Removed Conduit, replaced with Concentrated Lightning, a global lightning strike
Additions:
>Misc
-Added Preload
-Type (-nw) without the brackets to check your networth
>Heroes
-Added Bell Cranel to the hero pool
>Items
-Added Touda/Beast Lord flute and Mist People's Teachings, a line of items with summonable units
-Added Jeweled Pendant/Jeweled Sword of Zelretch, a line of items with a mana restoration ability
-Added Bael Family Crest/Lion King's Armor, a line of tank items with extra evasion
-Added Samehada, item with a good stat bonus along with % mana burn


-Two new heroes, Sasuke [Boruto Ver], Pest [Mondaijitachi]
-Shrine system improvement with boss summoning:
"New to 0.2 is the boss summoning system, in the centre arena of the map there are 4 circles of power that will light up when the corresponding shrine has been activated (E.g. NW Shrine activates the NW circle), once all four circles have been lit up Gilgamesh will spawn in the center of the map, when killed he will give a Gold bonus, give everyone a buff and drops the item "Flower of Immortality"."
Once the boss is defeated, the shrine sentinels will be destroyed and the system will reset."
-New CTF Mode:
"Capture the flag mode, it's a straightforward mode, you are placed in an arena with two opposite castles, enter the opponents castle and get their flag to yours to get a point, reach the point limit to win.
It's not that easy however, anyone holding the flag will constantly be hexed, each team can activate a forcefield around their castle to keep anyone in or out, and levers can be used to destroy bridges across the map to prevent passage."
-A tonne of bug fixes
-A tonne of rebalances to both heroes and gameplau
-Probably some more i forgot (I lost my changelog halfway through, but there's too much to go over, just think of this as a new map altogether)
Changelog V1.0b:


Fixes/Changes:
-New LS, simpler design
-Hidden the Select User in tavern
-Hero select CD from 30 to 10 Seconds, game start down from 60 to 30 seconds
-Hero now correctly centres on the unit upon pick
-Added ability to pan camera to your hero by pressing Space
-Fixed Kenshin's ultimate being able to move buildings
-Fixed interactions with Akeno's shield causing lag
-Changed some of the effects of Kiyohime's ultimate to SFX instead of dummies to lessen any potential lag
-Changed interaction with Rem's W, it's ability to be used will be reset on causing damage making it no longer spammable
-Fixed the damage of Yami's E to only be dealt once rather than multiple times
-Fixed Katana, Katar, Vorpal Blade and Metal Glaive not being included in triggered damage calculations
-Lowered the Terrain on bottom lane so it doesn't obstruct the camera
-Removed the collision on the portals next to the secret shop
-Tier 1 tower base damage reduced to 45, Tier 2 down to 75
-Foot Soldier armor reduced to 2 from 4
-Increased the Leaderboard size for names

Anyway, as an end note, I'm happy to finally release a proper version of this map, more updates will be coming with more heroes and other changes, other modes planned for later versions once i get this up and stable and fully out of BETA, this is my first map release where i can say that i put a lot of work in to fine tuning stuff, but haven't had much people to test it with, so if you find any bugs please report to me with them and i'll get it fixed asap!

deepstrasz
Resources in Use by AniMa War Ex V0.1 BETA | HIVE To help you add all the other people necessary in the credits list. It's difficult to properly read the text on the loading screen because of the image. I think you might be able to remove the Select...
Read full review...