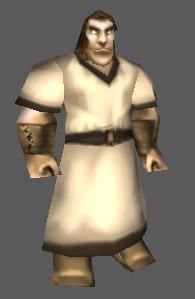 This bundle is marked as approved. It works and satisfies the submission rules.
View usage Statistics Legacy download
Reactions: Barsbold, Gregory Tountas, Azsure and 4 others
This is an edit of .KC's 40 animation villager, done by request

i've notified .KC, if he is bothered by this i'll take down this model

Update:
removed the standing corpse and pickaxe geosets that weren't being used in any animation. also removed keyframes outside of animations,
reduced filesize: 359kb to 102kb 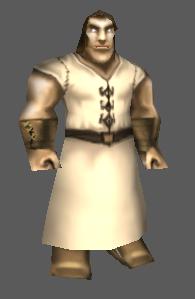 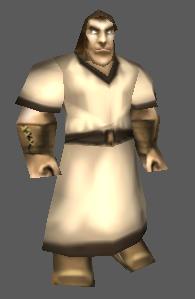 How to import this model Sanity check More info Download
Reviews
Frankster : Although it is not really your model, I can use some usefulness in this model. Works in-game and performs well. Approved.
Read full review...

:
Although it is not really your model, I can use some usefulness in this model.
Works in-game and performs well.
Approved.

What the? Please make his clothes black, give him sunglasses and he would be a perfect matrix character. That would be straight-out kickass. ^_^

Icons 3
The robe looks too flat. Mabye make a custom texture. But I think it could be usefull to make the ppl of a village or a town a littl more different from each other.

Maps 1
Smaller in file size then the original and so very useful and it has custom clothing, approve it!

Idea: Perhaps to add to the complexity of the model from the original and help get approved maybe make the robe team coloured?

Models 36 Icons 8 Packs 2
Rewrap the gown and I think you're golden.

Levdragon said:
Smaller in file size then the original and so very useful and it has custom clothing, approve it!

Idea: Perhaps to add to the complexity of the model from the original and help get approved maybe make the robe team coloured?
Click to expand...

i don't care that much about this model, frankly i think the villager model is ugly. i did this to fulfill a request and thought others might find it useful, so i uploaded it.
i'm pondering doing a rpg set with a human adventurer and several replaceable textures for armors, based of the priest model that i think is much better proportioned, but i'm currently busy with other stuff, so don't hold your breath

Edit is too simple,and need a reworked wrap on the clothing

Hmm, I can use this for sometimes.

Fear the man with robes!

Licheus said:
What the? Please make his clothes black, give him sunglasses and he would be a perfect matrix character. That would be straight-out kickass. ^_^
Click to expand...

kinda simple, maybeuse the peasant or peon textures, maybe even an acolyte. Just not the normal stuff

Models 1 Packs 1 Maps 11
I only see a man-skirt, the robes aren't robes. Try adding a cape or hood.

Models 2 Skins 1 Maps 2
This is really a WTF moment when i see this model.
You should pick another texture for the skirt, it look way too flat.

Models 3
updated
you can get the old model here

Models 62 Icons 7 Skins 1
I love his brand new t-short
To be serios, place where his robe ends and shoulderpads begin have stitches

Models 11 Icons 1
Looks way better than the old one, nice new texture, proper long sleeves and a nice shiney (not) new trim. I wonder if I can use somewhere
+rep

Models 2 Skins 1 Maps 2
It look better now. A healthy man in the village.

Models 1
his bracers still has stiches on it,try to remove it.

Ah, nice. If someon uses .KC's Villager for a RPG you now hat have the option for a robe wearing one. Perfect for mages.

killerjel1 said:
his bracers still has stiches on it,try to remove it.
Click to expand...

Models 1
i dont like it.and because he looks clean but the bracers do not

Maps 2
I think the model is a fine addition, and frankly I'm glad there is a bit of variation to the general use of the "VillagerMan" model. I think this villager looks more ancient (ie. greece, rome etc.) and would work good as a good hoplite unit. Unfortunately, there are no animations for spears specifically, and so (even though the spear was the main weapon of the ancient world, warcraft has no units using them) you should use the "channel" animations for that purpose. Also, another unfortunate thing is that only "flesh" and "channel" swing with their right hand and so some shields will not work with this model, being due mainly to the fact that Blizzard seems to make most of it's animations left handed ( I know it's odd but their are "right handed" shields on THW's database). I do realize that these "bugs" are not your fault however and that Blizzard is to blame. As everyone else has said the new sleeves are nice and I can't see any bugs aside from an odd wrap around places, but this is only noticible upclose around the waist, and my villagers will be wearing plate . Plus ingame it is unoticable and with how odd blizzard made some of it's skins (and the meshes, footman is a good example), this is definately at least a 4/5. Good job for a simple, yet useful edit. EDIT-Oh yea and +rep for such a useful model, that I will probably use in hundreds of maps.

Maps 12
I wonder it would be nice if you can create a female version of this.

Models 195 Icons 24 Maps 7 Spells 7 Reforged HD Icons 1 User Interface 1 Tutorials 2
Amazing. I was going for practicality over the 255 anim model in the section( no offense), stumbled on KC's smaller but more practical for small games version, then saw this.

Icons 1
I think this is perfect for a RPG. If i would be making RPG after current project is finished, i will use this for sure.

Maps 1
Fantastic, big thanks for uploading this. I wish there were more model versions with this amount of anims, this file size and for which villager attachments work.
You must log in or register to reply here.