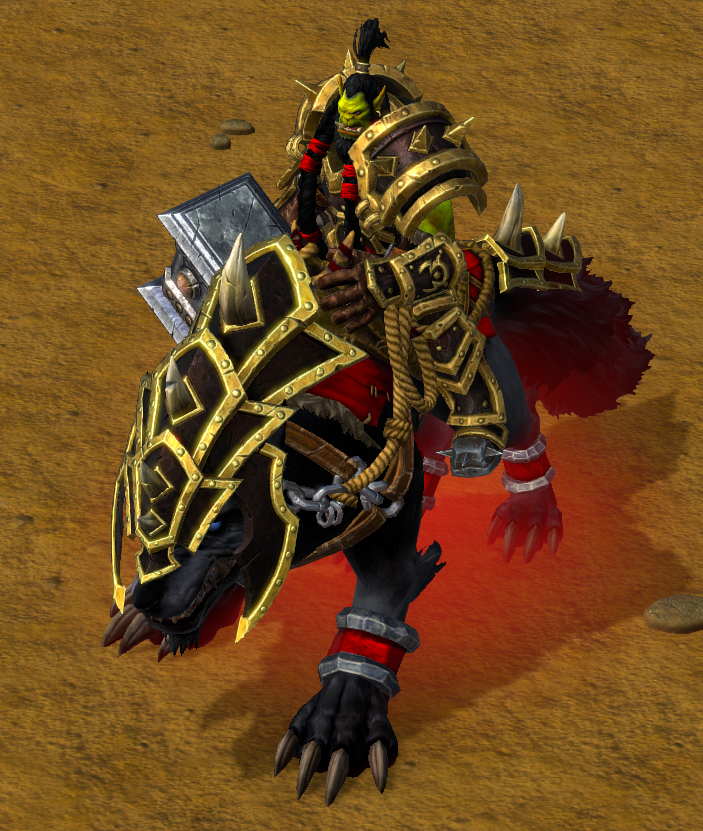 This bundle is marked as pending. It has not been reviewed by a staff member yet.
View usage Statistics
Reactions: Archian, Flinn, rangger16 and 3 others
I wrote a one-off computer program script to generate this model a while ago while discussing it with some guy on Discord.
Essentially, this model recycles the mesh of the Spirit Wolf but with the animationset from Thrall's wolf and Thrall riding on it.
In particular, the "matrices" tab on the Retera Model Studio program does not really work for Reforged HD models, so I am not sure it would be possible to make this model exactly like this on Retera Model Studio without a lot of work. But, since I had the sourcecode and was able to add a feature to bind one wolf onto the other wolf's skeleton, creating this probably wasn't as difficult for me as it would be for the typical Retera Model Studio end-user.

The model is actually from July 18, 2020, but I found it on my hard drive and it occurred to me some other users might want Thrall riding on a black wolf. In addition, this model uses only in-game textures since it is not a retexture of the wolf and is actually the Spirit Wolf model with Thrall on top.

Feel free to edit this however you want. Maybe you want to stylize it similar to the old Reign of Chaos Thrall model even moreso? Go ahead. If you feel like it, you can give credit to me for writing the program that generated this, but then again, if you don't feel like it that's fine, since it's basically just a rehash of Blizzard assets.

Also, I noticed while testing in-game today that there is some weird flickering going on with the hero glow in certain animations. It seems very faint, but it is not present in the in-game Thrall model with the white wolf. Feel free to research that and fix it if you like. Since it's been 6 months, I have no memory of why that flicker might be happening.

(I did not include a portrait file because you can just use the in-game Thrall portrait for this model!)
Contents

Reforged HD Models 2
Did not quite understand. The biggest obstacle in this case would be the conflict between the "bones" of the two wolves not exactly coinciding?
Or are there new animations from SpiritWolf itself fused with Thrall?
Because in my view, the differences seem to be minimal between the most whitish wolf (original Thrall) and the Spirit Wolf, except for the armbands with T.C, in addition to the black texture.

Models 49 Skins 1 Tools 5 Maps 9 Templates 1 Reforged HD Models 16
Yeah. You can imagine conceptually that there is 3d mesh and also the animation skeleton it is bound onto.

There are 2 options to make a model like this. One is to port the animations of Thrall's white wolf onto the animation skeleton of the spirit wolf. The other option is to port the 3d mesh of the spirit wolf to be bound to the skeleton of the white Thrall wolf, discarding its original animation skeleton but using those original bindings to determine the bindings onto the Thrall wolf skeleton.

This model was made by attempting that second option, as I recall.
You must log in or register to reply here.

Grom With Doomhammer Riding A Wolf.

Thrall (Mountless) with Spell and Attack