The Wrath of Nalfemaht V2 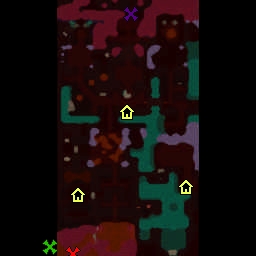 This bundle is marked as useful / simple. Simplicity is bliss, low effort and/or may contain minor bugs.
View usage Statistics Legacy download
I used hald Devil May Cry and half Warcraft scenarios. I added music to last two main bosses that's because size is 10mb.But it has a good game-playing and trigger system.Map might be boring and hard at first but it will be really enjoyable then.You can understand the story from description and the books I put on the map.I took all the models, spells and icons from hiveworkshop I gave credits in the end but I want to thanks all the owners.All credit is theirs.

Update: my world editor was old wc3 data and it wasn't fixed completely new map is totally made with 1,22 patch-many spells fixed-bosses are edited.

"lichborne" given to death knight with many buffes game become more fun.buff efects are changed.

not:I changed camera to rpg camera system but because of the map's design camera didn't fit.especially in boss fights I had to make it normal again.

not 2:use devil trigger and nalfemaht state(darksword's power) together it may cause fatal error..


...and and and with new skills game is funner than first version don't

The Wrath of Nalfemaht V2 (Map)

Maps 6
can you plz tell me how you shrunk the music size??

Maps 3
I converted the music with the lowest quality it is smallest size.

Packs 1 Maps 35 Spells 8 Tutorials 5
Is this a singleplayer or multiplayer game ? If it was multiplayer game, it would be pointless for it to be 10mb size since the max file size allow for at LAN/Internet is 4mb.

Packs 1 Maps 35 Spells 8 Tutorials 5
After I view the trigger, it was poorly coded till I do not know where to begin. To make it simplified, I would take a example of 1-2 of your bad coding which I found in your map.

You can just set it this way.

To make it worst, you did not credit those author of those resources you used; which naturally breaking the rules of this site.

Maps 3
whats the difference?...its true I'am not good in trigger but function is running. And I give credits to authors on the quest menu(F9) after defeat of Nalfemaht(final boss) its become visible.and you give 1/5...

Packs 1 Maps 35 Spells 8 Tutorials 5
First of all, we have something that are called as quality and bug control. Having a defective coding would not make the game any good even if it does function.

For 1 fine example would be spawn system, creating a defective spawn system where the memory leak doesn't destroy would make the entire game laggy during the late gameplay.

Writing such a message is hardly consider as a credit, but more at where you get all those model.

Also, the victory condition immediately execute the moment the boss die. So, how do you expect the user to read it ?

You can argue that I am wrong about this, but save your tongue and tell it to the staff of hiveworkshop. What I am telling you are for your own good, if you do not like it and doesn't want to accept it; your map making skill would be nowhere to go.

Maps 3
you are right about victory condition and ı tought about it. This is my first map. first time ı am using trigger and despite of its being the first, this map is good for my first experience.

Packs 1 Maps 35 Spells 8 Tutorials 5
In my opinion, it isn't. I have seen a maze created by newbie which are develop quite good with just a minor flaw on it.

You have to do more research if you wish to develop a nice map.
You must log in or register to reply here.

Wrath Of The Lich King

Wrath Of The Lich King

Wrath of the Sea Witch