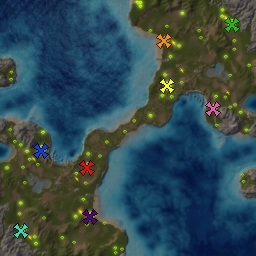 This bundle is marked as approved. It works and satisfies the submission rules.
View usage Statistics
Supreme Commander is a Warcraft III map immitating the GamePlay of the original game Supreme Commander by THQ. To make the player feel the authenticity of such a great game, this map contains a very elaborated constant gravity based projectile system opening the possibilty of collision with terrain and shields, combined with a revolutional ressource system as seen in the original game. Besides that it creates the right ambience through the use of original game music and imported game sounds making the map a whole new experience of playing Warcraft III. It even contains details such as crashing planes which deal damage to nearby units when colliding with the ground depending on their size. Aside from the amazing game engine nearly every unit known from the original game is included in this map. Land, air and marine units of all 3 tech-levels and an addional tech 4 level for experimental units such as the monkeylord or galactic colossus. All unit data is based on the original game and most of the units even have scaled values of the original units.

I have seen people loving this map from the first moment when they had watched the intro, however, the complexity of the map sometimes overtaxes impatient players. My recommendation is to get into the game after playing once or twice, because then exciting battles will arise.

Post Scriptum: I made this exaggerated description for fun, however, except for the euphoria all of the content is true.

It would be nice to see some of you posting feedback on this map. Anyway, I cannot guarantee I will continue working on this for long.


There are several other terrains to download from http://supcom.btanks.net/

Map Info View Resources In Use Preview Triggers
Reviews
ap0calypse: Approved The gameplay is very good, yet another terrain, but it probably makes it interesting. Good luck.
Read full review...


The gameplay is very good, yet another terrain, but it probably makes it interesting.
Good luck.

Hey, are you guys ever gonna make different factions, like in the game?

Maps 10 JASS 1
I am only one person, and No, no other factions.
There arent enough models and I dont think that the SupCom factions are too different.

The only thing in that direction could be a tech tree where you specialize on specific unit types, but dont expect it to be included in the next version (if theres one)
You must log in or register to reply here.