Passive ability with a cooldown (attack-based)

I seen many people posted some threads about it and most people who knew how to make a passive ability with a cooldown wouldn't answer it, so here are the tricks to do this yourself (example:Geminate Attack from DotA!(Well IceFrog's spell is triggered too, but making the passive cooldown is the same like the one provided in this tutorial))

Well the trick is actually simple, NO TRIGGERING SKILLS NEEDED!
Yes i mean it, even if you have no actual knowledge about triggering, and you only know HOW to use Object Editor etc etc, you can make it.


So lets get started

What will you be needing:
-World Edit
-Knowledge about the Object Editor
-A Brain 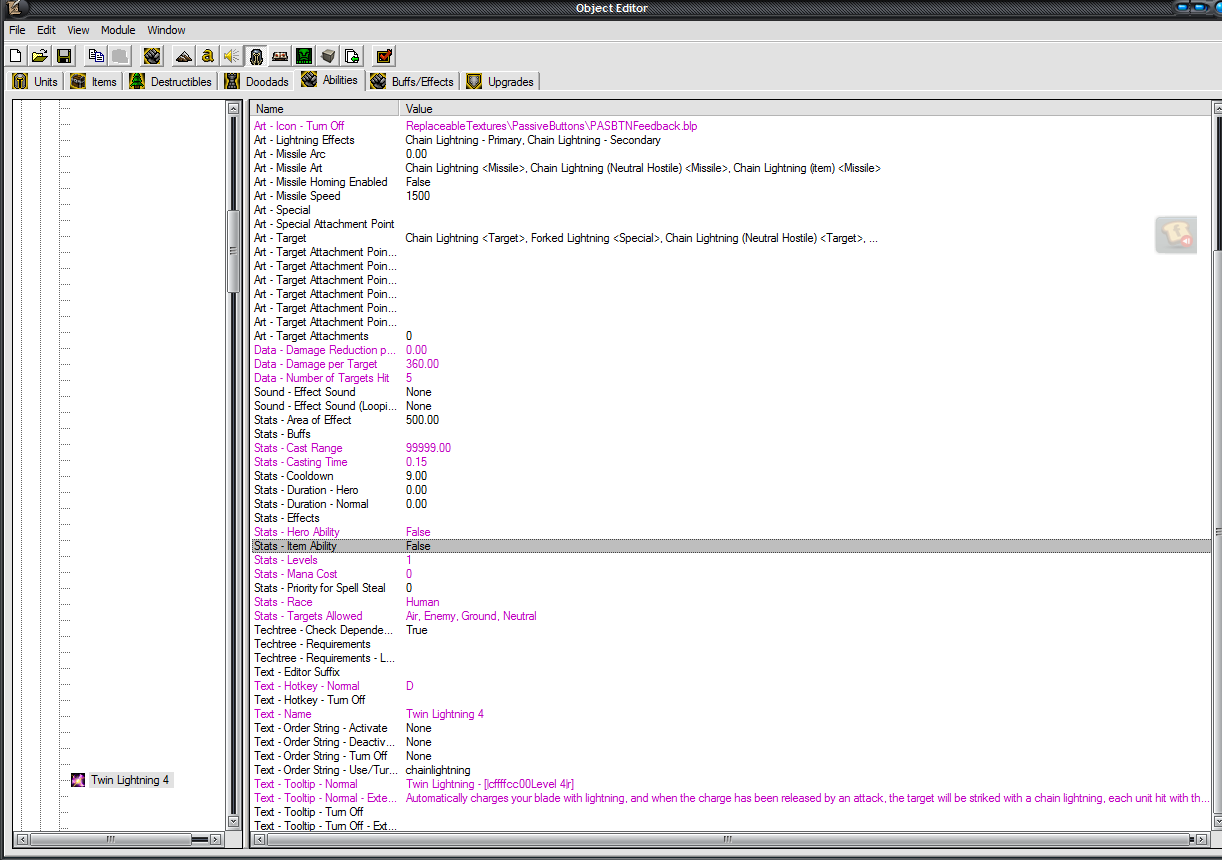 Now create an ability based off the Orb of Lightning. 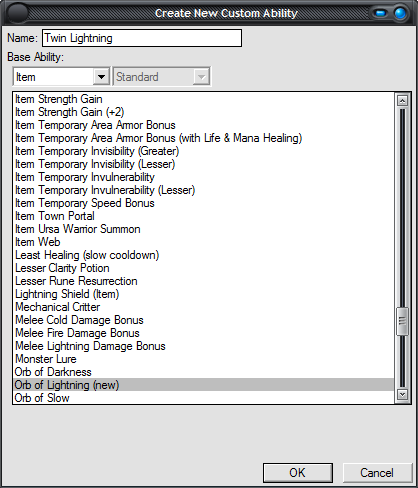 Set the "Data - Effect Ability" in the ability you've just made to Twin Lightning or what name/ability you want, you can set the chance too, it's all yours 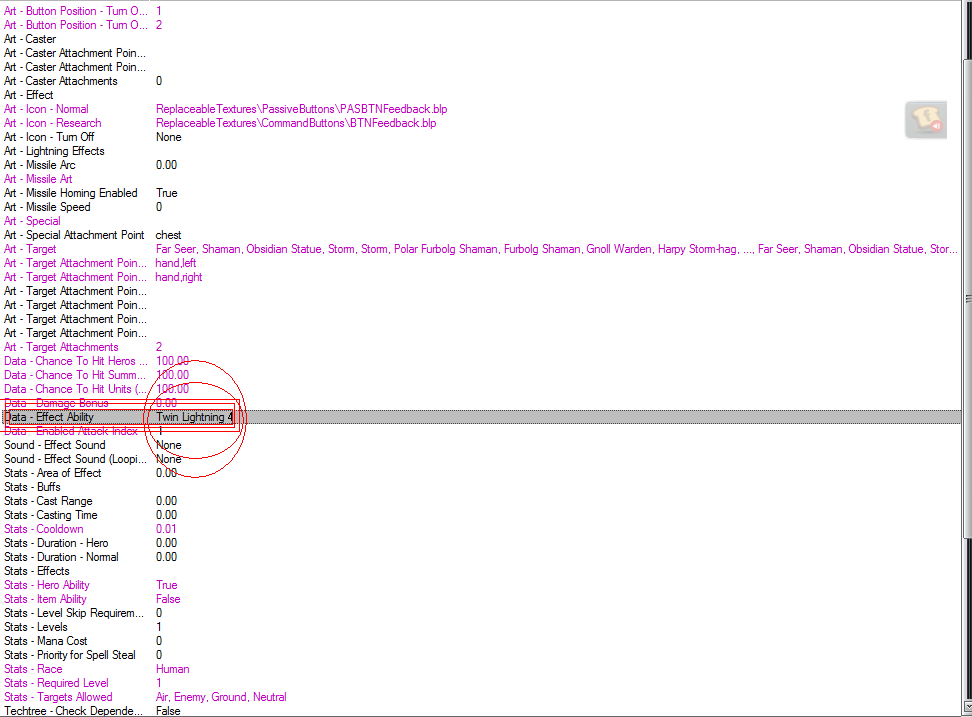 I guess that covers it all, let me show you a gameplay screenshot if you don't believe me 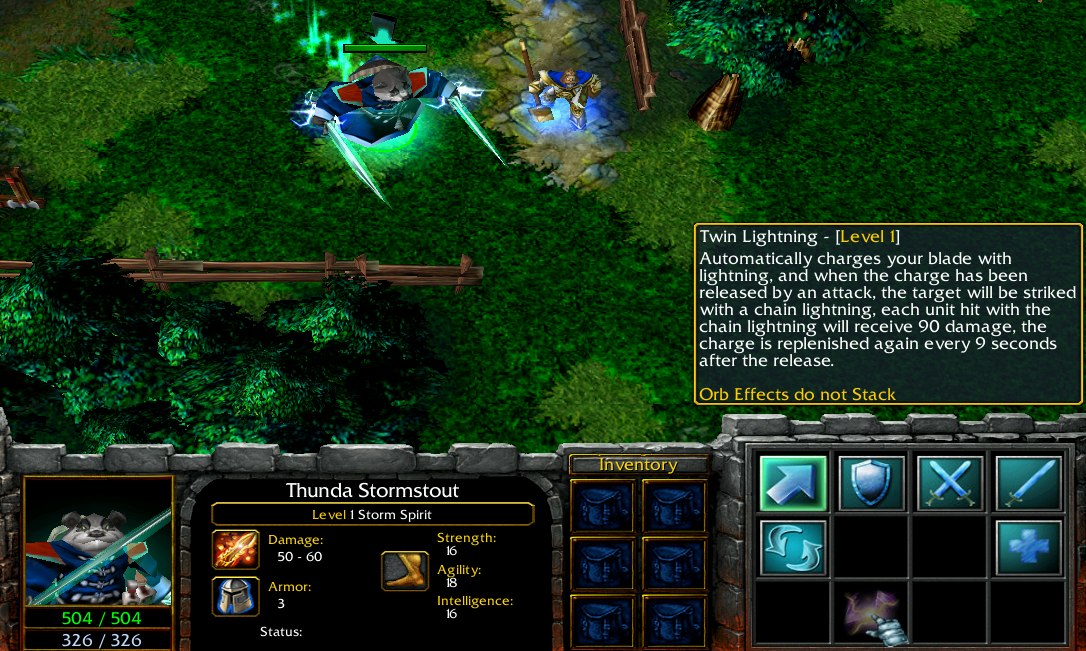 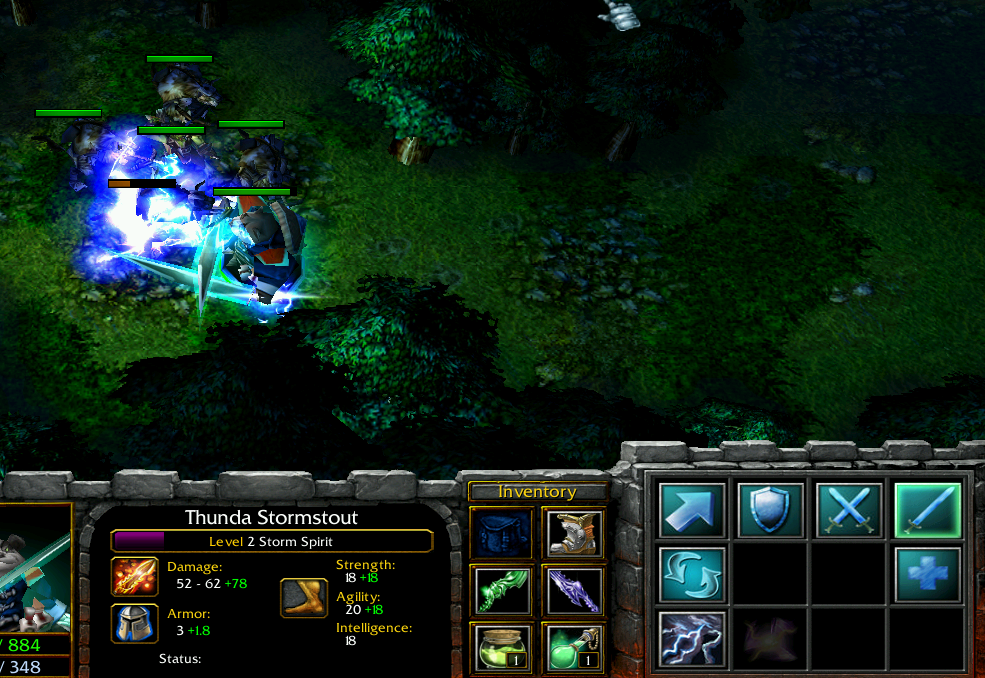 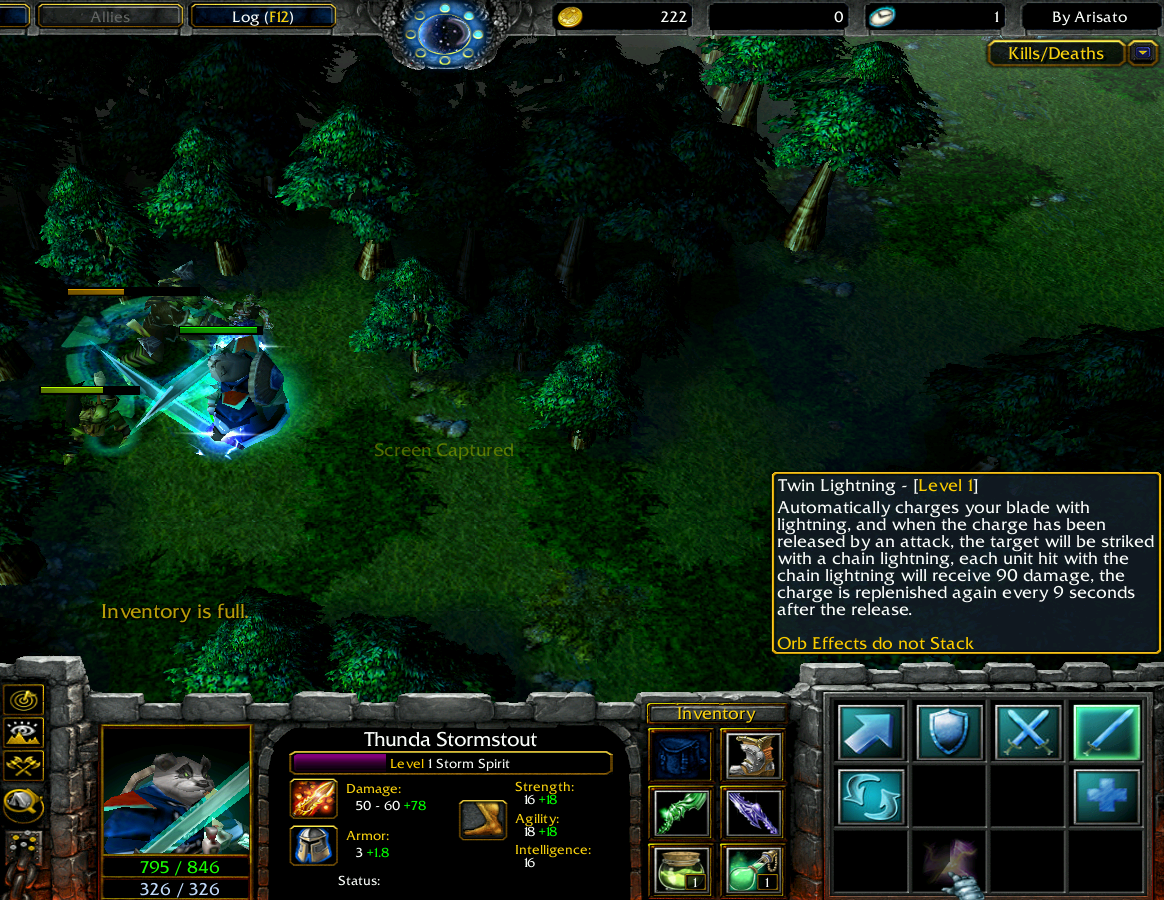 And make the other disabled version have a path of:
ReplaceableTextures\CommandButtons\PASMyPassiveAbility.blp

Then in the object editor, assign it to the icon with the path:
ReplaceableTextures\CommandButtons\PASMyPassiveAbility.blp

Note that this may appear as green when the game is paused. (I'm not positive about this, but I assume that would happen) However, the problem where it is darkened will be fixed.

Also note that this technique as a whole is subject to whatever bugs/quirks the orb abilities already have.

Icons 1 Tools 1 Spells 4 JASS 4 Tutorials 8
Images in the
tags are not showing up for me. Make sure they are attached to the hiveworkshop and not an external image hosting website.

Spells 9 JASS 1
The reason images aren't showing is because he didn't put any image link there.

Maps 1 Tutorials 3
There are many more types of passive abilities than the crappy onAttack orb.

Models 11 Icons 1 Maps 8 Spells 1 Tutorials 1
What does that have to do with the tutorial?

Maps 1 Tutorials 3
The title does not fit. I was hoping for a tutorial how to generally make passive abilities with cooldown.

Maps 1
The reason that icon gets darker when you learn it is that it automatically becomes a DISBTN type icon. So use a brighter DISBTN can solve the problem, but then when you open the menu then everything goes dark except this icon XD, which is kinda annoying

WaterKnight said:
The title does not fit. I was hoping for a tutorial how to generally make passive abilities with cooldown.
Click to expand...

You can set the ability to be a channel ability , and trigger what it would do, it will still have the cooldown, this is flexible if you don't know.

And Orb effects destroy this skill, missile modifiers don't seem to destroy this ability, (tested a poison arrow + this)

@fakedrake, you can change the BTN into brighter and leave the DISBTN dark, i think that's how i solved it? or vice versa?i can't seem to remember

Arisato said:
You can set the ability to be a channel ability , and trigger what it would do, it will still have the cooldown, this is flexible if you don't know.
Click to expand...

And it will still go only onAttack. But passives can also fire on other ocassions such as a nearby unit dies, the unit gets healed, receives damage/drops below life, casts another spell/uses an item, kills a unit, idles, ...

The problem is that you cannot trigger the ability instantly via trigger, not immediately perform an attack against some dummy unit or get to cooldown otherwise. At least, I do not know of such a way and was hoping to get some clue as I was reading the thread title.

Btw, orb abilities have another bug. If a unit attacks automatically out of a nearby enemy aggravating, not because you ordered it, it won't have an order and orb effects won't trigger then.

Models 11 Icons 1 Maps 8 Spells 1 Tutorials 1
then you can trigger it if a unit is attacked, then order it to attack, but check if the unit has an ability that needs to be ordered to trigger the passive.

Models 32 Icons 7 Packs 1 Skins 5 Maps 36 Templates 1
Maybe you could use "custom" icon and use "wrong" paths so the DISBTN icon looks like BTN version? Could work.

Remixer said:
Maybe you could use "custom" icon and use "wrong" paths so the DISBTN icon looks like BTN version? Could work.
Click to expand...

Adiktuz said:
it should be entitled, "Making an onAttack passive ability with cooldown"
Click to expand...

@Yes, it could work.

Maps 1 Tutorials 3
Sure, especially to require skill and not just having permanently boosted stats or random and unreliable proc-chance.

eubz said:
Is there a need for passive abilities to cooldown?
Click to expand...

On Thread
When I first enter this thread, I was hoping that when my unit walks about 500 range away, it will trigger this ability itself and has its cooldown (judging by the thread topic name...)

But, it's truly misled me as this only occurs when it's onAttack by referring to WaterKnight

Something like: Making a passive ability with a cooldown (attack-based) ?

Models 3 Icons 2 Packs 1 Tools 1 Maps 3 Spells 17 JASS 2 Tutorials 1
@eubz: Once of the popular maps that has it is DotA, Nerubian weaver's Geminate attack uses this kind of mechanic...

@OP: And again and again, we want you to rename this thread please...

Icons 1 Tools 1 Spells 4 JASS 4 Tutorials 8
Sorry for the lateness to review. I have checked this out and it seems like a workable technique. I changed the title to "Passive ability with a cooldown (attack-based)", hopefully that is okay. Usually you don't have to have the "Making a..." part since it is implied. (since the thread is a tutorial)

However, you should make a note at the end, preferably looking something like this:

And make the other disabled version have a path of:
ReplaceableTextures\CommandButtons\PASMyPassiveAbility.blp

Then in the object editor, assign it to the icon with the path:
ReplaceableTextures\CommandButtons\PASMyPassiveAbility.blp

Note that this may appear as green when the game is paused. (I'm not positive about this, but I assume that would happen) However, the problem where it is darkened will be fixed.

Also note that this technique as a whole is subject to whatever bugs/quirks the orb abilities already have.
Click to expand...

You can actually just use that text directly if you want, and I'll approve.

Maps 9 Spells 31 JASS 2
orbs doesnt have cooldowns coz it triggers on each chance, so the title is misleading,
a real passive cooldown however is triggered with timers, but this is very useful indeed...

orbs doesnt have cooldowns coz it triggers on each chance
Click to expand...

Or I just misunderstood you ?

Well, it is called as cooldown because it will trigger each time you ordered an attack.
Just like spell, when you order it to cast, it will fire but can't be re-fired when it is in cooldown, same as for the orb.

Well, it is called as cooldown because it will trigger each time you ordered an attack.
Click to expand...

it will trigger on each chance, chance it triggered by attack ofc...
the cooldown is from the 'EffectAbility' (chain lightning), not the orb itself...

Spells 33
So why do you said that the title is misleading, at first (yes it was) but then again, it was improved to (Attack-based), meaning that this cooldown will proc via Attack (ordered), it seems that it leads us to the right place.

Maps 9 Spells 31 JASS 2
coz chainlightning/firebolt/frost nova, etc...is an active ability...orb is passive but it
doesnt have cooldowns, like the "Data - Damage Bonus" and the 'chances'...

also I may add that you dont need to impost a 'PAS' (passive) icon for the 'Data - Effect Ability'
coz it will be automatically be passive once implemented...

Models 11 Icons 1 Maps 8 Spells 1 Tutorials 1
Actually when the skill is on cooldown it's not orb affected.

But it didn't upgrade every level o.o it only stays at Level 1 - 10 seconds cooldown

This fix does require triggering a little.

For all the people who are complaining that it doesn't fire when the unit starts a fight without an attack order, here's a solution.

A trigger like so:
When the unit is from a tavern (alter this for your Hero pick system), connect the attack trigger to something like this:
If multiple units have the ability, set the *variable for your unit* as an array, but beware that having 20 (or lots in general) units using this trigger system lags badly. Lag causes FRUSTRATION!

Cool Spell Amigo. Is there a possibilty to add that the spelldamage is based on strength for expample?

Maps 4
Thank you for this! It works so nice! Too bad for the icon glitch, but that may be sorted out somehow.
Last edited: Aug 26, 2015

Maps 4
Is it possible to also increase the attack range with the same orb ability?

Models 5 Skins 1 Maps 2 Spells 1 Reforged HD Models 5 Ported Models 3 Tutorials 6
Attack range can only be changed through upgrades, so no.

Worked. Although, there are things in the object editor I didn't understand.
Would have hoped if this tutorial had more details about that.

Models 32 Icons 5 Maps 2
Well, I wanted to make the "Tidebringer" ability from DoTA using this tutorial, but with Passive Abilities its not working, it don't have cooldown. Cooldown only with Active Spells.

been looking for this last year and all i get is triggers, and finally after a year i saw this AND WITHOUT a trigger one bit~