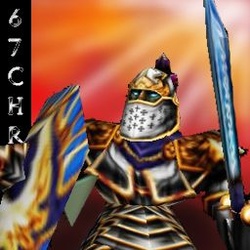 From working on one of my side projects I realized their really isn't any really baddass looking heroic leaders. Sure you could use a paladin or Arthas, but both of them seem rather unarmored and not particularly impressive compared to most other units their next to. So I made this skin for a heroic leader were there really is no question that it is the most ass-kicking unit on the team, without the need for hierarchical scaling.

Originally i wanted to make the breastplate very simple so that the shield spike would look, well like a spike. But it turns out it barrows texture from the entire f*#$%@g chest - from his collar to his waist, so adding any details at all show on it.

The shield is inspired by the blood elve's crest from WoW, the shoulders are supposed to be lions, the gloves have lion heads, and the shinguards have both lions and eagles adorning them.

I even modified the flask so that it looks like a snazzy potion bottle, though I seem to have forgotten to include a screenshot of this. You'll have to test the skin out to witness the potion bottle in use :/

Moderator
18:50, 23rd Jun 2010 Dentothor: Nice job! Another of your skins you've been keeping from us :) The only thing really lacking is the fact that its a bit too detailed. It makes the skin a bit hard to look at.
Read full review...
Reputation Statistics
Page 1 of 2
Show Ignored Content
Page 1 of 2