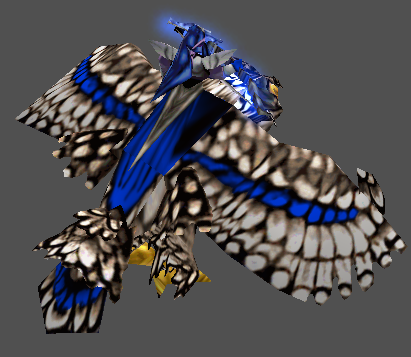 This bundle is marked as approved. It works and satisfies the submission rules.
View usage Statistics Legacy download
Reactions: Charles S. Potter, Verloren, Cuervo de Lebeche and 8 others
This is the Owl Moon Priestess. The icon for this hero is already in the Warcraft III game, located at
ReplaceableTextures\CommandButtons\BTNHeroMoonPriestess.

So, basically while Reforged was being made (back in Spring 2019), I made a caricature of myself by making a Discord server called "Save Owl Moon Priestess." Basically it really grew on me ideologically that if Reforged -- when it came out -- was going to celebrate the history of Warcraft III, then it should also celebrate that history by including characters such as the Owl Moon Priestess from the Reign of Chaos Alpha as a hidden SD model in Reforged for us users to find and discover and use in our custom maps. Also, when I was a kid I had a stuffed owl instead of a stuffed bear, so I was probably just partial to the idea of this model for no good reason.

Our mission statement on this server is that Owl Moon Priestess model file must be added to a future WarCraft III patch as a "hidden model file". This means including it in the archives even if there are no references to it in the game. The reason for adding it is for inspiration and excitement regarding WarCraft III, that is all.

Including a BLP0 or MAX/TGA file is sufficient because the community has War3ArtTools on 3DS Max 5 released by Blizzard from when WarCraft III was created.

The community also has BLP0 parsers. 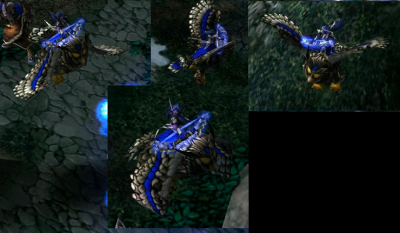 This is the model. There are fan based REMAKE copy models, but the only remaining true version of the model (if it has not been deleted) is held within a Blizzard office for a WarCraft III Alpha build.

You can find pictures of the Owl Moon Priestess hero like the ones above if you dig really hard through the Warcraft III Alpha archives that some fans have maintained in the dark corners of the internet. I attached all of the pictures that I have found of the original model to this bundle, although the primary display icon is a screenshot of my own.

Sometimes when I ask people -- even people who are deep into Warcraft III modding -- if they know of any way to find the original model file for this hero anywhere on Planet Earth, they tell me that I should look here: HeroMoonPriestess

And that's funny because the model at that link is just really clearly a fan-made recreation. It's literally the Priestess of the Moon from the release client of Warcraft III stapled onto the owl. It's an inventive way to make a close fake, but it's not the nearly the same as the original model.
So, I continued to want the original version of the model and I continued to never be given it by anybody. I told them that I know the original model was in a binary format that nobody would understand anymore, with its textures being a whole folder of mip-map textures instead of a single BLP. But on the Hive, as a community, we have parsers for the ancient unreleased Blizzard formats.

So I told Kam while he worked on Reforged that if they ever found this old asset at Blizzard they should send it to me, regardless of file format. I also emailed more recently before rumors said that Team 1 was dissolved at Blizzard or whatever, and I emailed to the Public Relations of the Activision Blizzard, and I asked them:

I wanted to ask if the model art asset still exists for the Owl-riding version of the Priestess of the Moon on Warcraft 3. This model was featured in 2002 footage of Warcraft 3 prior to the game's release but the model was never published. So I was hoping to ask if I could get access to this old model file for Warcraft 3 custom maps.

I have all the old technology I have been keeping, including a parser for the 2002 Warcraft 3 beta BLP images format, as well as a Windows XP Virtual Machine that has Discreet 3ds Max installed with a license from 2004 and with the War3ArtTools plugins. So if this old art asset exists in any format on Earth, I can port it to run on Warcraft III: Reforged to use it in custom game maps with my friends. And I was just wondering if there was any chance of the 3d model art ever being made public. My goal here is to continue to celebrate the legacy of Warcraft III along with Reforged and to continue to enjoy everything the game is and has ever been.

I will include an attachment on this email containing some pictures of the 3D asset that I am referring to.

I know that this request might be impossible to fulfill if these old art files were damaged or lost in the last 18 years there in the Blizzard offices, or if there is not a legal way to share them with custom map developers. But that's also why I was asking. I have no deadline. If you email me back in a month or in six months, that's still cool. I am just someone who enjoys Warcraft III.

Thanks!
Ultimately, on 11/22/2020, the great purpose of the Save Owl Moon Priestess Discord Server was proven to be a lost caused for all time. Planet Earth will never have this 3D model file -- like old books in lost human eras with corrupt leaders doing the book burning, this piece of artwork is lost to the human race. I know this truth because I said to Kam on Discord:

but the training bar never finishes 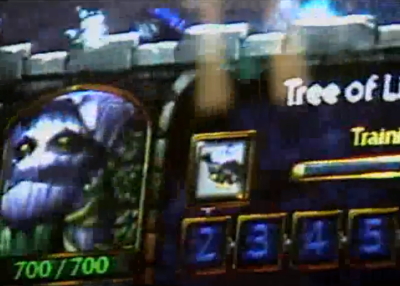 wouldn't it be fun to play this build in multiplayer just to see how different it was? 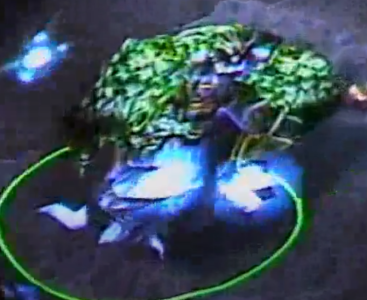 Tree of life with cool blue fire in its hands

I want one xD

And it was at this moment, when the Great @Kam Ghostseer said unto me:

So, in the spirit of Warsmash liberation and freeing myself from the past by creating something new that is meant to be identical to the past, I decided to try to recreate the model as best as I could despite myself being more of a programmer than an artist.

To this end, although I did not use the content from the Garfield model, I performed similar model blending, but I sought to expand upon it in the following ways:

On 11/23/2020, I did a comparison pose between my attempted restoration and a screenshot of the original:

We can tell that the merging point between the rider and the owl is the most shoddy because it is the part for which I have the least restorable information to work off of (being not much of an artist myself).

Some people have a theory that the original model's texture colors would have been different from the color palette that I have available based on the AI-upscaled version of the Sentinel Spell. This might be true. But I have a theory also that the difference may have been the older Reign of Chaos pre-release game's lighting colors.

Below I have a video where I tried to play on my custom recreation Warcraft III modding engine, "Warsmash" where I sought to emulate the lighting colors from the Reign of Chaos Beta, and my theory is that the owl colors actually are not very far from what we see in the old Blizzard screenshots:


After all of these efforts of mine to recreate the original, I became aware that there was another screenshot of the original that I had not previously seen that confirmed for me that my design was missing a flappy sort of cape behind her back, which I came back later on 03/08/2021 to try to add back into the model. 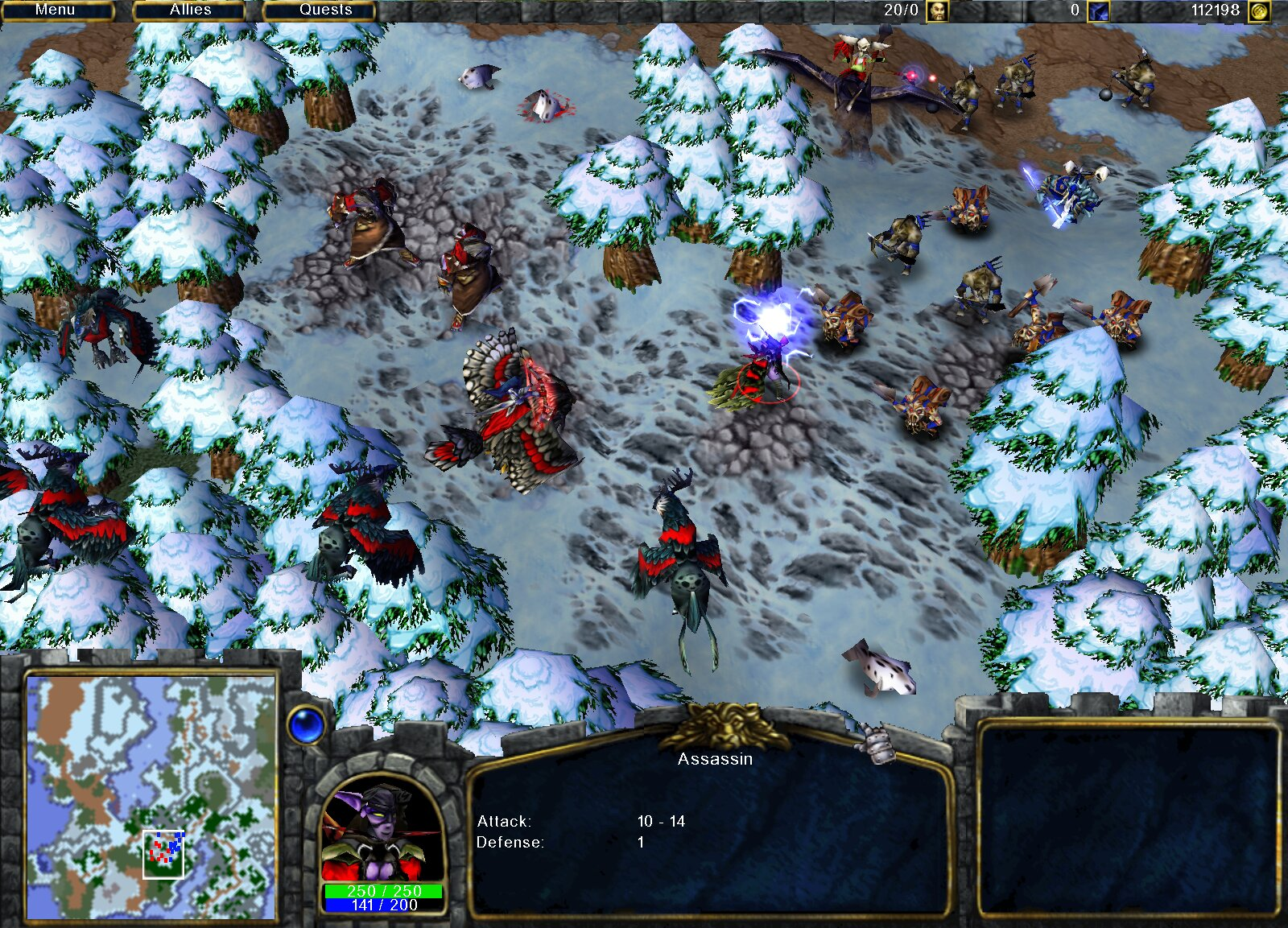 So, the model uploaded here is my current latest version, including the flappy cape on her back, which I attempted to animate by hand rather arbitrarily because I have no way of knowing how the original might have been animated. I can already tell that my reproduction cape does not fully match the original. Feel free to modify this model or continue to seek a closer 1:1 match against the original lost artwork as much as you like.

And, if you are a Blizzard archivist, by the Titans send me the old file to upload as a replacement for this fake fan model here on this site!
Previews 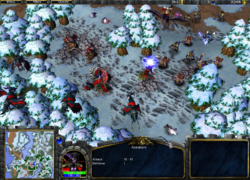 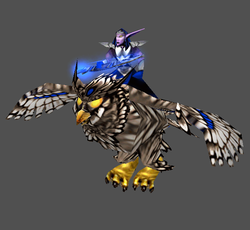 Tools 4 Maps 11 Sounds 1 Tutorials 14
Retera, you have my way of thinking. Making sure that everything Warcraft is archived and not lost to time. Good man.

You have my gratitude man, excellent work! ^^

Models 2 Maps 1 Spells 1
(I could've sworn you already uploaded this to the Hive?...)

Kyrbi0 said:
(I could've sworn you already uploaded this to the Hive?...)

Guess you're thinking about this oldie? HeroMoonPriestess

Maps 2
Retera, do you plan on uploading the old tree of life model? The one in beta or alpha or w/e?

7oda said:
Retera, do you plan on uploading the old tree of life model? The one in beta or alpha or w/e?
Click to expand...

I don't think I have that file, but if I wanted it, I would generate it very quickly and easily by importing the animations onto the release version of the Tree of Life (they are stored in its portrait file).

Edit: I found a screenshot of something I made one time that was inspired by that idea: 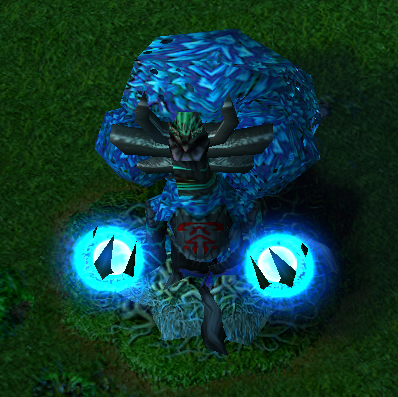 is that worth uploading? was a quick import job in RMS and some fun with a custom texture as I recall...
Last edited: Mar 11, 2021

Models 5 Icons 2 Skins 1
Awesome, looks like a great recreation to me!

Though, the alpha screenshot reminds me:
Did anyone ever try make a flying far seer from the alpha as well?
I remember seeing a PotM attempt before, but not a far seer one.

handclaw said:
Though, the alpha screenshot reminds me:
Did anyone ever try make a flying far seer from the alpha as well?
I remember seeing a PotM attempt before, but not a far seer one.
Click to expand...

Oh no Handclaw what have you done

handclaw said:
Awesome, looks like a great recreation to me!

Though, the alpha screenshot reminds me:
Did anyone ever try make a flying far seer from the alpha as well?
I remember seeing a PotM attempt before, but not a far seer one.
Click to expand...

Ujimasa made one a long time ago, combining the farseer and the wyvern animations, but he updated it to use only the regular wind rider animations :c.

Maps 1
Can you add some small hero glow please

Maps 1 Sounds 7
any chance we'll see a dissipate animation at some point? :>
You must log in or register to reply here.

Priestess of the Moon

Priestess of the Moon - On Foot