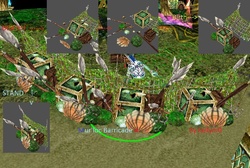 An Idea that flashed into my mind in 3 seconds, it took over a month and a half to complete

I had the idea of ''mur'loc Fortifications'' to surround mur'loc towns but had little to go by for ideas, humans have stone, orcs wood, goblins have sand bags, so I decided to make it a collection of junk you find in a lot of blizzard melee maps that take place in sunken ruins, a random pile of shells stones spears and nets propped up on the traditional mur'loc melee weapon, the shell blade, attached to a stick, to make a primitive yet menacing spear. capable of harming large beasts when they crush them under foot.

the animations included are:
Birth ---- the spears stab down from above, the rocks wooden crate and stone block are unburied from the ground with dust effects, various shells and star fish fall from the sky and cover stuff, the nets covered in sea weed rise into position propped up on the spears.
stand ---- the barricade stands majestically as the fishing hook dangles in the wind
Death ---- the barricade falls apart and sinks into the ground
decay --- the model instantly vanishes

the barricade can be killed, so its a doodad destructible basically, but can also be born, can stand and has collision spheres/proper extants so it can be used as a basic ward, but don't use the barricade doodad as your base doodad, its awful and is so buggy, I suggest making it a ward dummy. it works great with 2x2 pathing. take a farm, set the pathing you need, and then un check ''is a building'' to be false, the building can be turned and everything, but retains its pathing.

give credits as a mur'loc named kellym0 the god of murlocs and what not. oh, and other variations B-C-D and E will have to wait a while as im busy on other projects, so if you want to make you're own variations, feel free to do so, you may have issues animating them, so if you make good versions and give them to me I may animate and upload them as extra variations for every body with you're additional credits. other wise how ever I'll il just upload my other 4 templates in the future.