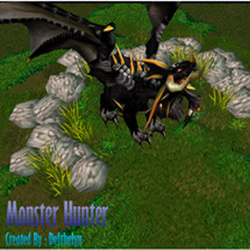 In this single player game, you're become a Monster Hunter, do quests, create items and equipments from what you hunts and become one of the legendary Monster Hunter !!!

Created by :
Myself T_T so sad, i need members to help me !

Features :
- Save and Load system, i'm not using the default wc3 saving system because it will be fatal error when trying to load a saved game
- Quests, Lot of quest you can take, but at this time, there's only first ranked missions that you can take
- Killcount, after you kills 5 same or higher ranked monster than you, you will gain 5 attribute points and 1 skill points
- Lot of skills you can learn
- Crafting, create your equipment from what you hunts !, always take items from killed monsters, and maybe sometimes you need it
- Mining, You can mine at mining spot in order to gain resources that very useful for crafting
- Combining, You can combine 2 items into a greater one !, but at this time, there's only 4 items that you can combine
- Attachment System (yeah sure !)
- Skinning, a killed monster does not drop items by itself, you must use Pick Up Items skill to pick it up

Credits:
Well, i lost my track of the imported models's author, so, if i used your resource, PM me.
But many of models i've downloaded it from HiveWorkshop and Wc3c

Lists of Skills:
There is no passive skills, so you must use it manually in order to gain it's effect

Screenshots ? Well, maybe in the next update