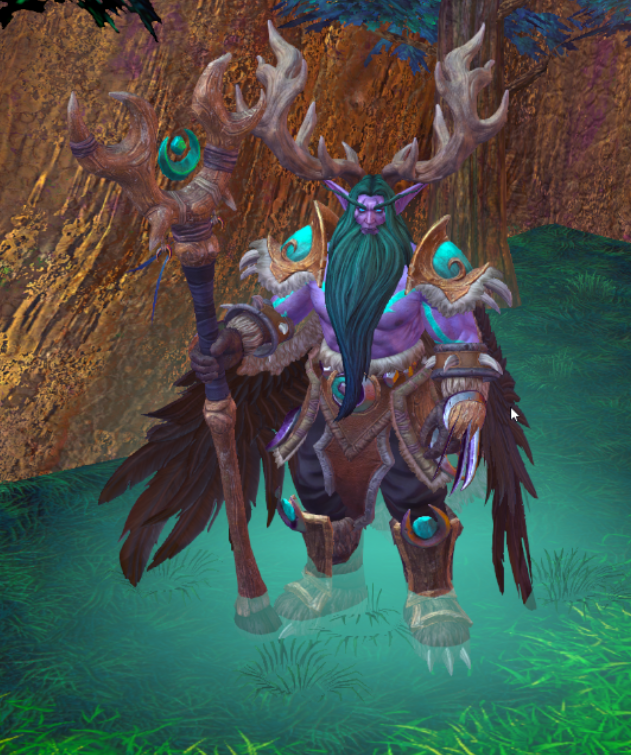 This bundle is marked as approved. It works and satisfies the submission rules.
View usage Statistics
Reactions: Flinn, deepstrasz, Moonman and 3 others
This is a custom model made to look like Malfurion from Reforged, but without the Stag, since Blizzard developers were lazy and did not make this version to go along with the Reforged client to keep support for any custom maps that needed a Furion hero who was dismounted.

I tried to keep it thematically similar to the original Malfurion Reforged, and I simply imported Druid of the Talon animations but removed the Bird.

Mr Ogre man
Since this is really useful, it is marked as approved. Heroes should have a dissipate animation, though, so please update the model whenever you are able to.
Read full review...

Maps 1
Modders stepping up where blizzard is failing. As expected

lord_Turin said:
Modders stepping up where blizzard is failing. As expected
Click to expand...

Just not playing a game because blizzard did shit is stupid. I think we deliver Blizzard a message, if they do nothing with their are stupid, but the salt tempest is not a way to continue. Personnaly i just want Blizzard to wake up and reverse/upgrade what they did. I have not a big hope but anyways...

Also Retera is mainly giving some commissions to help people, so treat him better he deserve more than some indirect critics.

Maps 1
The fun part is they DID make an unmounted model of Furion, but didn't put it into the game.

the attack 1 and 2 are the same animations
but this is epic!

Maps 3 Reforged HD Models 17 Reforged HD Skins 20 Reforged HD Icons 6 Tutorials 1
It's Malfurion day Apparently, but how did you make the model? it looks as perfect as the original...

P.S. Do you think the model would work with my skin?

Models 49 Skins 1 Tools 6 Maps 9 Templates 1 Reforged HD Models 18
Yes, this was made by copying the original Reforged model. It was made in Retera Model Studio Reforged Hack version. I did File->Import and selected the Druid of the Talon.

Edit: As a note, the bundle has now been updated. I had uploaded it with the Stag-rider furion's portrait since you can only see his face, and I figured it did not matter.
Someone pointed out to me that the game files actually include a portrait model for the furion with no stag model, even though there is no standard model for it. This has now been fixed, as you can see, so that my bundle is entirely without the stag (even in the portrait).
Last edited: Feb 15, 2020

So good. have a plan do tyrande unmounted?

Icons 3 Maps 3
Just commenting so i can put 5 stars.

Any chance for the Dissipate animation?

nice model, thank you for this

id be glad to see some model backporting to pre reforged, some models are still great.

thanks for posting that, and didn't had the idea yet of how bad it is by now

At 1st would completely vote on porting the animations from the original models into the reforged ones, but looking at some custom high poly models using it like Rebirth and even some older from the sons of azeroth, i would wait until its possible to backport without any warping issues, im even having problems exporting the models and trying to convert to other formats with the textures in it.

Thanks for your work <3

Anyway to get just the Stag model itself? Been trying to source models for a Reforged: War of the Ancients map.

brother I need your help, when I import the models and replace the chains, I get nothing black shadows, which version should I use I have 1.26, it happens to me with each reformed model of the forum :c

Zaxlou said:
brother I need your help, when I import the models and replace the chains, I get nothing black shadows, which version should I use I have 1.26, it happens to me with each reformed model of the forum :c
Click to expand...

johnwar said:
It is because it's for Warcraft III Reforged the only way you can use that is buy the reforged
Click to expand...

Oh thanks for the answer, I thought it really works in the original wc3, I fool putting in incompatible models xdd

Zaxlou said:
Oh thanks for the answer, I thought it really works in the original wc3, I fool putting in incompatible models xdd
Click to expand...

Same happened to me in this same model. I tried to import it too.

Models 2 Icons 2 Packs 1 Skins 2 Maps 9 Reforged HD Models 3 Reforged HD Skins 2
It really does need dissipate animations if its to be used as a hero model.

Do you think you could somehow manage to create a Tyrande off of her Nigthsaber, or even possibly try to datamine and create a model for Daughter of the Sea Jaina off of the horse?

Models 49 Skins 1 Tools 6 Maps 9 Templates 1 Reforged HD Models 18
yes we can do that and then we can make them dance to carameldansen like in this video:

How does animation porting work in Reforged? I'm just wondering if you couldn't just slap Jaina's, or some other unmounted staff wielding hero model's, death/dissipate animations onto Malfurion here.

Models 49 Skins 1 Tools 6 Maps 9 Templates 1 Reforged HD Models 18
Yeah you could the animations are basically stored the same way, and how the character binds onto that data is just stored in a more complex way. So you can literally use the same transfer tools.

Models 2 Reforged HD Models 22 Reforged HD Skins 2
Since this is really useful, it is marked as approved. Heroes should have a dissipate animation, though, so please update the model whenever you are able to.

the model doesnt have a sound?

Models 49 Skins 1 Tools 6 Maps 9 Templates 1 Reforged HD Models 18
If you are having problems where a FAFX soundset will not play for a non-FAFX model unit, from my standpoint I see that as a game engine configuration problem more than a 3D model problem, and you could maybe ask for help in a new topic regarding how to configure a non-FAFX model on a unit to use a FAFX-based soundset.

Off the top of my head I don't remember if the portrait I uploaded for this model has a FAFX chunk (more on that here) but if the model portrait does not have the FAFX chunk you need, then my suggestion would be to just use the default MalFurion portrait file with this model.

that is malfurion, but the version of the kingdom of chaos would be missing, that is, furion is missing

johnwar said:
Same happened to me in this same model. I tried to import it too.

fran bel said:
that is malfurion, but the version of the kingdom of chaos would be missing, that is, furion is missing
Click to expand...

I had to make an account, because I cant seem to import any models. I'm doing exactly what it says in How to, even tho its a little different on a pc, but I cant seem to find the model in editor? Any help.
You must log in or register to reply here.