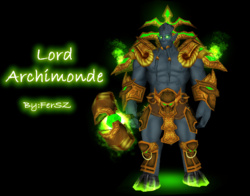 I present to you...
One of the greatest leaders of the legion...
Lord Archimonde! (silent and respectful reverence)

I tried to resemble this as much as I could to the design of the original WoW model, So I hope you find it usefull, Enjoy It!

Update 1:
- Fixed a little problem with a vertex on the left bracer

Archian
Thank you for making this ♥ Although, you made my ass look dreadful. Nawh! Seriously though, excellent model and a very useful one. I dont recall any other Archimonde models that matches this high level of quality. Very nice "wrap job" and tinting...
Read full review...
Reputation Statistics
Page 1 of 3
Show Ignored Content
Page 1 of 3