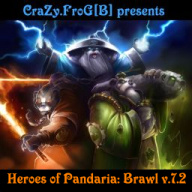 It has been a loooong time.

Visit and register at the official HoP forums: http://www.z4.invisionfree.com/hop for change logs and updates.

If you fall across any bugs, please report it at the Bug Reports section.

Moderator
16:33, 14th June 2009, by Rui: An original map, interesting to explore, yet with (grave) flaws on balance. Read my full review and antecedent comments for more detail. Set to Reviewed status with a 3,5 rating.
Read full review...
Reputation Statistics
Page 4 of 8
Show Ignored Content
Page 4 of 8