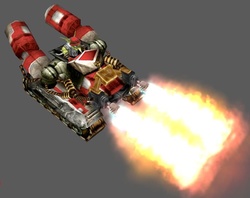 This goblin contraption has recently been deployed in my goblin arsenal.
Worked my ass off making this. Apologies for the huge size.

It's intended to fit with the Tinkers Alternate anims because I'm using those alternate anims as a tank in my glorious map. Edited again, bam, now you got a link to the awesome map as well. http://www.hiveworkshop.com/forums/map-development-202/goblin-dominator-squad-2-0-a-229228/

Also, while I'm at it, anyone wanna help me with my map? Terrain wise or possibly icons? Or just concepts? Ideas? I'd love to hear them all.

Edit:
Realized that the tinker texture had the unshaded box ticked down, fixed that.
Now the copper should not glow in the dark anymore.

Edit x2:
I didn't notice the shining guns, now nothing glows in the dark.

Edit x3:
After Kellym0 pointed out that the flame tank should have a purifying flame upgrade, it now does. The alternate attack animation now attacks with blue fire. Enjoy.

Edit x5:
Misha suggested me to add the IronGolemDeath sound effect to the death anim.
It sounded like a good idea, so I did.