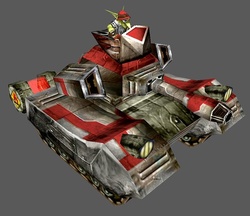 The tank's manual:
"The heavy, medium-sized battle tank of the Goblins can easily take out weak units in one blow. Also, a heavy plating of a custom made alloy has been assigned to the tank design to insure the best protection against melee, ranged and magic. Two tanks with a multi-purpose fuel has been fitted to the end each thread. Additionally, the tank's turret can be upgraded with two rocket pods afterwards to make it also deadly against air units."

Null made a wonderful screenshot icon for it.

Don't distribute to other sites. Give credits if you use it in your map or campaign. Thanks.
Special thanks to frostwhisper for extensive testing and for making a propaganda picture for it.

Moderator
11:22, 15th Jun 2008 Pyritie: The mesh and everything looks great. The unwrap on the sides looks a little stretched, and you have TONS of bones, making +200KB for a model with no custom textures quite gigantic. Plus, do you really need all of those...
Read full review...
Reputation Statistics
Page 2 of 3
Show Ignored Content
Page 2 of 3