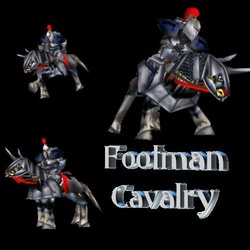 Hello all! I've back from a while away bearing a new model!

This model is based off of my Alliance Cavalry model. I've used player feedback to alter it into a replacement for the human knight as requested by several users. I've managed to bring back some things that previously had to be removed because of the poly count size (notice the plume

) and added armour to the crummy-looking horse.

You'll notice that it has no weapon. I decided to leave it this way so that people could add their own weapons via the "hand, left" attachment.

Let me know if you find any problems with it.

[Update]: I've fixed the dissipate animation issue. His chest will no longer disappear during the animation.

[Update #2]: The model was crashing games, because of a mistake I made with the Geoset Animations. It seems to be working fine now and I gave it Decay Flesh and Bone animations instead of Dissipate.

[Update #3]: Improved the wrap around the horse's head, back legs, and tail. Tried to make his legs look a little better. Added a stomach to him, and made his plume team-coloured. Removed the spikes and canged the horse's helmet's horns.

[Final Update]: The horse's head is no longer hollow.

Moderator
19:58, 20th Jun 2009 Pyritie: Unwrap is kinda messy in places, such as on the tail or helmet. Also, why is the horse hollow? You could also shave off some polies on those spikes on its back. Also, why are the back of its legs black? You should also...
Read full review...
Reputation Statistics
Page 1 of 4
Show Ignored Content
Page 1 of 4