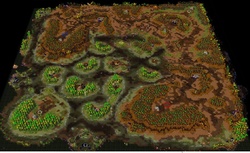 It features a tileset which is half barrens, half sunken ruins. The layout of the starting positions is somewhat unusual and difficult to attack, but given the large resources available on the map, camping in your base is not a longterm option.


Over the years, I've been occasionally making some melee maps, partly as an expression of my frustration of the competitive wc3 mappol being virtually unchanged for ages. This one is a relatively recent project. Hope you guys like it, and hopefully this post is following the guidelines, as this is my first map uploaded here. If interested, I might upload some of my other maps.
Previews

deepstrasz
I think the Makrura camp should not have such a short camping range as they can just stand and look at the player's units without engaging them even though normal (nonneutral) units would engage at that range (below 600). Might be because they cast...
Read full review...
Reputation Statistics
Show Ignored Content