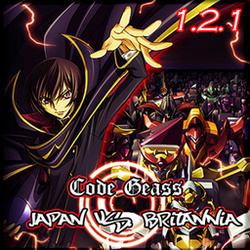 The last battle of the Order of the Black Knights against Britannia has arrived. In this epic battle, it will be decided who keeps Japan, the young and powerful army of Zero or the numerous and skilled army of Britannia.

This is an Arena map based on the anime Code Geass. In this map, you choose a pilot. With this pilot you get on a "Knightmare Frame" (Giant robot) and you go to an arena. In this arena you will find some creeps owned by both teams and the other enemies.

Every pilot has 2 skills. One of this skills is transmitted to the Knightmare Frame once the pilot is inside it. Those 2 skills are different for every character, though there are some characters who have 1 skill that is mostly the same.
The knightmare frame has 6 skills most of them, and two special type of knightmare frame has 7. One of this skills is the one of the pilot. Other five are, hold, that lets you hold an enemy for 3 seconds, throw spike, which deals some damage to the targeted unit, fly, which allows flying mode to the knightmare frame, though this flying mode makes the knightmare frame lose 2 fuel (mana) per second. This fuel (mana) can be regenerated by going near a refuel station.They also have turbo, which makes them move faster and the two special type have a Hadron Cannon, which deals massive damage on a line.

There are also shops in which you can buy items. There is two types of shops, one of them is a permanent item shop, though you lose all your items once the kinghtmare dies (he drops them, so you can take it again with your pilot) and the other one is for items with charges such as missiles or the fleia.

There is also a Knightmare frame factory, in which you can buy creeps such as soldiers, tanks and helicopters and increase your knightmare's stats, like HP, attack and defense.

The game ends when one of the team loses all his Knightmare Frames.

There is also a simple AI system which will only work on those computer whose controller is a computer, not nothing or closed. This AI can choose a pilot, choose a knightmare frame and fight in the arena.