Rexxar returns to save the land of Durotar once again in a brand new Warcraft III custom campaign! (Created by me, Med. MapGuy, check out my other stuff!) Set several years after the cataclysmic events in Theramore, Rexxar teams up with faces old and new to confront an evil beyond reckoning!

Creation of this custom campaign began after I stumbled upon the defunct World of Warcraft RPG on Moddb and began thinking, what if someone used these forgotten assets for something else? I then saw a thread about how nobody has developed a continuation of Rexxar's story, and after reading his very brief appearance in the World of Warcraft tie-in novel, Cycle of Hatred I decided it was time.

The campaign features the following:


Developed using patch 1.27b (Not compatible with Reforged, sorry), this is a classic custom campaign with gameplay in the vein of the original Founding of Durotar, but without the complicated save / load level transition function. I retained the look and feel of classic Warcraft III, and utilized Johnwar's excellent suite of Orc, Ogre and Troll models, with some even being developed exclusively for this campaign! Retera, Asssssvi, Rhapsodie fantastic models are also featured! 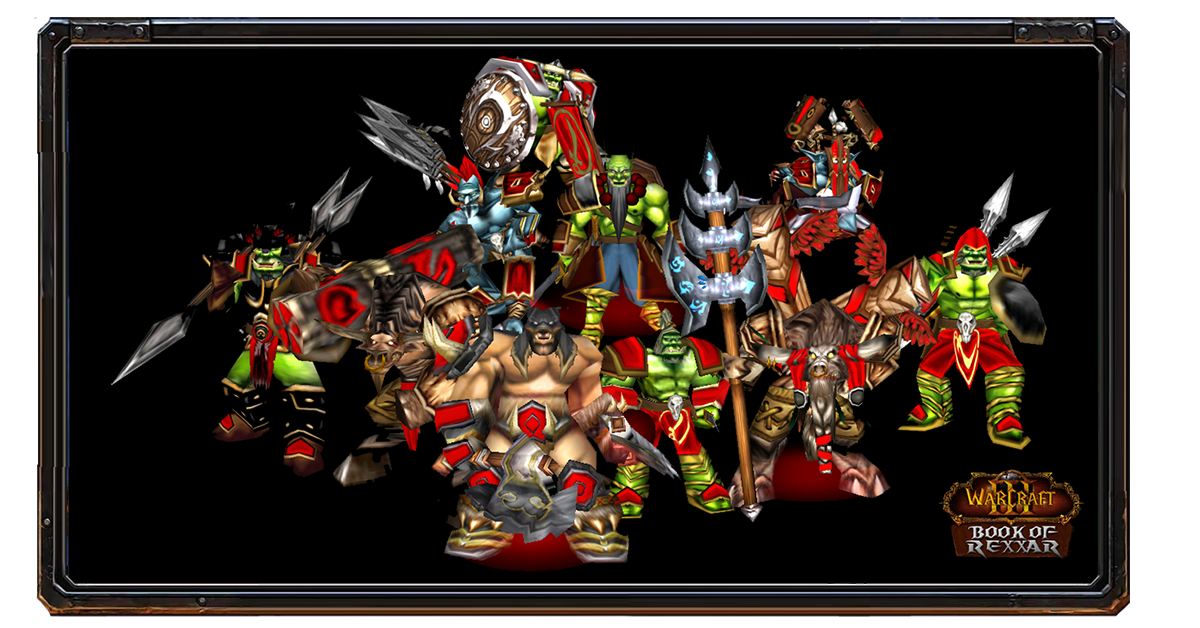 Here are some gameplay screenshots! Note that this is a standard custom campaign and does not use the save/load open world mechanic found in the original Founding of Durotar as I couldn't figure out how to make it work.

As mentioned earlier, several of the levels are heavily modified versions of unfinished maps found in World of Warcraft RPG. Custom tilesets were taken from the Warcraft III: Rebirth project. Here are some comparison screenshots of the original WoW RPG maps and my Book of Rexxar versions. 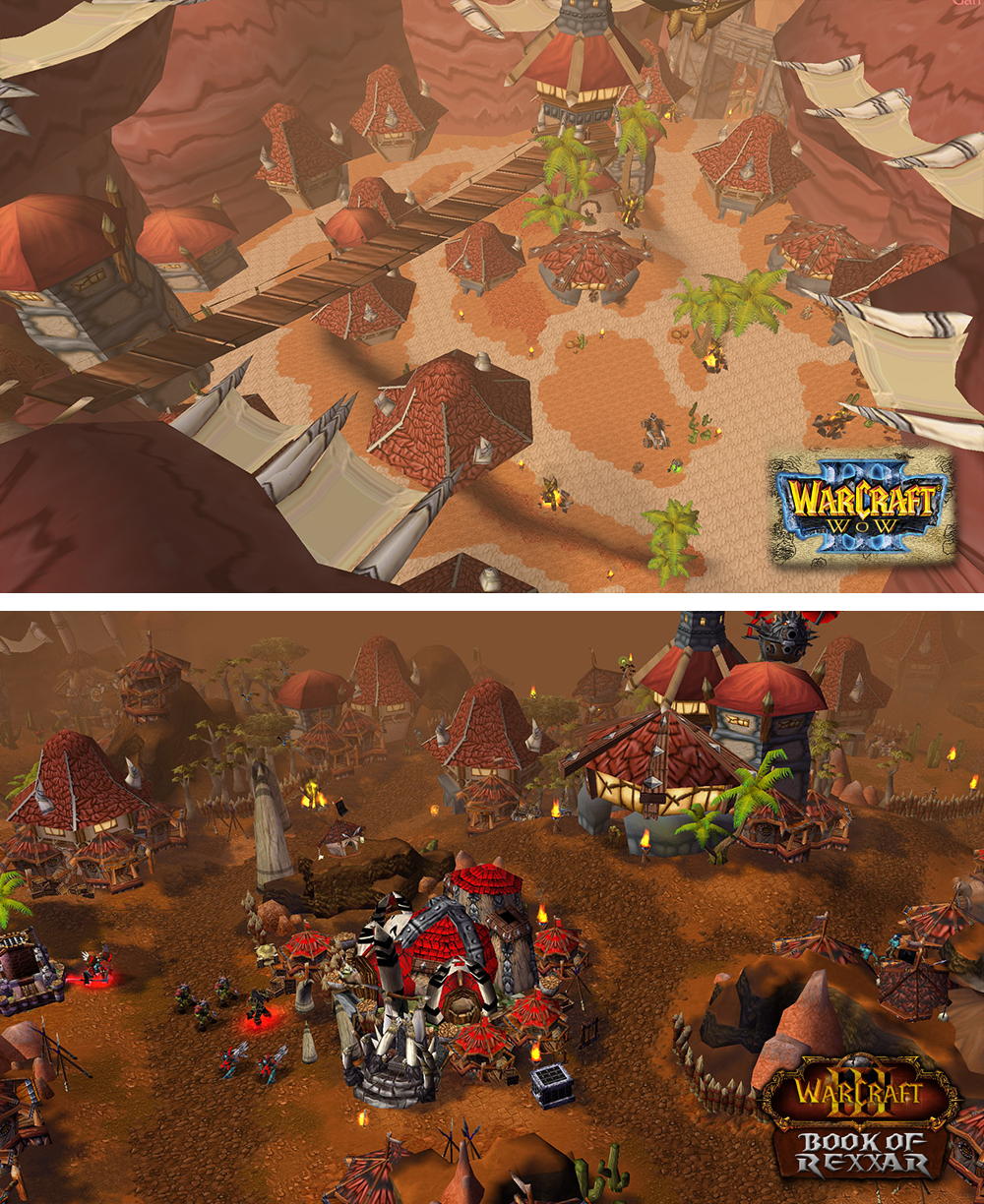 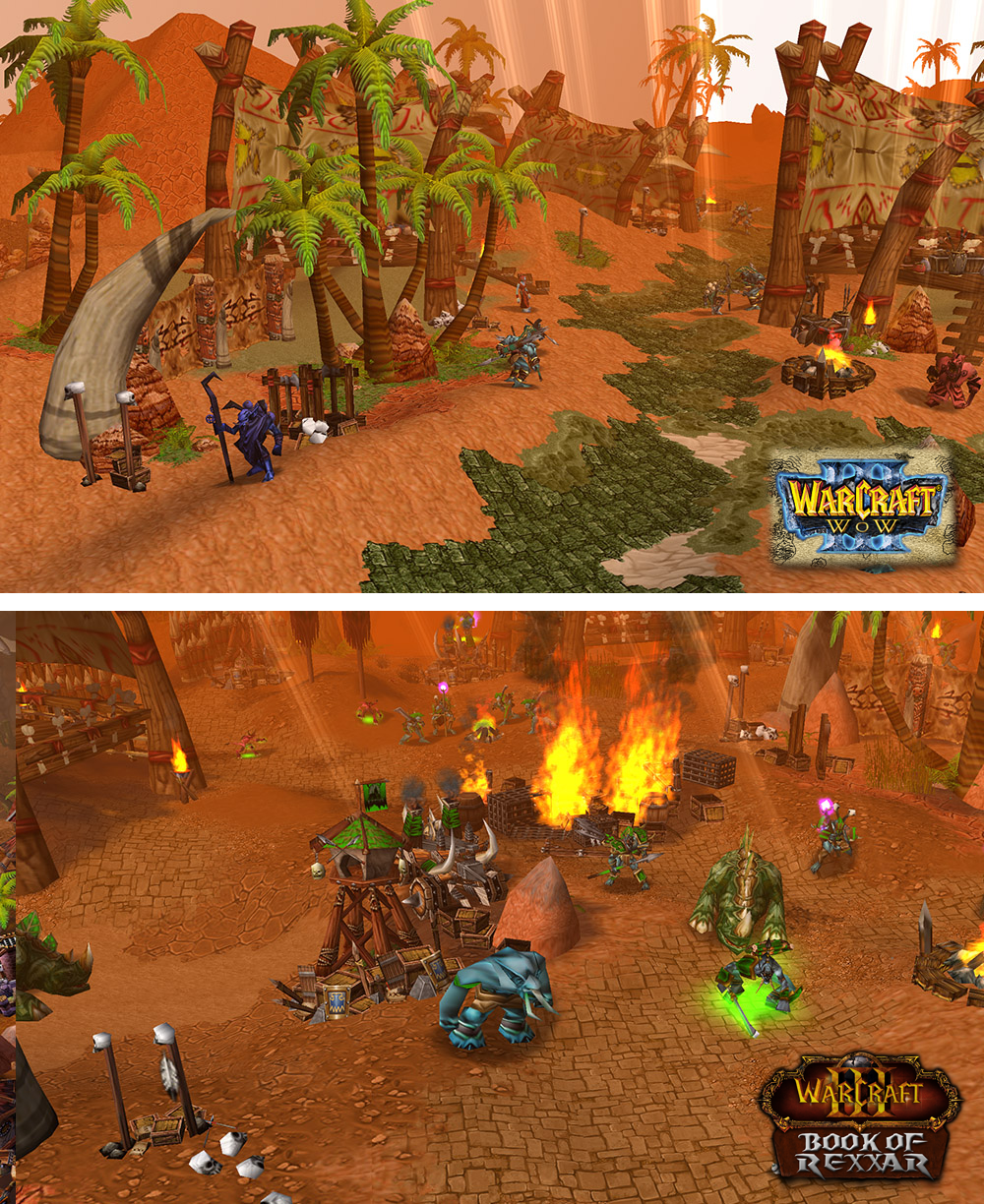 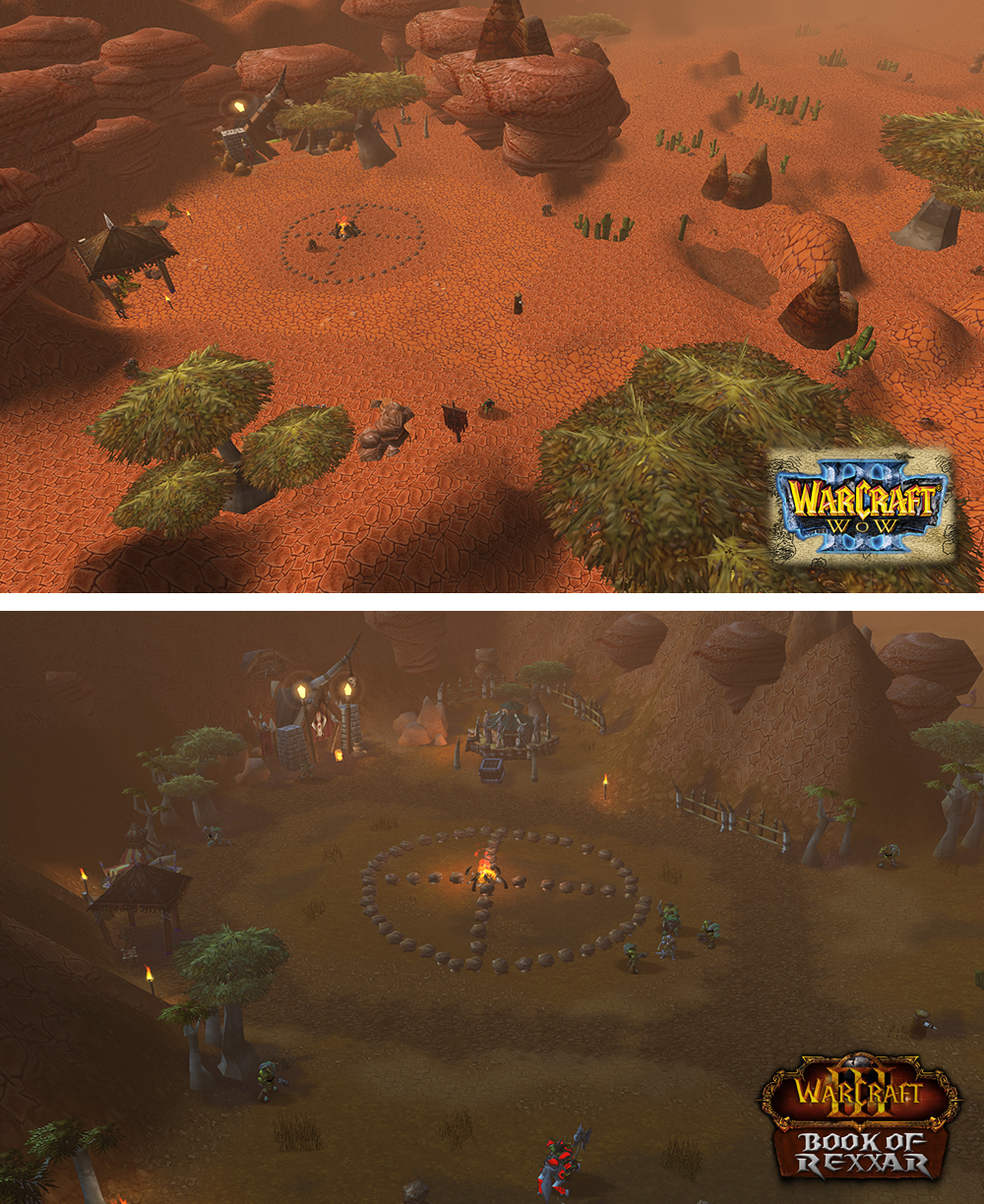 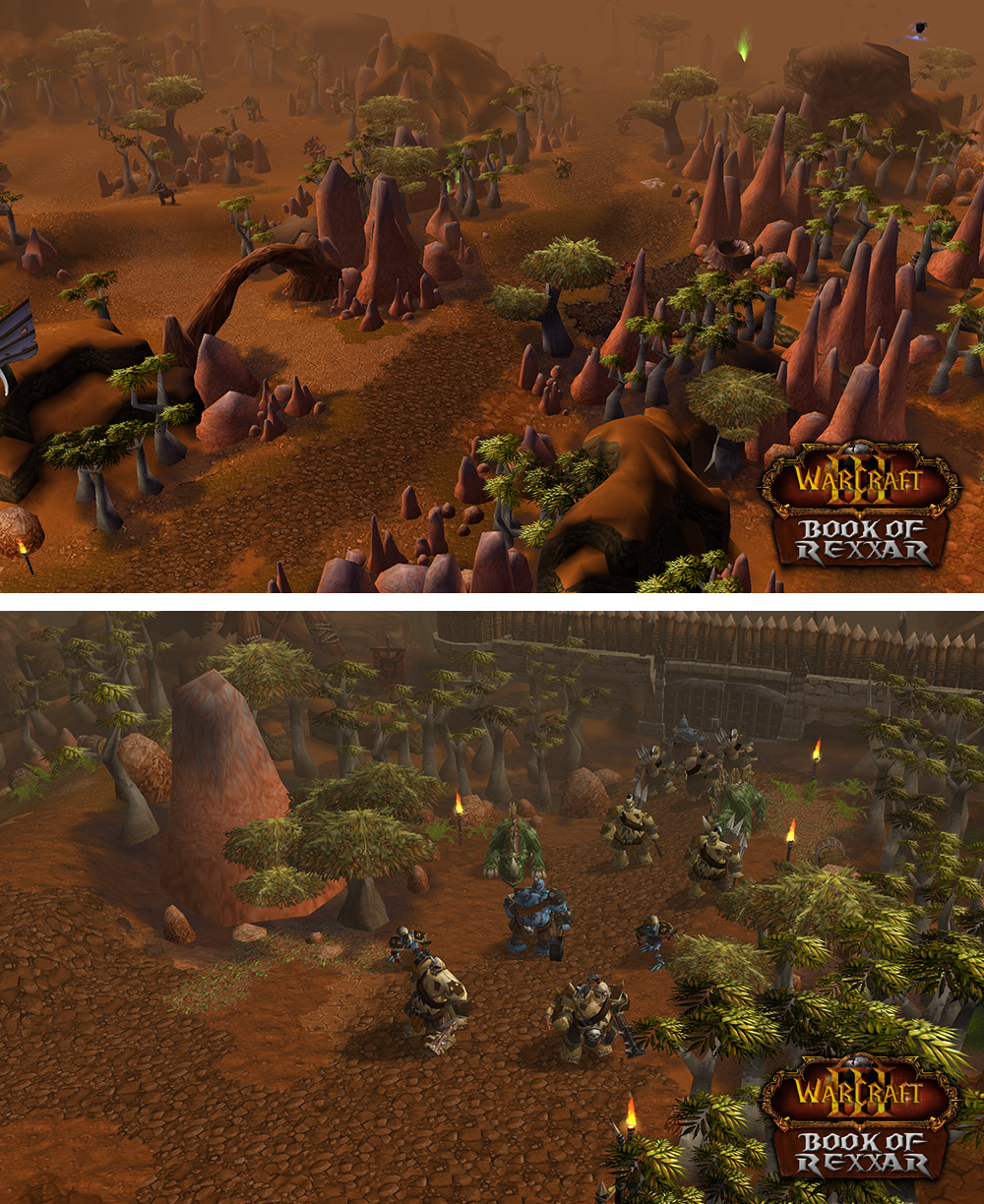 Well-known quests from World of Warcraft were weaved into the plot to lend an air of authenticity. As an example, the Burning Blade coven at the Valley of Trials and the Darkspear Tribe's exile from the Echo Isles became central elements to the story.

This campaign is one of my most extensively playtested works thus far. It's not going to be perfect, but I've done my best to offer a relatively smooth playing experience. Special thanks goes to waredcraft for his early contributions. Big thanks goes to Lazarator and of course, johnwar for their excellent feedback. You guys really helped make this campaign better!

Maps 3 Tutorials 1
Hell yeah! I could Found Durotar with Rexxar all day long, this sounds amazeballs.

Models 3 Maps 1
Looks very promising. Too bad it won't use the sub-maps mechanic, but that's a lesser issue.

What will the level cap be? Is it mostly RPG with some base-building or all-RPG? 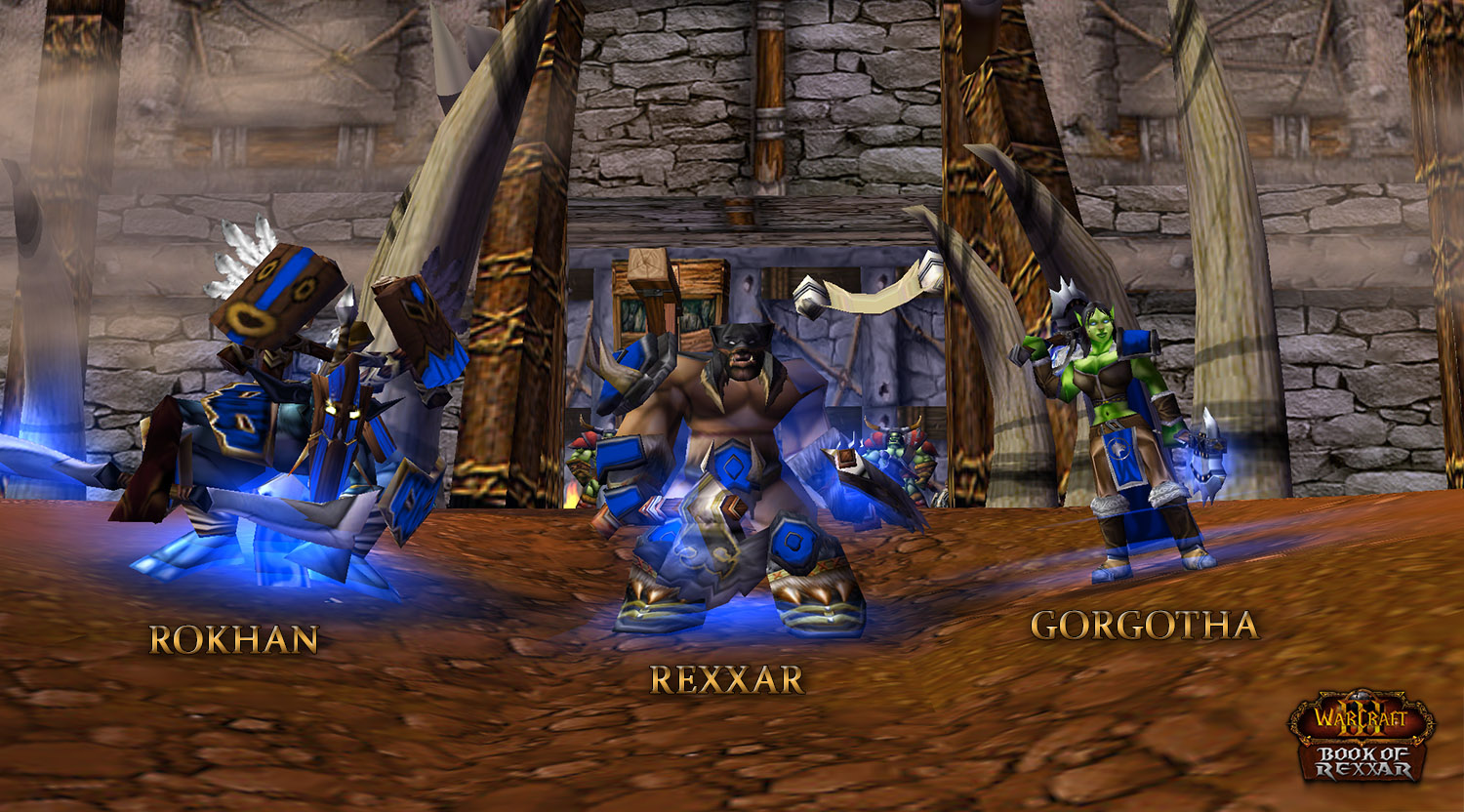 Just to elaborate on the main lineup for this campaign, it'll be Rexxar, Rokhan and a warrior named Gorgotha. I couldn't figure out a way to have Chen appear at this point in the timeline, and I thought it'd be nice to have someone new in the party. There will be a few new custom spells aside from the regular ones to mix things up a bit.

By the end, the level cap will be below 20. The levels are purely RPG/Micro-mission, no base-building.

Maps 1
As someone that really love the horde until blizzard destroyed it I looking forward with this!
Good luck @Med. MapGuy !

I Love campaigns which story based on wow's story or novel cause it let me feel familiar and excited. Looking forward to your new work coming soon!

Maps 10
When researching for this project, I learned in the official lore that Rexxar traveled to Draenor to meet his old man. I considered having this as my starting point, but decided that creating a campaign leading into these events (for a sequel perhaps?) would be much more satisfying. So I dug into what little lore could be found on Rexxar. Nobbel87, novels, what have you. The conflict soon became centered around the lingering presence of the Burning Legion after the Third War, crazy cultists, and delusional faction leaders. 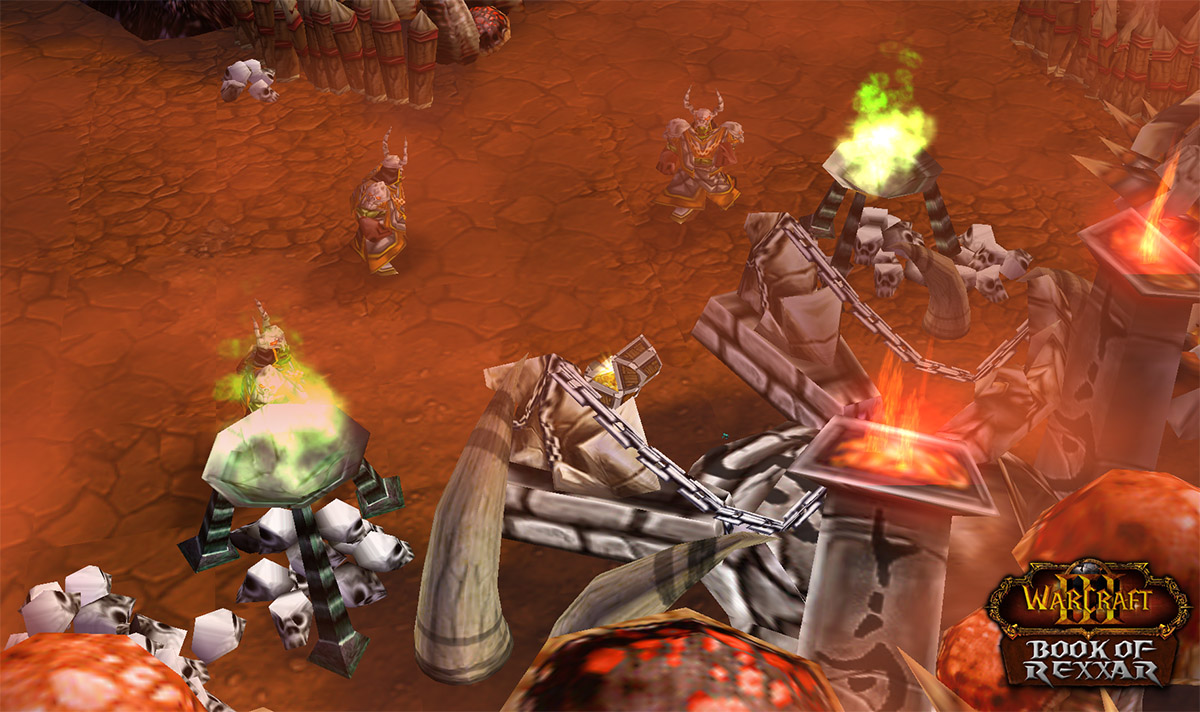 Once I was able to piece together a cohesive narrative, I then thought of what "art style" to go with for this project. Do I go with Ported WoW Models, or Classic? After a few tests on the World Editor, I decided to go with the classic. 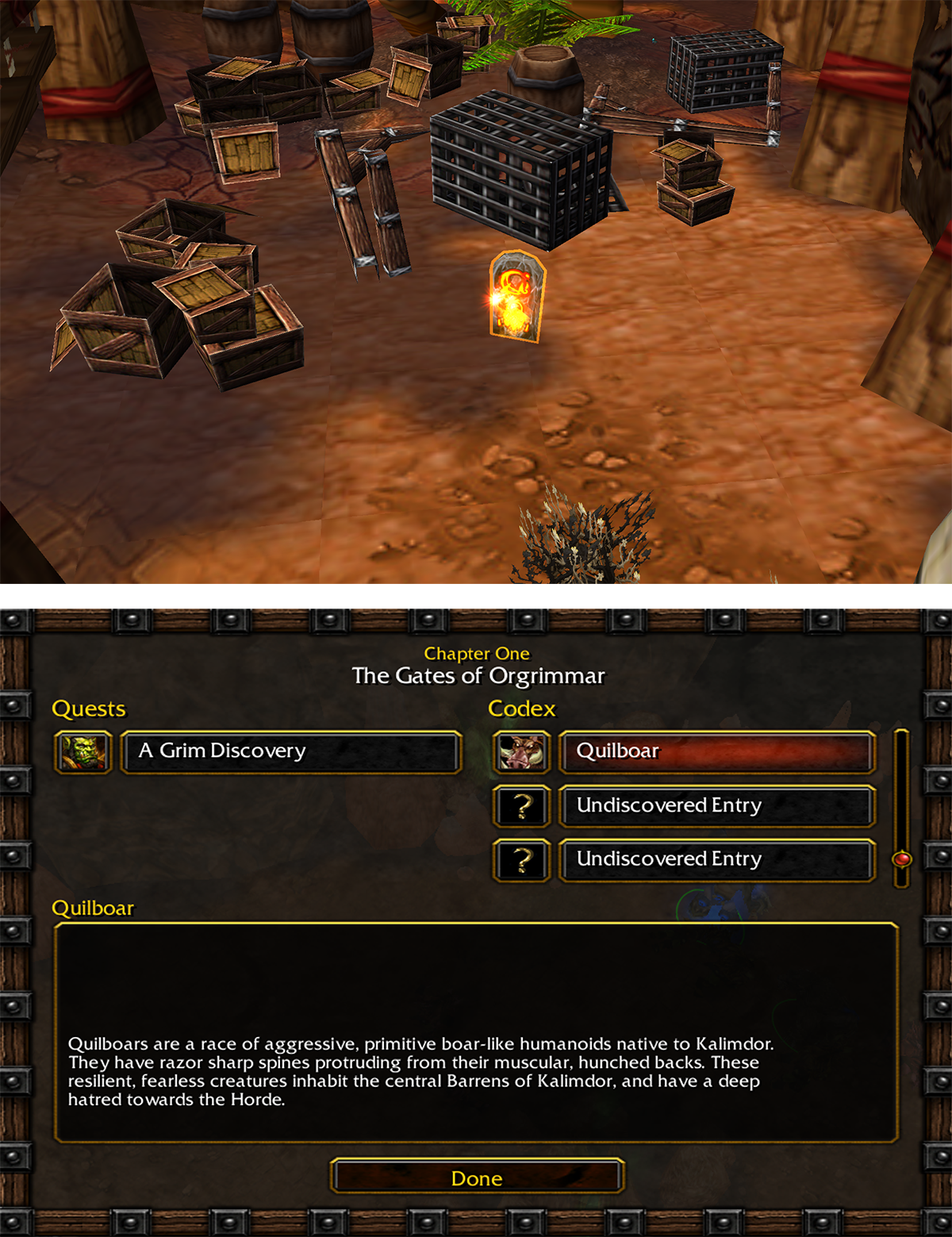 One minor feature making its debut is the Codex, which is an idea I borrowed from InsaneMonster's Re-Reforged project. This is great in helping flesh out the wider Warcraft universe, and adds a bit more flavor to the gameplay proceedings. Expect this to appear in future custom campaign projects!

Hey just want to ask if anychance you can made this Troll Hero will shown up AS OLDFRIEND to Rokhan and accompanied Rexxar too in their new journey ? Well if you are okay with it 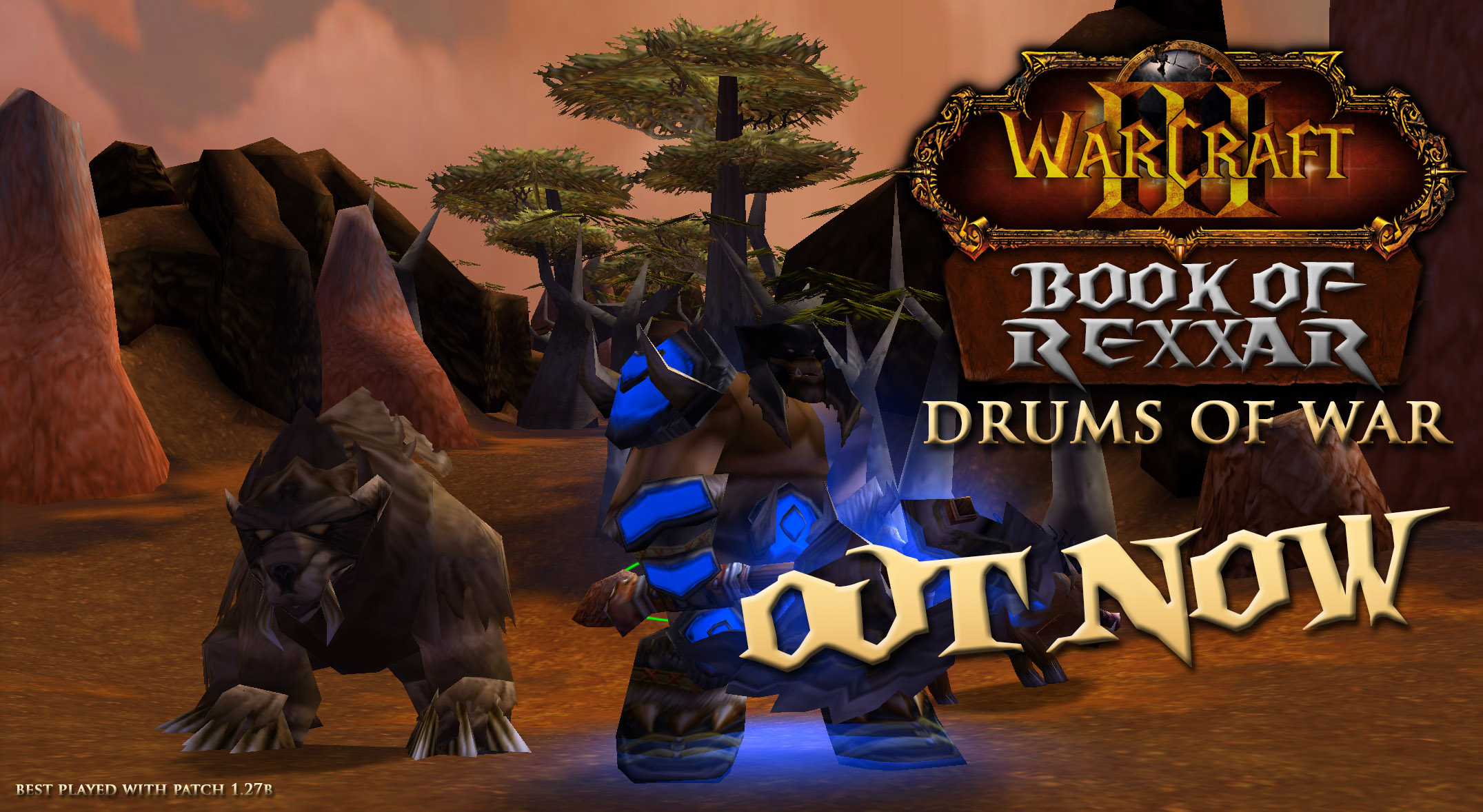 Let the hunt begin! Book of Rexxar - Drums of War is out now! Download it here!
By fang and claw! That's 9 playable single-player chapters that continue the story of Rexxar!
Unleash the beast! What a deal!

"This is why I prefer the company of beasts!"
- Rexxar

In this latest chapter, Rexxar faces against demons from the past, ready to strike at the heart of Durotar!
By his side are Misha the bear and Huffer the pig, old friends who will stick with him to the end!
By the way, Re uben, I like your suggestion... Maybe in the future?

[Miscellanous / Other] Warcraft III: All In One

Warcraft II: The Drums of War
2

Plz help i really want to but i dunno how!