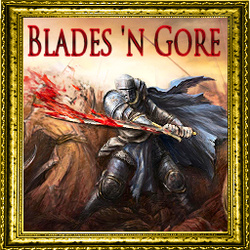 
Blades ‘n Gore is a sword fighting game that is currently in Beta stage. This means that the game might still contain bugs.

Combat System
Instead of automatic attacking, you must aim your hits.
The players have 4 abilities so far:

All abilities cost energy (mana) and when you run out of energy, you must wait a few seconds for it to regenerate.

Also, all abilities can be interrupted. Interrupting is done when two players perform Attack, Dash or Slam at each other at the same time. This results in both attacks being cancelled and both units being knocked back a bit.

Gore System
The map features a gore system. Whenever you manage to hit someone, blood will spill. Also, when a unit is low on hp you can see him bleeding. Try having a 12 player deathmatch on a small arena and it’ll get quite bloody…


THIS MAP IS OPEN SOURCE
- Feel free to learn from, edit and improve it!