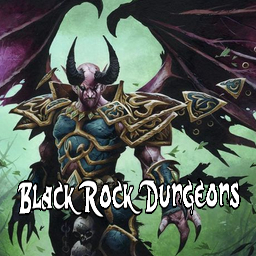 This bundle is marked as approved. It works and satisfies the submission rules.
View usage Statistics
Reactions: deepstrasz, JesusHipster, Rufus and 2 others

When you load into the game you get to pick 2 heroes.
The goal of the game is to gather loot, level up, kill bosses.
The map has a total of 17 bosses but some of them are optional.
I have been working on this map on and of for about a year and
it is finally starting to look like it is finished but it might not be
very well balanced between the classes so if any of you would like
to playtest it and give me feedback i would be grateful!

There are a lot of hidden secrets around the map so if you enjoy that
kind of thing this is a map for you! 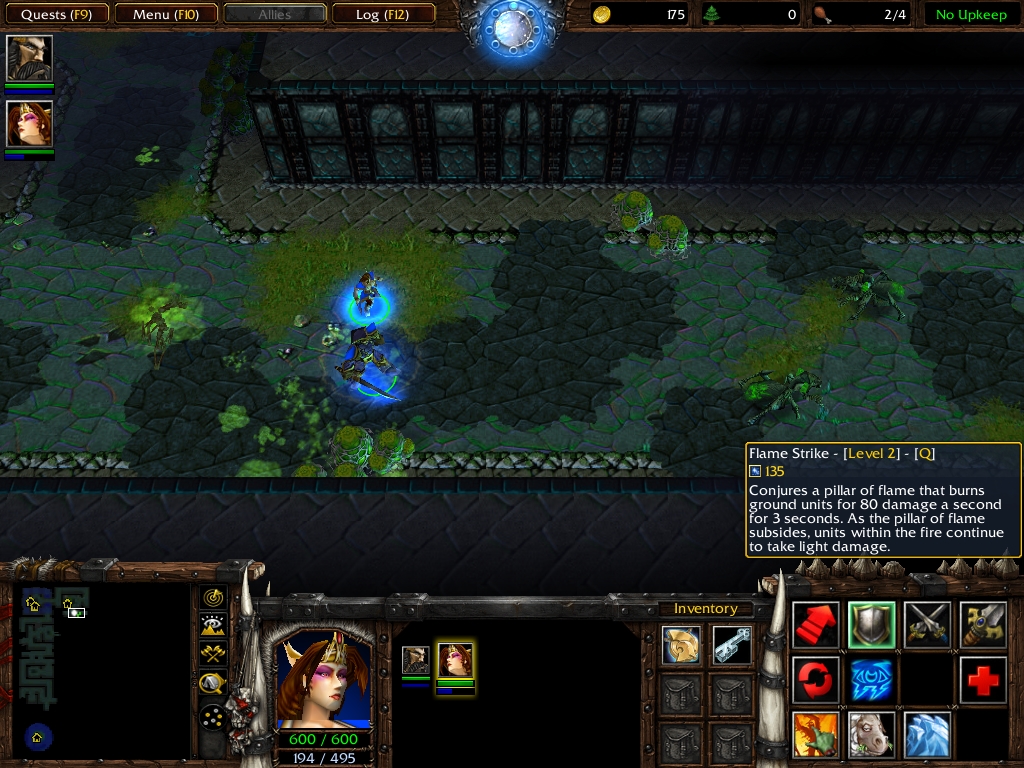 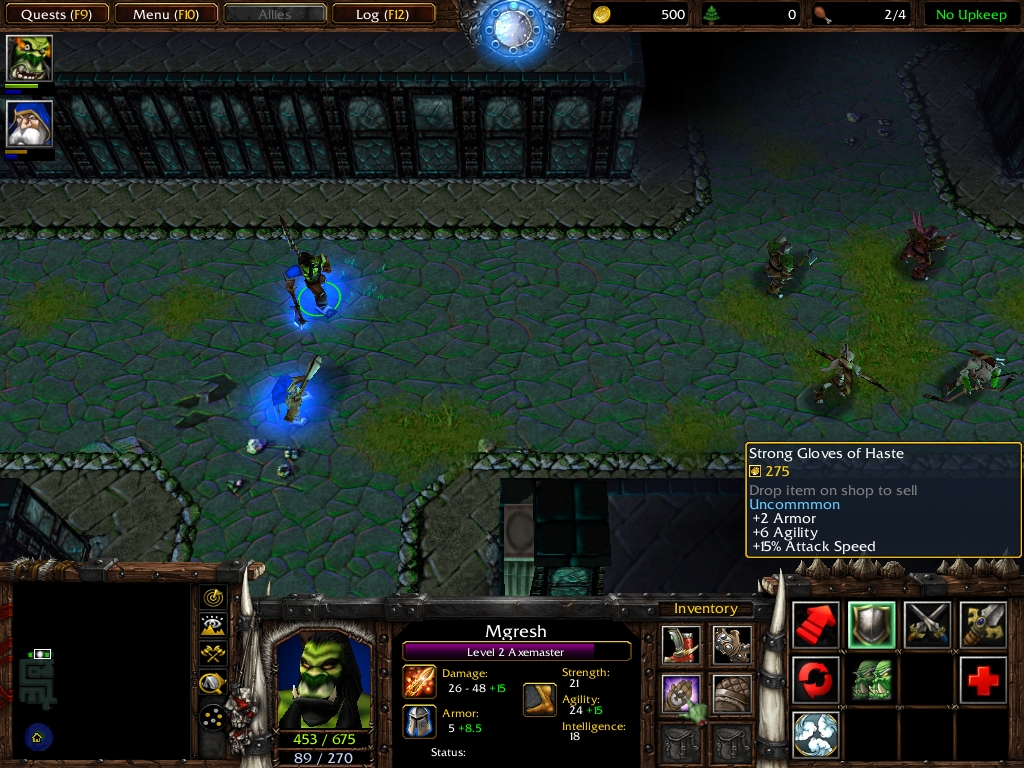 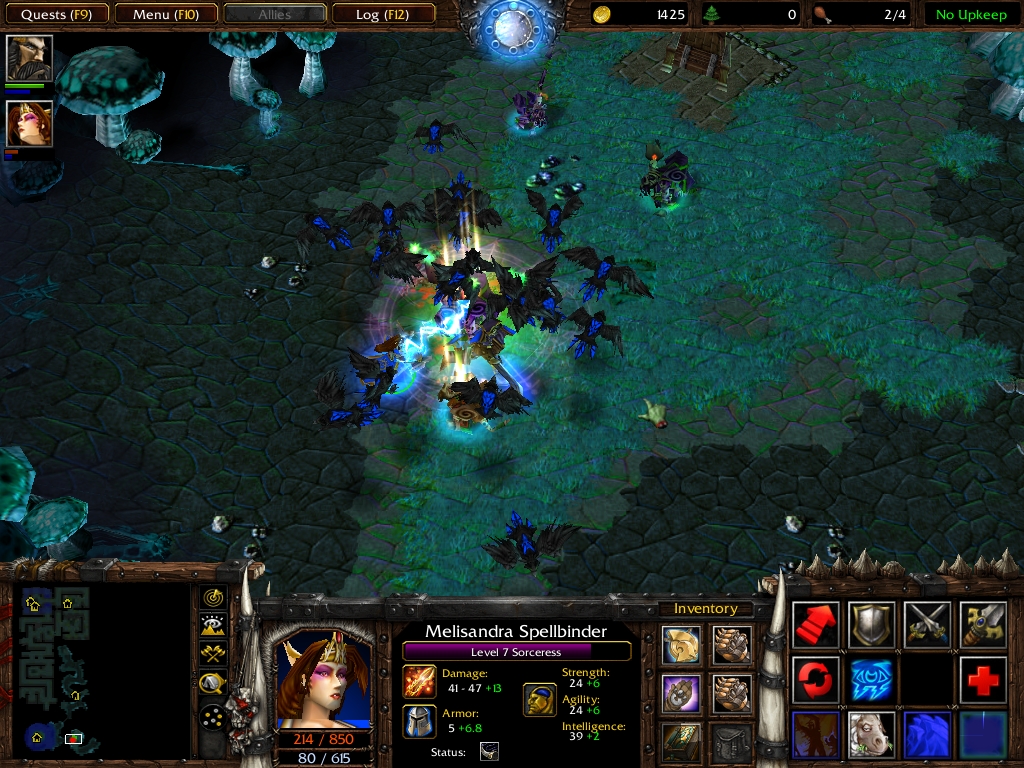 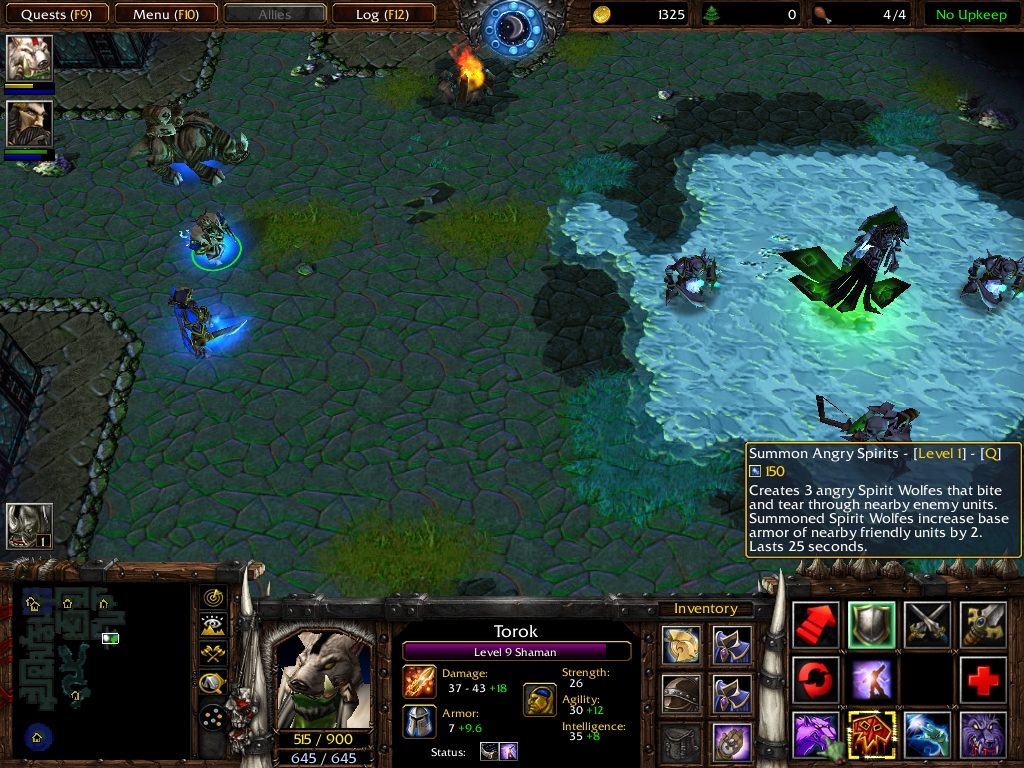 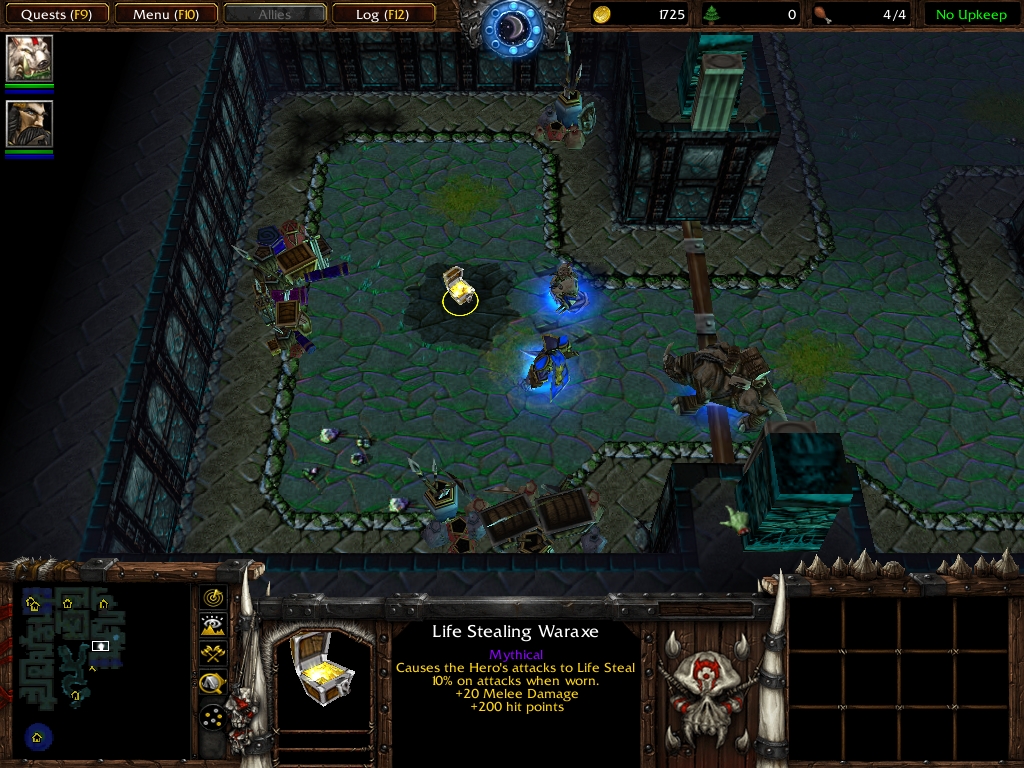 The map isnt protected in any way so if you would like to look
at it in the editor for inspiration or anything feel free to do so cuz idgaf.

Maps 6
I suggest improving your description, also a changelog needs to be present as far as I know. Try adding screenshots too. I sincerely am not any kind of map reviewer but if you want I'll download the map and give you a little more feedback.

Maps 1
Yea dude! Download it and give feedback pls!
This is my first time submitting anything on here so i am a bit of a noob when it comes to the discription and shit but i will look in to it!
I saw the other post about "defence of the base" were the guy has models and icons of every class which looked really cool.

Overall:
Okay so the overall gameplay feels nicely paced most of the times and the aura of the whole place seems like what it should, the terrain isn't outstanding but it is nice enough for the genre of the map I suppose. Heroes seem to be fairly balanced compared to each other and the fact that you can pick 2 heroes makes the thing more pleasant.

Some "Failed" Things:
Sometimes the Learn tooltips do not match the "actuall" tooltip (For an example the Rifleman's "Firebolt (Q)" says it has a 4 second stun on level 1 upon learning but it says 5 seconds in the general tooltip. The gates that require "Silver Keys" spam you whenever any of your units enters its activation area, I suggest setting a delay between the massages via turning the trigger of for a few seconds. The 1st bosses Death Coil ability seems to move him a few units upon use, try fixing that? Some units (mainly ranged) can snipe some bosses, I killed the 2nd boss without taking any damage at all using the Rifelman's ability "Mortar Strike" and then sniping him using ranged attacks through the gate. There are small grammar mistakes at some points, nothing major.

Recommendations:
Haunted Stashes do like literally no damage, try raising it up a bit. I think a minor shop selling just weaker potions should come before every boss fight just for sure, this is definetly not needed though. The first 2 bosses also felt kinda unchallenging, try raising their stats up just a little bit. Decrease the "Sturdy Gloves of Haste" drop rate, I feel like they're pretty much everywhere. Maybe move some bosses a bit just for sure.

Some last words:
Even through the mistakes I still enjoyed the gameplay well enough, the heroes aren't hard to manage and it is overall fun to sometimes just watch your enemies burn without giving them much chance. I will revisit this after you do fixes and some updates if you want and remember that I am not any map reviewer but for now;
I give this map a 2.5 out of 5 and am voting for "Awaiting Update" (or whatever it was )

Maps 1
Thanks dude really appreciate it!
Update will be coming within the next few days and I will fix the things you wrote about!

Is this a campaign? Or a RPG?

Maps 9 Tutorials 1
You should fix the changelog. They're nothing but a spam of 'x'.
Also fix the Map-Type that Aether encountered.

Maps 1
Thanks for the review!
Update coming soon!
ImNotTheWereWolf is an account that I made a long time ago and then forgot about, since then Garkanka has become my new "nickname". And I cant make a new account called Garkanka because my email is already in use for this account. I can change the author in the map but Im not sure how I would prove that I am Garkanka..

ImNotTheWereWolf said:
Thanks for the review!
Click to expand...

ImNotTheWereWolf said:
ImNotTheWereWolf is an account that I made a long time ago and then forgot about, since then Garkanka has become my new "nickname". And I cant make a new account called Garkanka because my email is already in use for this account. I can change the author in the map but Im not sure how I would prove that I am Garkanka..
Click to expand...

Maps 14 Tutorials 2
Additional comment:
Keep this up!
Update this or create a new one with different and improved terrain, heroes and variety and I think you can deserve a much higher score.
You have a good base for a really nice dungeon crawler. Well done!

Models 5 Maps 15
Well, I dont necessarily think the uniform, spartan look of the terrain is a bad thing.
Thats said here I some things I feel could be done better.
- Area indentity, that is more areas that have their own distinct mob types and look. There is some of that already in place; though I feel that it could be done much better. As of current there are some universal monsters that can be found in most areas.

- Stat items are a little too commonplace, its very easy find yourself 6 slotted with decent/good gear.

- Cooldowns are all over the place, certain abilities such as the rifleman's dog have absurdly log cooldowns, and the skill isn't quite powerful enough to warrant that.

- Could definitely have more visual distinction (size/colour) between enemy types. For example the Necromancer Kobolds are barely different in apearance from the normal caster types.

- An animation to show when a key has been removed from a hero would be nice.

Maps 3
This map is nice. For single player. You may exceed many limits. You can make the content abundant.

Nice, I see that you made quite a lot of improvements, while the map is still not too challenging I can see some people struggle a lil' bit. The terrain is nicer and for these reasons I decided to give this map a 3.7.

Reforged HD Models 5
Enemies late game can be a problem for the heroes. Try making the skills of the heroes scale with their stats, or maybe increase the max level of the basics skills to level 4 and the ultimate skills to level 2?

So far I've liked it but there are tooltip errors. I give it a 4/5 unless improved.

Maps 1
Yea, I think some agililty heroes like axemaster and warden with percentage based crit and evasion passives still might be a bit too strong whilst intelligence heroes would need higher level spells too be valid in the later stages.

Spells 9 JASS 1
I decided to give this map a try because it was an rpg where two heroes could be controlled. I playtested with the Keeper and the Tauren heroes. Spoilers abound.

Gameplay
Example of cheesing the AI:
Tauren:
His abilities are rather boring and become irrelevant rather quickly, especially since an ability can only be levelled up every 4 levels.

Keeper:
This hero feels broken with Rejuvenation and two disables.

Maps 1
Thanks for the review watermelon! A lot of really good feedback!

I am currently working on and update of this map where the tooltip issues you mentioned will be fixed!

I will also be reworking the Druid, having two CC does seem broken.
There will be a lot more heroes to choose from and the hero vault will get a nice polish.
All heroes will have 3 levels in their ults so that the level 15 cap will make more sense.
This will hopefully also make spells/spellcasters scale better.
The Druid ult for example will be able to summon diffrent kinds of vulnerable treants and use Tranquility at higher levels.

About the War Stomp icon, I think it fits better with a Tauren than the Orc Hand icon that Endurance Aura Normally has.
But yea I get what you mean, maybe changing the name of the spell will make it look/feel better?
One hero dying in the new version will no longer be the end of the map, instead the player will have the option to go on with just the other hero.
I am doing this to make ressurecting more of a fitting spell mechanic. (The new Priest class will be able to ressurect dead heroes!)

I feel like kiting is a part of wc3 gameplay mechanic as long as it is not gamebreaking.
The units you are attacking should always be able to get to you to attack.
This is also why treants that the druid ultimate can summon will no longer be invulnerable.

Giving "cave entering units" a waypoint instead of moving camera is probably a good idea!
Opening all locked doors in the end is also a really good idea,
but I have thougt about making it so that the final ghost merchant can teleport you to other ghost merchants for pay.

I havent really been bothered with making a story for the map since I am not very good with that stuff + It would take me a long ass time to write it all in English.
The map is going to be harder and I'll give the ending more of an epic feel with cinematics and shit.

Models 3 Maps 1
* Kodo's devour apparently stops working after eating a tree and its tooltip says they can eat destructibles. You should also be able to hire more than one, given the number of items to haul around.
* Near the first bandit boss, there's a sleeping invulnerable militia who doesn't react to the heroes or his buddy getting attacked.

cleavinghammer said:
* Near the first bandit boss, there's a sleeping invulnerable militia who doesn't react to the heroes or his buddy getting attacked.
Click to expand...

Have you tried poking him with a stick?

Update on the Devour bug: if you right-click a tree, the kodo starts eating every tree in sight.

The bandit boss in the northeast corner (near the Gold Key door) comes running in from offscreeen when you attack the units at the barricade.
Last edited: Jun 21, 2016

I really enjoy this type of maps and had fun playing your map! I have a few questions/comments. I've finished this map and I choose Keeper/Axemaster as my heroes. Some feedback.

I'll hide this for eventual spoilers.

Maps 1
Hi Liamz0r!
Thanks for the feedback! I'm glad you enjoyed the map!
I must say I didnt think anyone would find some of the secrets you listed!

Maps 4
2.5/5.
Pretty much drag and kill stationed units.
It would be nicer if it could be played in two players.

-the druid has the regeneration spell from the start; is that the ultimate since there's no other to choose from?
-the tauren cannot choose level two for another spell at level 3
Last edited: Jul 17, 2016

Nice map. That's pretty much it.

I beg of you....do something about that shipyard music.It's playing on loop and makes my ears bleed,i'm not sure if it have to do something with fact that i picked Hero Admiral.It's really interesting map i just wish there would be some dialogue in it,like Bosses actually taunting you or your heroes commenting on enemies and areas.
Last edited by a moderator: Nov 24, 2017
You must log in or register to reply here.