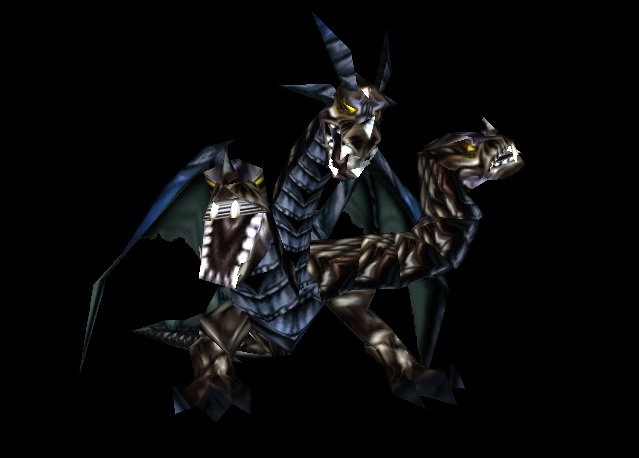 This bundle is marked as awaiting update. A staff member has requested changes to it before it can be approved.
View usage Statistics
Reactions: deepstrasz, Hawkwing and Rence Kristoff
Hi peeps,

Here's a little model of mine, I spent a lot of time in it and I'm quite happy of the result

It's supposed to be a dragon/hydra monster, concept is taken from Final Fantasy Tactics (see here, sorry there aren't many pictures of it on the web)

Basically, it's a heavily reworked model of WC3's black dragon. Skeleton has been redone from scratch, and I used hydra's animations, plus a whole custom set of flying animations, using the "Alternate" tag.

- Changing flying height for flying animations will cause some of them to seem a bit off, especially the death animation. Unfortunately I can't see any workaround for this.
- Filesize is a bit heavy, I apologize.
- No teamcolor except for the portrait background. My plan was to use it as an enemy creep so I didn't add some (lamest excuse 2016)

The_Silent
MODERATION Awaiting Update The model has some pretty visible issues ingame, during the walk animation the wings 'snap' down at the end of every animation. Also the neck texture is too repeated, try using the full stretch of the dragon rather than just...
Read full review...

Maps 3
Pretty Cool model you got here Chaosium
Nicely done, I can see no problems here for now.

I didn't test it extensively ingame, if anyone notice severe bugs, please let me know.

Maps 3
I'm probably younger than you
Well I can suggest you to create an icon for them, three heads in an icon are better than one (I know, the pun is bad)
Good Luck

Models 4
Ah yes, an icon...To be honest, I'm no good at icon making, the best I can do is take a screenshot and turn it into an icon, but it's kinda lame ^^"

Yup, the file size is a bit heavy.
Although I know it is a creep unit, maybe it could look better with team color.

Models 32 Icons 5 Maps 2
Although I don't think Hydras can fly, its a VERY AWSOME work that you done here! 6/5

this reminds me of the tri-headed dragon model i have in limbo, lol.. I still haven't managed to complete it the way i wanted xD

Models 4
I just realized I completely forgot about attachments... It's updated now. I'll try to see if I can unstiff the animations a bit.

Models 2 Maps 1 Spells 1
Very cool! Lots of hard work went into this, and a flying hydragon is a sick concept. I kinda feel like the orientation of the heads/necks is a little wonky; like the two extra heads almost look like arms (or rather, the way the necks & heads are oriented suggests to some two giant arms/hands on a black dragon/hydra body.

This looks great, could be used as a Boss in some maps or just an Upgraded version of a Dragon/Hydra.

It looks like Ghidorah in Godzilla series if we use the bronze dragon's skin replace the black dragon's. Icons 4
Good model, but Imo hydras are supposed to be a giant snake with multiple heads according to Greek mythology. They do not have feet (because it's a snake) and they definitely do not have dragon-like features. Overall the model is kinda nice, and has a lot of animations.

Models 55 Icons 115 Packs 8 Skins 15 Maps 1
MODERATION
Awaiting Update
The model has some pretty visible issues ingame, during the walk animation the wings 'snap' down at the end of every animation. Also the neck texture is too repeated, try using the full stretch of the dragon rather than just repeating segments.

Other than that it looks fine.

Maps 4
4/5.
This is not quite an easy model to properly animate.

Models 4
Oy, thanks y'all

I'll try to make changes request by The_Silent whenever I can
You must log in or register to reply here.