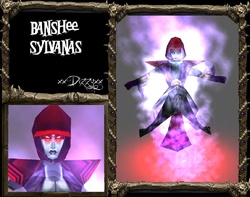 One of the first few models i have ever finished. This is how i envisioned Sylvanas when she was made into the first banshee.

Moderator
[img] [img] Misha [img] 29th Jul 2013 Moderator's Review: okay.. the whole lower part of the model, aka that skirt, is terribly static, leading to a rather weird 'dislocation' in the death anim, wouldn't it be better if ti was rigged to a few...
Read full review...
Reputation Statistics
Show Ignored Content