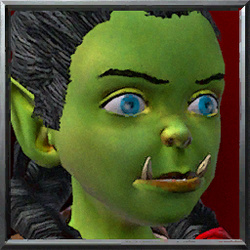 A child version of Thrall made from the human child model from Reforged. I also made a simple recolor as a mag'har to make Durotan, Thrall father, his own model as a child.

Thrall (birthname Go'el) is the son of Durotan, former chieftain of the Frostwolf clan, and Draka. He was born in the year 1 in their new home in the Alterac Mountains. Soon after the birth, Draka and the child accompanied Durotan to a secret meeting with Orgrim Doomhammer in Loch Modan. While in Loch Modan, Durotan warned Orgrim about the treachery of the warlock Gul'dan and his Shadow Council who used the orcish race as vassals to their ambition for power. Soon after, Durotan and his family were escorted by Orgrim's personal bodyguards on their way home to the north when in truth, the guards were actually assassins loyal to Gul'dan and brutally murdered Durotan and Draka while leaving the infant Go'el to die helplessly in the wilderness.

Go'el was found amongst the bloody bodies of his murdered parents somewhere in the north of Loch Modan by Aedelas Blackmoore, commander of the internment camps which held orcs after the end of the Second War. Blackmoore gave him the name Thrall, which was another word for "slave" in the human tongue, which would cling to the orc for the remainder of his life. Blackmoore returned to his fortress, Durnholde Keep, with Thrall, and raised him as a gladiator — with all the savagery of an orc, but with the keen strategic intellect of a human. He was trained and taught by many, wet-nursed by a human woman, and grew to befriend her daughter, Taretha Foxton. Thrall proved to be an excellent student and a phenomenal fighter. Thrall became a gladiator in Durnholde's arena and Aedelas' source of money. During one encounter in the arena, Prince Arthas Menethil visited Durnholde Keep in order to watch Thrall in a fight.

Durotan is the son of Garad, Chieftain of the Frostwolf clan, and Geyah. From the three brothers, Ga'nar and Fenris, Durotan was the one who embraced family and tradition most. Durotan became the heir of the Frostwolf clan, when Fenris vanished and Garad chose Durotan instead of hot-headed Ga'nar, in the years prior to the rise of the Horde.

During a Kosh'harg festival in Nagrand, he met a Blackrock orc named Orgrim, son of Telkar Doomhammer, and the two became fast friends despite belonging to different clans.
Previews