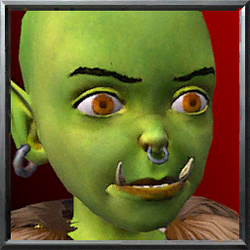 3 models I made from passive unit child.

All three are available in green skin and mag'har versions.

Traditionally, children are seen as children of the parents, but are raised as children of the clan. However, because of the newly unified Horde and the current diaspora of individual orc families creating homes and settling down in various areas around Durotar, the Barrens and beyond, this typical clan scheme has been changing, and life is beginning to become more centered around the nuclear family rather than the greater clan.

One tradition of the orcs on Draenor was a ceremony for newborns of the clan. The infant's parents would stand in a body of water near the encampment with the entire clan observing from shore. The mother would hand the baby to the father, who would then raise the child to the sky and proclaim the child as his, through himself and his father, and present the baby for the clan's blessings. The clan chieftain would then hold the baby and declare the infant under their protection, with the hope that they bring honor and glory to the clan. The chieftain's heir would then give a blessing. Finally the Elder Shaman would ask for the blessing of the elemental and wild spirits, and the hope that the ancestors would watch over the newborn.

In some clans, if the child appears sickly or frail, they will instead be drowned, likely by the father. A common expression of scorn is that an orc "should have been drowned at birth". This is likely the reason that the parents would stand in the water when presenting a newborn. The Blackrock clan and Bonechewer clan were noted for doing this without any qualms. The Frostwolf clan however, were known to have rejected such cruel practices.

Orcs begin weapons training at age 6, when they are nearly the size of an adult human. When they reach 12, they are considered strong enough to fight and allowed to participate in hunting parties. This is also the age they become eligible for the om'riggor rite of adulthood and for the courting hunt, making them full-grown adults.
Previews