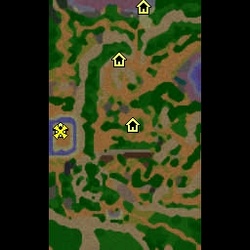 Ok this is UPdated beta version of my game.
Story goes like this, orcs were having war with the undeads when humans came and conquer part of their land, they took orchish city and turned it to human one.

Now party of 3 heroes, with their skills will try to lvl up and defeat dark wizard.

What does this map contain ?

First boss:
17500 hp
can summon 3 water elementals, they last 10 seconds.
can call upon a meteor shower, spell will hit all unfriendly to him units in 450 range.

Almost 7000 hp
Can summon 2 treants to aid him in combat
can cast earth shield and natures blessing, these spells are used by druid if you are playing one. ! Purge him imidiatly if one of you have night monk hero.

He comes in rexxar's defense event, after several waves of realy strong creeps lich will show up, he can cast frost nova and death and decay spells.

Its dark wizard, he has 25000 hp.
bolts of death ability, he will cast several bolts which will affect all your heroes.strong damage.
His second ability is nice and can be evaded, once he he mark several random points in his close, try to move your heroes away cuz in 150 range from each point about 400 damage will be delt ( only to your heroes, and summoned units)

1) Rexxar's defense event
2) PvP small tournament - not done
3) (i have to think about what it can be)
4) town conquer, after you have defeted all human units in town, orcs and trolls will enter it once again, but also 5 seconds after you destroy each tower it will be replaced with new orc tower.

There you can find many items, but most of them are blizzard ones.
Druid, dark shaman, and blood guard have their own class items, these can be droped from first boss.
Also there are more several custom items you can buy in shop just a little north from starting hill.
Some of items will provide spell power bonuses, on most spells is told how much spell bonus it will recive from item and effect.If there is not, that spell will recive 40% spell bonus from total spell bonus your hero has from items and effects.
And do not forget spell power from 2 items of same type will not stack !

1) Druid - pure healer
2) Dark shaman - aoe damage dealer, has 1 buff spell -> increases nearby friendly heroes inteligence by 15/25/35 but also reduces his strength for 15/25/35 that will last 40 seconds. !!! Items which provides spell power will affect only inteligence gained, but not strength lost, so he cant by just buffing up

O yes i have added cinematic on start.

Next thing ill do will be improving icons(by that i mean downloading some custom icons...), and finishing events.