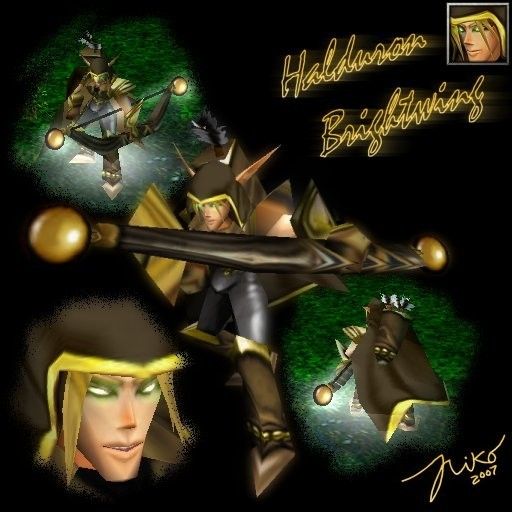 This bundle is marked as approved. It works and satisfies the submission rules.
View usage Statistics Legacy download
Reactions: Sclammerz, Heinvers, JesusHipster and 2 others
By: R.A.N.G.I.T.
(N stands for my name, Niko)

Ranger-General of Silvermoon.
This model is based on Sylvanas Windrunner, the idea came from MC !'s Warcraft II Male Elf Ranger which was based on Shandris that was made a very long time ago, credits to him on that. =D
My very first submitted model and also the very first model I ever tried modifying seriously, please do give credits if you use it. Thanks! =)
Better yet, tell me which map you'll use it for, so that I can play your map! =D
Oh! and btw, it's alright to modify this model without my permission, but please if ever you do, don't forget to give us some credit.. Hehe! Thanks again! =D

List of things that were modified:
Basically, I tried to remake what MC ! has done with his Male Elf Ranger. (Increasing the width of the cape and decreasing the size of the chest, so that it looks a bit different from Sylvanas'). :O
Gave the model the same head as his portrait, it looks so much better!
Face inspired by Blood+ Haji.
Gave him his teeth.
No more holes on his pelvis.
Added a spell channel animation which came from Evil Sylvanas.
Gave him glowing green eyes to show that he is a Blood-Elf. (Also came from Evil Sylvanas)
Changed the death sound to that of a Paladin.
Added dissipate sound and collision shapes.
Armor for the skin came from the Human Mage.
UV Mapping.

Bug FIXED:
Found out that the arrows he shoots on his Stand Victory animation doesn't show up (It's actually a problem with the MaterialID, which I forgot to change before). Well, now it shows up. =)

Time it took to finish this model:
Crazy! This model took me more than a month to finish..
I really don't know anything about modelling.
At first, I just wanted to re-skin MC !'s Male Elf Ranger, but I wasn't satisfied with the results, so I made this guy after.

Some other stuffs:
Since this guy is a bit too small, I'd recommend setting his model scale to 1.35.
As for his voice, BloodElfSorceror fits him perfectly! especially since Halduron, is after-all.. a Blood-Elf! =D
If there are any bugs on this model, just tell me, I'll try to fix it.. =)

Models 14 Icons 22
This is one of the most perfect rangers I've ever seen and trust me I have seen many of these models. It only needs to be team colored.

Models 1 Icons 1
Things that were modified: Forgot to say that I gave him his teeth.. =D

To Elenai: Thanks! ^^ Actually, I removed his team color on purpose, since it could still be determined by his hero glow.. hehe! but if you want, I could put it back and post it here.

To Wolverabid: Cool! Thanks for approving it! ^^

I have seen a lot of ranger models but yours has got to be the best Great Job!

Models 1 Icons 1
To Ivanneth: you make maps huh? cool! well, thanks for the rating! =D

Models 1 Icons 1
[Minor Update]
BUG Fixed: I opened up Warcraft 3 Viewer and noticed that during his Stand Victory animation, the skin of his arrows were not showing up (I forgot to change the MaterialID). I uploaded the FIXED version just now.

Since this involves just changing the MaterialID number, anyone could do it, so you won't need to redownload it again.

To those who would like to do it manually:

Convert HalduronBrightwing.mdx to .mdl using War3FileConverter (could be found on the tools section), then once converted, open the .mdl file on notepad then search for geoset, go to the 4th geoset (counting from 0-4) scroll down a little and you guys should see MaterialID 3, change it to MaterialID 0.. and it should work fine by now. (If you guys don't wanna go through all this trouble, you could just redownload it!) =D

Maps 7
Yes, I make maps. The ones I have currently uploaded are this and that, made two years ago.

Maps 1
How Do You Add Models To A Map?!
Every Single Tutorial That Claims To Help Is All Bull****!!! Help Please...

3/
Import the Texture files -- only the ones highlighted RED in the &quot;Skins&quot; section of a model page.

4/
Change the path of the texture files (.blp) to what it is on the page of the model; Textures\HalduronBrightwing.blp in this case. (Since Textures\Green_Glow3.blp is an ingame texture, it is in WC3, and doesn't need to be imported).

5/
Save the map and close down World Editor. Opening / Creating a new map, and then going back to the old one works too.

7/
Check if ALL the textures have the right path, and try deleting and importing them again.

I'm a &quot;new&quot; model maker.. And I would like some help.. I just want to change the texture of a sorceress I've made a new BLP file for her... (not yours) -- I've importet the skin to the modle editor.. But I need help to make it work.. Please if you would be so sweet to help me contact me on [email protected] (MSN/email)

Models 1 Icons 1
To Ivanneth:
very user friendly guide you got there, so much detail, well, thanks for explaining dude.. ^^

To mcp:
it seems that what you want to do it to just change the skin, not to make another model for it.. that would be easier to explain.. hehe.. here we go..

1.) import it to your map.
2.) change the path to: Units\Human\Sorceress\Sorceress.blp

I guess that's it.. there is another way though.. this requires editing the model using notepad, it's pretty easy once you get the hang of it.. this other way will make you be able to use both the original model and skin, and your custom model with custom skin.. although I won't be explaining it here anymore, you can easily find a tutorial about it in the forums.. hope this helps solve your problem.. ^^

Icons 2 Maps 1
can u make a morph that makes him carry a sword?

Finally! people may stop using Sylvanas As Legolas in maps.

Great Job on the model too.

For some reason my World Editor won't recognize the model. I've converted the mdx to mdl, and everything the tutorials say. It just shows up as a green and black checkered box.. can someone help?

User Interface 1
R.A.N.G.I.T. Thank you for making this model, i have been looking for a male ranger/Archer for a long time!!
-PS-
you should make a whole new race- high elves, Even if its some high elves and blood elves, there is not a whole race.

I still can't get this model to work, even with the right path for the texture.

10/10
An amazing model, even moreso due to the fact that is your first. I am impressed with the model, and will continue to follow your &quot;career&quot; of modeling.

Ha I needed a male archer, this is perfect!

by me its the same problem, ObsidianPHoenix by me (when i test my map ) it is only a shadow Oo but the model looks cool (Good work!^^)
can someone help me?

Finnally i found a male ranger!!

Uber dude just looking at it shows your dedication 5/5

Nice Work! I'd like to use it for the main character hero in a campaign I'm trying to piece together. I'm only at the development stage. (Simply making and testing custom unit, and ability data so I can import it into the actual campaign maps) I will of course accredit your work to the model. 10/10

You have to custom path a model too if you need custom textures for it. It took me a while to get it too. So say the custom texture is textures\unit.blp, make the custom model textures\unit.mdx. of course, some models are diffrent, and the creator will tell you otherwise, if you cant find the original creator, just look at the readme, it's usually there.

I wish someone would make this model with that guy holding a staff. It'll be perfect for the map i'm making. If anyone would help please leave me a message. Yeah thanks alot.
As for this model, i like the level of detail the face has. Its been tiring searching for models with this much detail. And i'm not talking about the portrait. There are no flaws on the rest of the body too. 5/5.


ObsidianPHoenix said:
I still can't get this model to work, even with the right path for the texture.
Click to expand...

As for his problem, try copying the files to your Warcraft III folder. So for example, if i were you, i would copy and paste the .mdx file and .blp files for this model in my E:\Warcraft III folder. That should work. If not, the file is probably corrupt, so try downloading and importing it one more time.
I hope this helps.

sweet ima use this in ma campaign ill let u play it when its done but im new too this so its gunna take i while :S

Skins 2
AARGGGH! the face reminds me of mickel Jackson!

Models 1
Awesome model.
But I must note: if he is a high elf, why does he have a green glow in his eyes(high elves have blue glow, blood elves have green)

Nice model, nice icon, very nice. Though Im not lucky enough to have more than a few uses for this, I am very very impressed. This is going to be my "Halduron Brightwing" Model in my "Invasion of Quel'thalas" map. Im giving you creds.

There is just one thing about the model Im not so sure I like, the entire armor he has is based on brown going to a shade or tint, I would mabye try some new colours, look at it and see if its awsome or not.

Quote-Awesome model.
But I must note: if he is a high elf, why does he have a green glow in his eyes(high elves have blue glow, blood elves have green)-Unquote
Halduron brightwing is one of the bosses of silvermoon , he is a bloodelf, even if he did put this in this high elf section.
Last edited: Jun 19, 2009

Models 2 Icons 24 Skins 10 Maps 5 Templates 1
This is perfect for a map I am making. Except I need a version that does not have hero glow. T.T

Hmm, opened the model. His cape needs to be team colored for my purposes. And the cape animates a little weird.

Maps 1
I think its good he aint team colored. Actually, i just need a model which aint. So great job there

Models 2 Maps 2
Hi, I've used this resource in my map Siege of Helms Deep, thank you for creating/uploading this! Credits have been given!

love it. 10/5. i really needed a hero without a team color as im making a sorta rpg style game. going to use this model time and again.
You must log in or register to reply here.