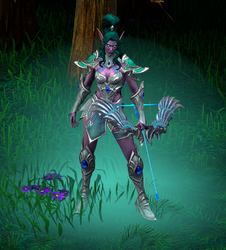 This is a custom model that I created for Tyrande dismounted from her mount.

Unlike some of my other uploads, this Tyrande is not "a Blizzard model from the Beta," but is rather a model that I created by doing animation transfers, and then a bunch of manual frame-by-frame tweaks on that stupid arrow on her bow so that it would look half-decent during the Attack animation.

She still draws the arrow out of a nonexistent quiver, but if you really don't like that, then download Retera Model Studio and geomerge a quiver onto there. I give you full permission to edit this however you want (as I generally do with all my models whenever I remember to specify) because these models are literally just derivatives of Blizzard artwork anyway, so I think it's only logical you should be able to make a further derivative work off of them.

Edit: Edited the bundle so that "Stand Victory" is renamed to "Spell" and is nonlooping, so that Tyrande looks good when casting Owl Scout.
Previews