The Fungeon is a 2v2v2v2 Hero Arena/Dungeon Crawler. There are 14 Heroes to choose from, all of which have very different and, (for the most part), heavily triggered abilities. You and your partner will have to work together with uber-micro to dominate the Fungeon, as the mobs will not fool around. At the mid-point, lie the Spider Mini-Boss, providing Ample Reward to the team that can down it. After each boss death, a round of PvP in the Arena is had, providing for dynamic 2v2v2v2 fights. At the end of the Fungeon lies 3 bosses, one of which must at least be downed before the Fungeon Master himself can be confronted. The winner is the one who wins the PvP match after downing the Master.

Features
Graveyard Towers - Take as many as you can, as their strength grows with the more you have. Your team resurrects at the last tower you took.

Customized, and strange, Items - It's not enough to be skilled with your Hero and work well with your teammate. You two must both itemize your Heroes properly.

PvP - While there is certainly enjoyable PvE, there is non-stop PvP, as you must fight for the right to kill Mobs, providing Gold for Items, so that you can dominate in more PvP.

Scripted, Distinct Boss Fights - Breakaway from the Fungeon to do battle with the Bosses. Defeating a boss will provide a Rune at the beginning of the PvP Arena to buff your team for the fight.

Fourteen Custom-Unique Heroes - A mix of old-fashioned abilities (you can't go wrong with Chain Lightning) mixed in with new abilities (Heavy on the triggers, light on the leaks)

View Profile
The Templar is one of three Tank-style Heroes found in the Fungeon. A beefy fighter, the Templar is not one to fall quickly in fights. He is also one of two Heroes to have a direct Healing spell, thus greatly increasing the survivability of his team, regardless of the partner. When teamed with the Keeper of Nature or Paladin, you know the PvP fights will last a bit.

The abilities of the Templar are all built around the idea of taking hits, and shrugging them off. Lay on Hands is as basic a spell that can be found in the Fungeon, granting a heal instantly to a friendly unit. Shield Block will drastically reduce damage taken from attacks, especially at the higher levels. Retribution Aura will punish those foes with flat damage when melee attacked. Enter the Ring works wonders on closing in on enemies, both in PvP and PvE, and provides synergy with a ranged-Hero teammate. 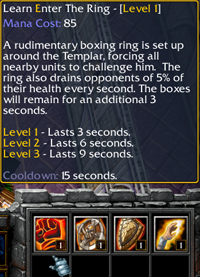 Enter the Ring combined with Retribution Aura is great against bosses with summons.


Enter the Ring on the Troll Miniboss
Retribution Aura is destroying the Troll's pups, while the HP Drain on the Miniboss has taken it's toll on his large Max HP. 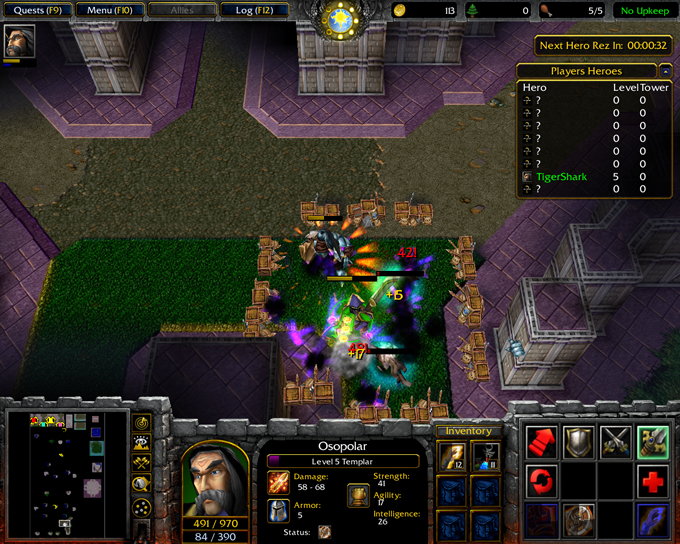 Enter the Ring on the Spider Boss
While the Ring does inhibit your ability to run from the very damaging, patrolling frost orbs, it will bring the Ice Spider down swiftly, even on a solo match like this. 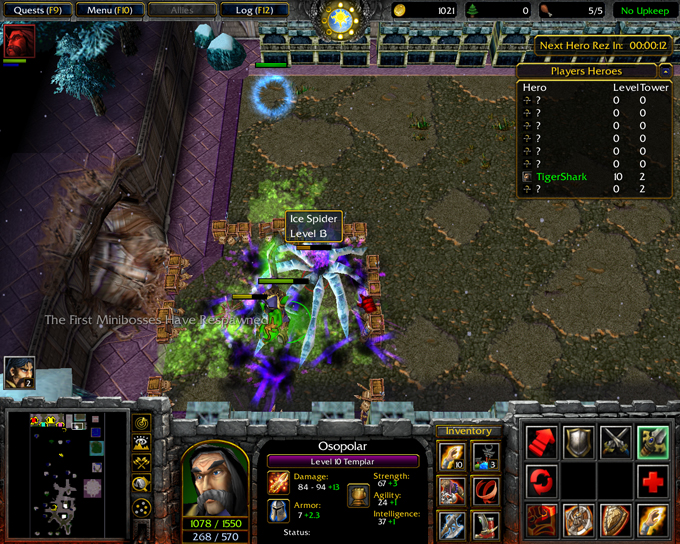 Recommended Build/Items
Recommended Items:
With more than likely having to be the Tank of the team, then clearly gear that helps take damage will be your friend. Boots of Protection (+45 speed, +2 Armor) helps not only get escaping foes with Enter the Ring, but gives the obvious help with armor. If you are going for Lay on Hands, having the Pendant of Three Stars helps, as it gives you the extra mana while also boosting your armor and HP. At the Tier 2, the Orb of Shockwave, with it's beefy Str and Dmg increase is a good choice. At the Secret Shop, if you can afford it, the Iron Fist (+20 Str) is another surefire choice.

Recommended Build:
Like most Heroes, the build you want really depends on your ally and what they are planning to do. If they happen to have a healing move, this can really free you up to focus on Enter the Ring and Retribution Aura.
Enter The Ring - A solid choice that is great in PvP and PvE against bosses. Be careful on the timing of use, as it can have a drastic effect.
Retribution Aura - Avoid this if all the enemy heroes are Ranged Heroes. If however, an opponent is the Bearmancer, this will destroy his Bearlings.
Shield Block - A passive ability, this can help save mana for other crucial moves.
Lay on Hands - One of the few Direct Heals, you may find yourself getting at least Rank 1 to help out in PvP.

View Profile
With a name like the "Xtreme Dark Templar" (or "XD" as he shall be known from here on out), you know he must be cool. I mean, it's spelled with an X. It's pretty Extreme.

The XD works differently from all the other Heroes, as he technically has "6" moves. Two of them, however, are simply a "Strike" move and an "Augment" move, and do different actions based on the "Stance" the XD is in. The XD has 4 Stances that give off an aura, and affect his Strike and Augment. Here we see the Tooltip for learning the Combat Stance. It describes the Strike and Augment ability, and what the actual aura does. 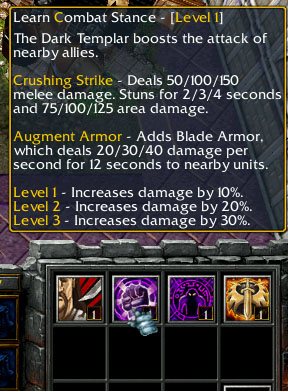 The Combat Aura is great for doing AoE damage, and can be a boon if your partner lacks in AoE. Here, in the early game, playing solo (I will warn you this is not a walk-in-the-park), Combat Stance is quite beneficial, as it's Augment is hurting the Level 1 Ghouls while I take out their Generator. 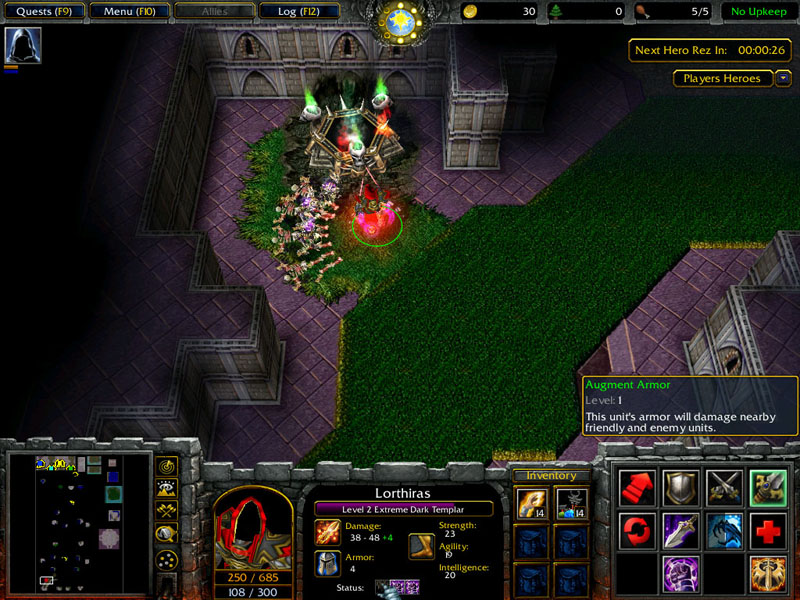 Combat Stance isn't the only good stance, of course. Otherwise, what fun would the game be? Here, we see Zeal stance at work. Zeal Stance's moves work to create After-Images of the XD and Allies, confusing the enemy, drawing aggro, and dishing out extra damage. This is a Strike-based Image, which does full damage, but only lasts 3 seconds. Zeal Aura can be great for taking down Graveyard Towers. 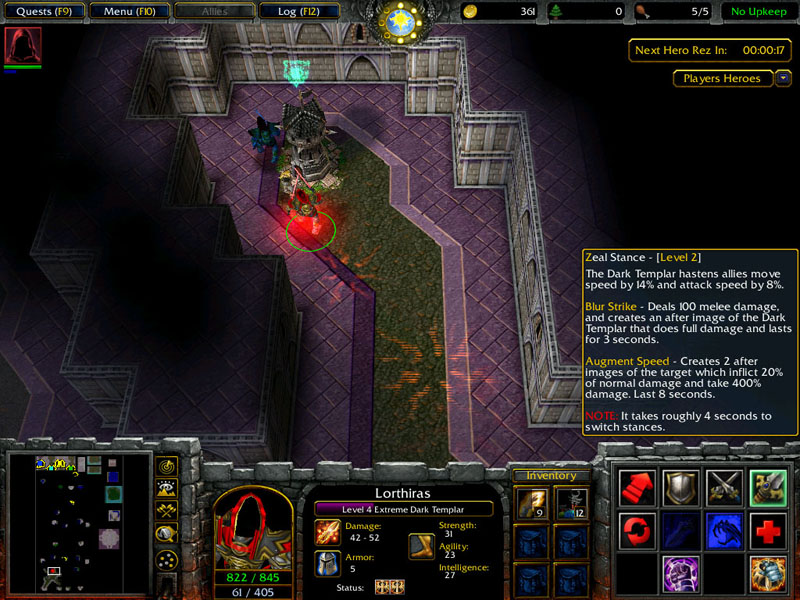 Recommended Build/Items
Recommended Items:
With the XD, it's going to be all about Upping that Melee Damage and Survivability. He will typically have just enough mana to get by. Items like the Panderan Special (Crit & Dodge), the Boots of Haste (Movespeed and Attack Speed) are good staples of an XD build. As an Agility Hero, he certainly could benefit from the Lightning Orb.

Recommended Build:
Really, any two Aura's will work out great. The big thing to look for is what your partner is. If you're solo, then I recommend the Combat Aura (for early game AoE to not get behind). It really breaks down well like this:
Combat - great for AoE
Zeal - great for PvP and Towers
Shadow - wonderful for Survivability and Boss Fights
Assassination - great for being a glass cannon.

Also, if you are with a Summon Hero like the Death Eater or Bearmancer, your aura's will have a huge effect. Avoid Combat with the Death Eater, as her Statue's Aura won't stack with yours.
Against a summon Hero, Assassination Aura will decimate their summons. Difficult choices... 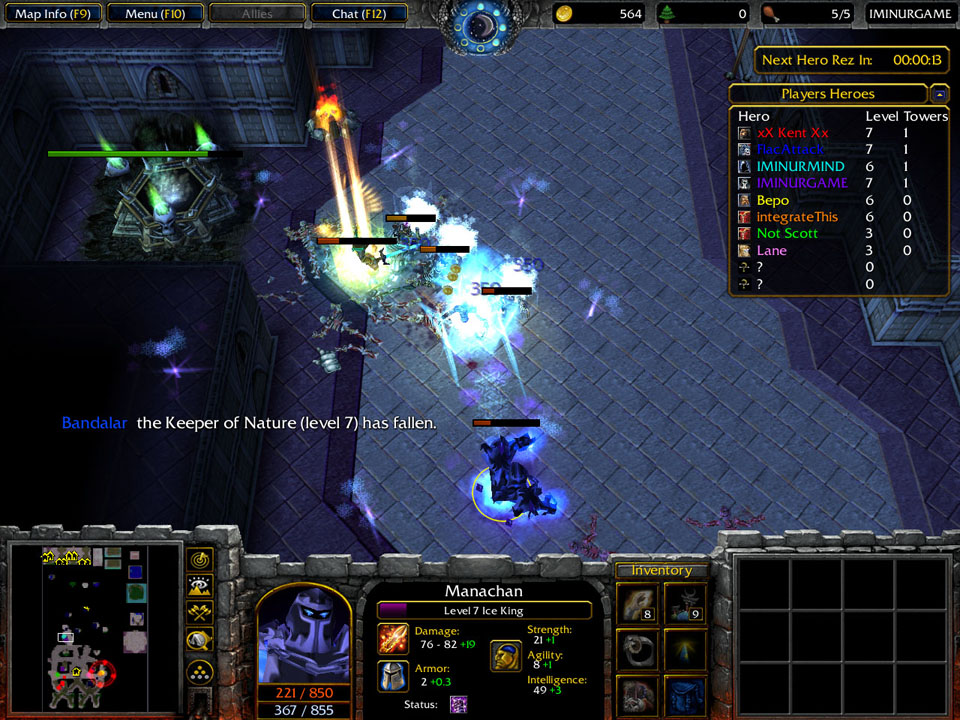 Here we see the "Trapper" doing what she does best, pulling out a Trap Card on the "Xtreme Dark Templar" (or XD), which has changed him into a halp-less female villager. Oh noes! 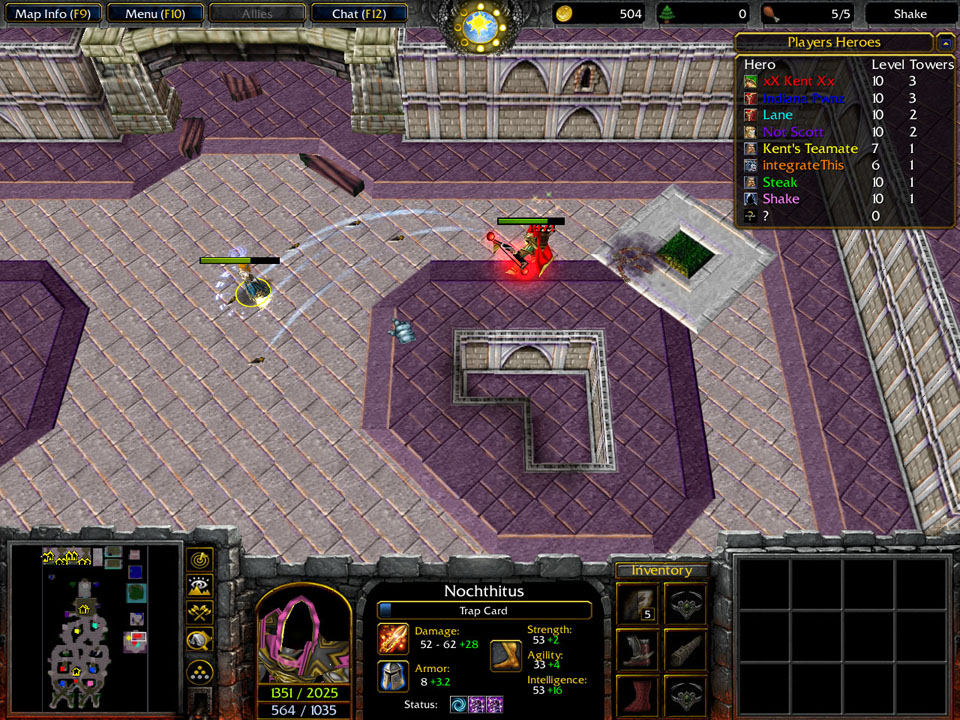 One of the "side" effects of the Fungeon. Many difficult decisions on whether to gank the mob for the last-hit, or to just kill that other annoying player. 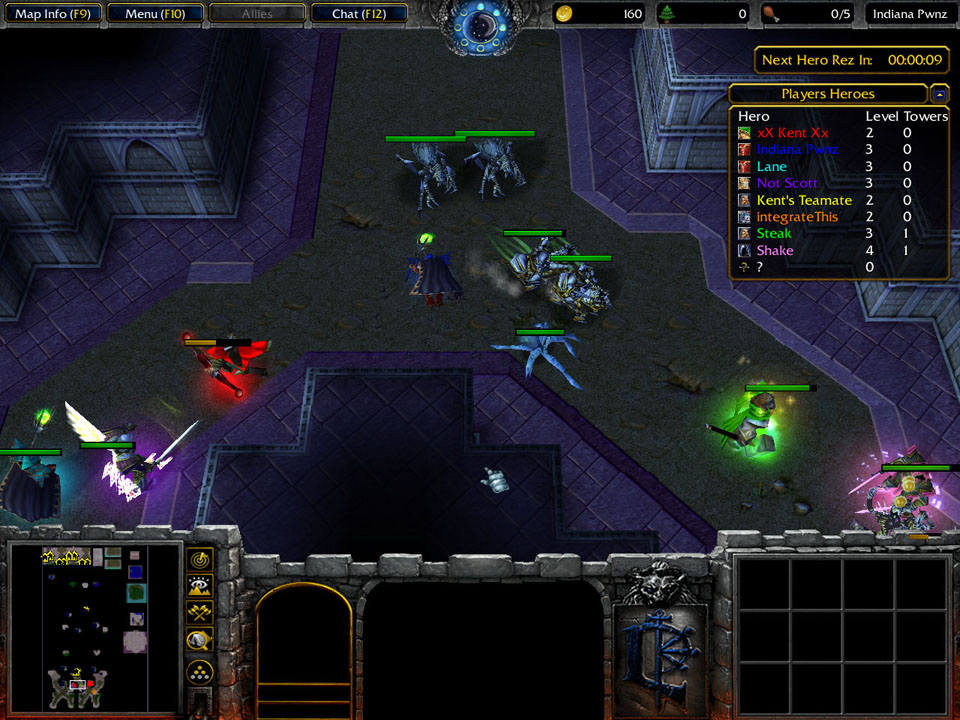 Note: It is Strongly recommended you have at least 6 players to fully play this game. It can theoretically be played with 2 to experience just the PvE. But where's the fun in that?

Known Leaks: There are a few (around 3-6) GUI triggers that I am pretty sure leak a thing or two, but they do not run repetitively, just once at startup.

Known Bugs: There is a -debug mode for first player, and with that the commands -herocheck to get a view of the state of all Heroes. There is a small chance for the game, about 3/4 of the way through, to all of a sudden fail to handle a Hero, and it won't rez, or if during the PvP Arena, the game will fail to realize it is dead. If this happens, try -debug and -herocheck, and please, by all means, let me know what is wrong so I can fix it. This is version 0.91 for a reason.

v.91
-Tweaked the cinematic a little. Probably will again in the future.
-Added Single-Player detection, and Single-Player cheat code
- -lvlup | Will level up a Hero you have selected
-Slight changes to loading screen, and timing on Free Play mode initiating

Note: There is a LOT of custom scripts in this code. Feel free to use them as you wish. All I ask is that you credit me, and lemme know about it, cause I'd like to know where my code is going, how it's helping. Also if its confusing, lemme know and i can try to help you out.

Balance & Bugs
I am very aware of a large bug that sometimes causes a hero to fail to respawn, and also can lock up the PvP Arena. Please, if this happen, have Player 1 do the following

this will turn on debug mode, which should show what the game is seeing when it "sees" the hero's. this will work for PvP Arena. If a Hero fails to Rez during normal play, type -herocheck to see what the game see's for the heroe's, and again, save the replay and send me it.

Also, I am 100% sure this game is not completely Balanced! If you think you've found a contentious balance issue that you think should be changed, i would love to hear it, but even more so, love to see it! Please, save the replay so i can see how Imbalanced it is. Thanks.

Moderator
05:32, 2nd Aug 2010 ap0calypse: Approved Although the terrain is a pain, the map is balanced and has some very good features and spells.
Read full review...
Reputation Statistics
Show Ignored Content