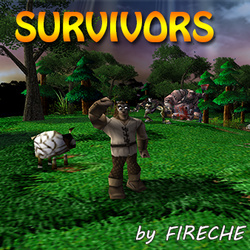 
Version 1.63 is ready to play! Alot of things have changed, read the changelogs again:


Please read F9 first if you play this game the first time!

Short description:
Collect, craft, mine, build a base and survive the nights.

How to play:
Mine ressources and build a base at daytime, When the night comes, different monsters spawn and will try to kill you. Start off by chopping some trees (attack the trees) and craft some basic tools such as the axe or pickaxe.

Recipes:
You gain crafting points by leveling up your hero. Those you can use to spend on learning new recipes such as Axe, Pickaxe, Sword, Bow, Wall, Towers etc. Once unlocked and learned you can craft them.

Warcraft 3 - Survivors Guide (new items are missing since this screenshot is for the version 1.3)

Items:
There are over 100 items and the most basic ones are:
- Axe (used to chop trees)
- Pickaxe (used to mine ores)
- Sword
- Barricade
- Hoe (used to gather food or plow the ground)
- Shovel (used to collect sand)

Hunger/Thirst/Energy:
Instead of Intelligence, Agility and Strength you will have hunger thirst and energy. Don't let them drop to 0 or you will start taking damage (not for energy). Without energy you can't mine and need to rest first.

Crafting:
Most items (except drops and some others) have to be crafted first. Crafting is made very simple: First you check the recipe of the item you would like to craft.

Ex.: Stick, is used to craft tools and requires 2 lumber. 1 Lumber in Slot 2 and 1 Lumber in Slot 4.
Place your crafting table and place the lumber in the correct spot, then press craft and voila you have a stick.

Save/Load:
There is a save/load possibility for the PVE gamemode. -save will save your current hero level+survived nights. Loading your character with lvl 50+ grants you better starting items. For example you get a wooden axe as a starting item at level 50 while a level 500 starts with golden tools.

Sgt.Pierce
I played this map with my team for hours in the past days and here's my review. (current level is 56) what I didn't like: -Hunger and thirst says when dropped to 0, hero will take damage overtime = what really happens is that it insta-kill the hero...
Read full review...

Joinma
It seemed the game that I found bugs was not recorded for unknown reasons. I am sorry for this. (It was the bug that prevented an ankh hero from appearing) I just won night 19 so I would like to give a review now. Bug: 1. when I clicked unlocking...
Read full review...

deepstrasz
1. Don't spam that perk related message. 2. Demolish has a passive icon aspect. You can use these to turn it into an active ability looking icon (if you want): Button Manager v1.8.2 BLP Lab v0.5.0 3. Why does player 1/red unlock things for everybody?...
Read full review...

deepstrasz
I see no credits list. You should add one in the game as well.
Read full review...
Reputation Statistics
Page 1 of 3
Show Ignored Content
Page 1 of 3