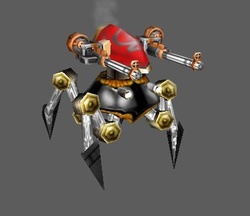 Well, a mod had asked me some time ago what my next model was going to be. I just gave him the following riddle: ''What walks like a spider, shoots like a tank and is neither undead nor Nerubian or a creature?'' Well, the answer is: the SR-6 Spider robot!

It walks like a spider, but has miniguns, hence it shoots like a tank. It's mechanical (i.e. neither undead, nor nerubian or organic).

I just made this as an addition to my tanks. It's supposed to be a robot of the same fraction. The four limb-like legs were the reason for its name. With its four legs, it can easily walk across almost any terrain, reaching from moon surface to swamp lands. The four legs also offer enough stability and balance to it, for allowing to mount double-armed weapon systems onto its turret. It's a fully automated robot, with man-power elimination and recognaissance as its main tasks. It can also serve as a destroyer of unarmed enemy supply convoys and such, but enemy vehicles and especially tanks and aircraft are a big threat to it. Its armor is not very resistant and its arms, though doubled, don't deal enough damage for making it suitable for assaults or battling medium to heavy-built enemies. One of its major advantages is the fact of being immune against nerve agents and biological weapons, since its ''pilot/driver'' is a fully automatic onboard computer. But it's major drawback is that it suffers double the amount of damage when hit with electrically charged weapons, like electro-canons and ion blasters. High voltages can easily bring down its CPU and therefor rendering it useless and harmless.

About the model: the mesh is partly scratch-made, partly assembled from existing models (like orc car and space marine). The animations and skeleton are from the Nerubian. Some of the anims are slightly modified, like the death anim. I just modified them a little bit and covered them with a new mesh and ingame skins.

Feel free to use it in any way you desire! Have fun with it!


-) portrait has been integrated into the actual model, so now both files (portrait ad model) are in the same file
-) customly remade attack anims (Attack 1 for ground and Attack 2 for aerial targets)
-) + 1 more stand animation
-) completely new, partly custom made Death animation
-) custom made Decay Flesh & Decay Bone anims
-) added new event objects (step sounds, footprints, etc.)
-) added some kind of metal holding stuff between the turret and the connection parts of the miniguns for a more realistic look


One last important note: the "color change" during the decay flesh anim is a technique that was originally invented by General Frank (a.k.a. Frankster). He's the one to be accredited for this, not me! My model uses a variation of this technique and a different texture.

Hope you like the model much more than the previous version! I spend literally many hours working on it! I must admit, this model was quite a challenge and a lot of work, but IMO it was worth it!

Due to some persisting problems with the WoW-skeleton/anims, i remade the model, this time using the Nerubian's skeleton + anims. Attack 1, Attack 2, Death, Decay Flesh, Decay Bones and Stand Portrait anims have been "customly made" (changed variations mostly of Stand 1 anim)

Now it has it all! Proper attachment points, sounds, special effects, etc.

For some reason, the portrait background appears sometimes shortly in the Warcraft 3 Editor program. However, it doesn't appear ingames, so you can safely use this model!

My special thanks to General Frank for pointing out the last little flaw and how to fix it! With his hint and help the last "problem" of this model could be finally fixed!

Added the Plasma Canon Version model to this one, so that they can be downloaded as a pack. The original Plasma Version was deleted afterwards.
Added ingame screen shots to make them fit the Hive's new rules and standards.
Also edited the death animations in both models to something more.....unique.

This is the basic version of this type of robot, armed with two gattlings. The minigun version is most frequently used for scouting, terrain exploration, asisting soldiers and as a sentry inside bases or facilities. Although capable of firing rapidly, its damage potential is limited. It can cause havoc to enemy infantry and smaller units though, but everything with a little bit of armor or slightly better firepower can easily outmatch it in combat. Nevertheless it still makes a good unit in large numbers or when the units' availability is limited due to the lack of resources.

This is the more evil version of the Spider Robot series. Same story as the minigun version but with considerably more firepower. Unfortunately, the armor is weak as the other version's armor but in comparison, it can cause much more damage. This one can be used well for attacking light tanks or trucks or light defense structures such as minigun bunkers. Equiped with two plasma canons it can easily incinerate infantry units and burn through most light armors. Unfortunately, the heavier weaponry has its price, in this case, the powerfull recoil these canons have. This fact limits their usability to ground targets only, which makes it susceptible to attacks from above (air units). In addition, high voltages and charged beams (like electro-canons and ion blasters) are also a huge menace to it.

The portrait is already integrated into both models!
The included plasma beam (doubled) missile is the fitting one for the second model (Plasma Version). For making it function properly ingames, the following changes should be done to the Spider Plasma Canon Model in Warcraft 3 World Editor (NOT Magos!):
In Warcraft 3 World Editor open the Object Editor. There, once you made the Spider Plasma Canon Unit, go in the model's properties to:
Art - Projectile Launch - Y and set its value to around 65
Art - Projectile Launch - Z and set its value to around 140
This ensures that the missile starts at the proper point of the model. This works only if the model isn't scaled! The model is naturally made to fit the marines size-wise.


Feel free to use it in any way you desire! Have fun with it!
Previews

Moderator
23:25, 26th Apr 2013 Misha: not really that good, the attacks are for some cannon, and the unit uses gatling guns.. jerking when firing makes no sense, change that or let the unit be still. there's also some issue of particles not disappearing on the...
Read full review...
Reputation Statistics
Page 1 of 2
Show Ignored Content
Page 1 of 2