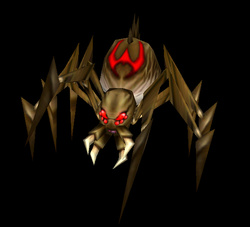 "Eight-legged monsters that haunt the branches of Mirkwood, these terrible creatures make their home in Dol Guldur and the Black Hollow of Mirkwood."
-Unknown

Texture came from "War of the Ring (2003)", and has been refined and rearranged to fit with Warcraft 3