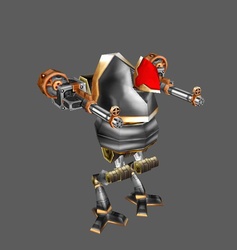 Some time ago i started making some robots and other futuristic models. One of them is this one, the Cassowary. The name is from the Kazuar from the Earth 2160 game series. The design is also made after the Kazuar, with some changes. The anims and skeleton are from the ingames (Warcraft) standard Draenei, with some modifications. Some unnecessary bones and helper objects got removed, the walk anim was also remade, same anim as before, but slower since the robot isn't supposed to be running at any given time. Portrait is integrated to the actual model. It too has been made to fit the Marines from size (no scaling needed).

General speaking, it features the same advantages as the SR-6 Spider robots. It's immune to biological weapons and nerve agents and can also walk over most terrains without having the troubles which wheels would have. Unfortunately, it also shares the drawback of being susceptible to charged weapons like electro canons and ion blasters, which can lay low its CPU and electronics. In comparison with the much smaller Spider though, it's much more versatile. Able to withstand more damage as causing more damage as well, it can be used for assaults and combat. It doens't make the best scout however, since its large size makes it easy to spot it and it's also slower than the Spider. Anyways it can safely be considered a good choice for most purposes, it's something like a good all-around-unit! Only heavy vehicles and big fortifications along with bomber air crafts can pose a danger to it, since with only two carrier units it's not as stable as a tank. The minigun version can attack both land and aerial targets.

Feel free to use it in any way you desire! Have fun with it!


Update 1: my thanks to SonOfSami for pointing out that the material of the exhaust was using the wrong skin. Fixed that now!
Previews