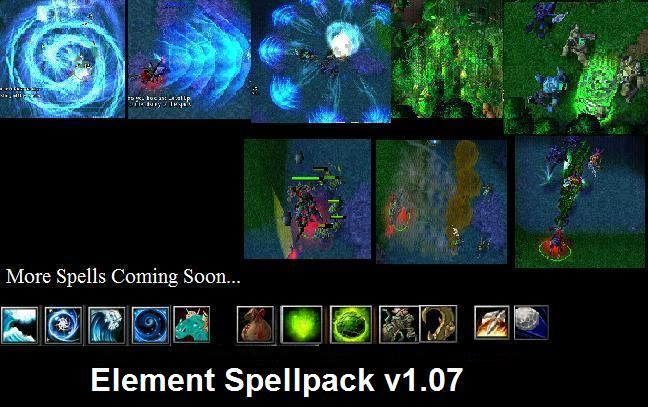 This bundle is marked as approved. It works and satisfies the submission rules.
View usage Statistics Legacy download
Reactions: deepstrasz, Oljin, Apheraz Lucent and 13 others
Screenshot does not show all the spells. Please test the map itself to look the spells

Summons an Orb of Water which absorbs water from the surroundings. If the Orb is in water, it gathers water more quickly. When the orb timer is up or when an enemy touches the Orb, the magical energies holding the water will be removed, causing waves of water to come from the Orb.
Contest Spell!
Summons a Water Wave that deals damage to units in a line. The wave gains damage and AoE if in water and lose damage and AoE on land.
Starts firing several jets of water at the target point which damages the first unit it hits, dealing damage and slightly knocking back.
Summons a whirl pool which sucks enemy units towards it and deal damage to them per second.
Nice Eye-Candy!
Summons a liquid elemental. The liquid elemental cannot attack but will leave a trail of water as it moves in a spiral.. The trail will slow units near it. When the elemtal dies, the trail will disappear. The elemental and the trail will cause damage when they disappear.
The hero throws a mystical dust at the target area. The dust regrows all trees in the area and gives a chance to summon a Tree Spirit out of a regrown tree.Tree Spirits are spiritual, thus able to move through obstacles. When a Tree Spirit is in water, it will increase the amount of hitpoints it heals on death. When the Tree Spirit dies, it heal allied units.
Contest Spell!
The hero summons Nature Spirits which move around him and heal his allies nearby. When the spirit touches a tree, the tree will be converted into a Walking Tree.
The hero summons a Nature Ward which channels energy from nearby trees. Every second, the ward will release all its channeled energy, healing allies and damaging enemies.
The hero throws a magical missle that causes roots to bind everything it touches
The hero summons roots from below the earth, impaling units within range of the roots. Each impaled unit takes damage and is flung into the air for a short duration.
The hero calls forth a sand storm that moves forward. The sand storm causes damage to all unit it touches and drags them along with the storm.
Protects the hero with Earthly armour. 3 rocks will start circling the hero and dealing damage to enemy units.

Please comment on the spells so I can improve them! +rep for comments!
Enjoy!


v1.07=>v1.07b
-Fixed a critical bug with Entangling Magic. Thanks to ELECTROLYTE for reporting the bug.

v1.06c=>1.07
Massive changes, first update in about 9 months.
-Improved Implementation of Nature spells and Water Spells
-Improved efficiency of Nature spells
-Fixed a bug with Rejuvenation Dust
-Fixed a bug with Entangling Magic that left the dummy units behind
-Rewrote Earth Armour to have more functionality and look better
-Earth Armour is now stackable
-Improved the functionality of Liquid Elemental.
-Improved the terrain check for Whirlpool

v1.05b=>v1.05c
Improved efficiency of most AoE effect spells. Updated Sand Storm to use Hashtables.
Also fixed a bug with Impaling Roots, which didn't allow it to go through trees.

v1.05=>v1.05b
Made Water Wave not use an indexing system. Uses Hashtables instead.

v1.04b=>v1.04c
Fixed a Mana Bug with Whirlpool when you cast it on land (its horrible, but I'll get it fixed soon ). Map should be 100% compatible with 1.24 now. Also, Impaling Roots had a bug which made it deal crazy amounts of damage. Its fixed now.

v1.03=>v1.03b
Fixed some leak removals and removed BJ in custom scripts (not sure if all were removed)

v1.07 is quite a massive update, and there are probably some bugs. I tried to eliminate all of them during my tests, but its difficult for me alone, so please report any bugs

Map Info View Resources In Use Preview Triggers Download
Reviews
21:56, 19th Oct 2008 Dr Super Good: Mini moderators have reported this is an ok spell and thus it has been approved.
Read full review...

Spells 2 Tutorials 1
If you updated this, it would be nice that you add a changelog...

Now, for the spells, the water spells seem ok, but you've got alot of problems considering removing leaks...
The problem is that you're removing locations and groups when they're not even present, thus doube-freeing or removing a null...
Let me give you an example:
(Nature Spirits)
Well here for instance, whether you creat the TempPoint2 which is conditional, it's being removed. So let's say condition returns false, you're calling to remove an already removed location... get what I'm saying?
I happens to most of the nature spells....

Icons 4 Tutorials 2
I like the spells, but the Grass Impale is too simple, its just renaming and coloring the tentacle and spell

How does the 'call DebugError (GetOwningPlayer(GetTriggerUnit... (etc...)' actually work? coz i tried using it for a different purpose and could not figure it out...?
By the way zack spells are pretty cool.

Slaydon said:
I like the spells, but the Grass Impale is too simple, its just renaming and coloring the tentacle and spell
Click to expand...

Impaling Roots is actually 100% triggered. It allows you to do stuff to the hit units that the normal impale can't do, like deal Damage Over Time or Entangle them. Also, it is possible to "Impale" units which are under the effect of entangling roots, ensnare and its likes. You can do lots of stuff with this kind of spell, you just need to know how to. Ask me if you need certain help in stuff.

How does the 'call DebugError (GetOwningPlayer(GetTriggerUnit... (etc...)' actually work? coz i tried using it for a different purpose and could not figure it out...?
By the way zack spells are pretty cool.
Click to expand...

Thanks. Also, DebugError is a function that xxdingo93xx made to show that Error message. The script for the function is in the map icon in the trigger editor (all the way at the top). That area is for you to imput code that you want to use for your map and xxdingo93xx wrote the function. You could copy it but you gotta remember to credit him. If you do copy it, you can use the error message function in your map as well.
xxdingo93xx rawks~!

very nice spells love all of them! keep up the good job mate! + rep

Icons 4 Tutorials 2
Okay zack, but if ive been you ive would have changed the model =)

Spells 2 Tutorials 1
Ummm new update? I'll check it whenever I get the chance

EDIT:
Well I expected a Jass spell... but nevermind
I didn't fully read the trigger (Sand one) but here are the issues:
#1 Sort of laggy... and since the sand effects are big and contain alot of particles, you can lessen them
#2 Globals, unlike Locals, don't need to be nulled...
Well looks good and doesn't have problems...
Gj!
Last edited: Jun 16, 2009

This is very good, but i think that whirlpool should be abel to be cast on land, or at least close to water. You could have another spell (Hydro jet?) going from the closest water two the middle of the whirlpool. also, your hero should automatically move to the center of the whirlpool, that might look better.
Also, The "Sand" behind the tornados in sand storm should fade out with the tornados. starting at the back.
And, the liquid elemental should move towards any near-by enemies, not just in its usual pattern.
Apart from all that, its all good.
Last edited: Jun 23, 2009

i dont like the way how snadstorm pushes units right pass trees, i think the victims should destroy trees when they are under the effects of sandstorm

Models 2 Spells 1 Tutorials 1
Thanks for all the comments
I will probably be updating this pack soon, with all the new rules, I gotta fix loads of stuff -_-

Maps 3
I found a bug. When you cast the Hydrojet on a point out of the range of it, the water starts shooting but the mage is just moving to the target.

The other spells are just awesome.

Spells 2 Tutorials 1
I see you're still updating it

Spells 2
Extremly cool spells...nice effects and once the leaks are cleaned up...perfect =D

Models 2 Spells 1 Tutorials 1
Lol? This isn't supposed to be a model.
Anyway, thanks, I guess.

Also, I'm updating my Spellpack to be more efficient and easier to implement. I'll update it when I get the will to finish the implementation thing.

Spells 17 Tutorials 3
the spells get corrupted

the damage variable dont exist according to the editor :/

Models 2 Spells 1 Tutorials 1
Oops. Sorry about that. I was planning to update all the spells at once, so I forgot about this.

Anyway, the fix has been done. Will look into the bug as mentioned.

Also, noticed some bugs while testing the spells. Fixed those too.

Zack1996 said:
Oops. Sorry about that. I was planning to update all the spells at once, so I forgot about this.

Anyway, the fix has been done. Will look into the bug as mentioned.

Also, noticed some bugs while testing the spells. Fixed those too.
Click to expand...

Good spellpack! Hope you fix and update it soon. +rep

Models 2 Spells 1 Tutorials 1
Ok, basically, TempPoint2 is a variable that I used to store a location. If the problem is an error message when saving the map (after importing the spells), please do the following:

BTW, I was 12 too when I joined the Hive, improved loads since then

EDIT: FINALLY UPDATED THE PACK! WOOT! I thank you guys for all the support so far, and I thank you for any future support
Last edited: Sep 23, 2010

Not sure if the spell is made that way or if it's a bug but, when you cast entangling magic it never stops it just keeps going in a line rooting anything caught in its path. It's just never ending.

ELECTROLYTE said:
Not sure if the spell is made that way or if it's a bug but, when you cast entangling magic it never stops it just keeps going in a line rooting anything caught in its path. It's just never ending.
Click to expand...

Confirmed. Thanks for the bug report, I'll fix it ASAP.
EDIT: Bug fixed. Thanks again.

Spells 3
This spell is so cool I like the Hydro Jet Very Cool!!

Models 6 Maps 1 Spells 3
it was about time this spellpack became the most downloaded spell map lol
love your spells dude 5/5 ;D

EDIT :
man i just love the hydro jet lol
it reminds me of the Hydro Pump that Blastiose from Pokemon has xD
Last edited: Oct 29, 2010

Tutorials 1
I really like these spells they are great 5/5!
I hope to see some Fire spells also

5/5
I can't call the "DedugError" in my map, how can I fix this problem?
Thanks.

I really Need This spell

Or can you Import the Spell on my map

There is the Link:
http://www.mediafire.com/download/s7n6mcgqse15z88/1Nagas+Life.w3x

finally found nature spells which are really leakless....already implemented them in my map and are working perfectly! thanks, great spells

Maps 1
Are the spells 3 leveled?

In the spell loop this line needs to be fixed:
Should be picked unit instead of triggering unit.

Anyways just wanna say thanks for such an awesome spell (if you're still here haha). I've been using hydro jet in my map for a while.

Maps 1
First i wasn't sure if it is still MUI when multiple spells use the same variables, but according to the other comments it still is...

anyway i just used some few of them, and those work fine thanks!

Icons 2 Maps 3
I really like earth armour spell! It works really well! I'm using it on my map thanks 5/5