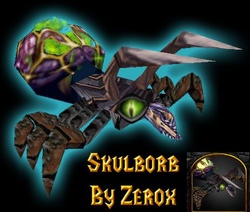 After aproximately 15+ hours I've finished my model for Modeling Mini-Contest #3. It's a critter of my own creation that I call a Skulborb. This was something I thought up and liked the idea enough to actually do it. Enjoy.

The skulborb is an ant-like creature found most commonly on barren worlds. With two antenna capable of electric shock and an explosive abdomen full of gas toxic to most smaller species, the skullborb is not one often hunted by other species. Terran Marines and Firebats have been known to destroy these creatures for sport due to their explosive nature. Though skulborbs have the capacity to be semi-dangerous most would find them rather docile as long as you just let them mind their own business. Skulborbs use their antennae to stun their prey into a state of temporary paralysis so that they may devour them slowly. Though the electric currents released from the antennae are only meant for stunning the skulborb's prey, if experienced in enough quantity it can be fatal.


​
Animations in Magos:
Note: There are more effects added in game and they loop perfectly. Magos and particles just don't loop well.

Death (Note: In-game there is a purple blood pool left behind rather than it just disappearing):

All in-game textures, custom animations from scratch, sound effects, particles, and only 426 polies. The skulborb will be a small light-weight addition to any map at only 65 kb.