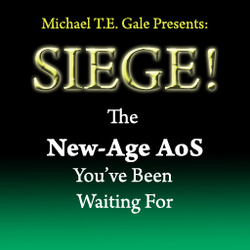 "The perfect blend of AoS and RPG elements delivered straight to your monitor."

Brought to you by Michael T.E. Gale (bugbear on U.S. East)


The perfect blend of AoS and RPG has been created by combining fan favorite elements from popular PvP scenarios such as AoS, Alterac Valley, and Arathi Basin.

The player's primary goal of SIEGE! is to capture spawn points (13 total) across the vast region of the two feuding kingdoms. These spawn points are captured and recaptured by killing the Boss at them. For example, in the southwestern swamp there is murloc and furbolg spawn points. If you defeat the Murloc King, you can hearth to his location (hearthing mentioned later), purchase from his shop, upgrade him with items found at his nearby shop, the Murloc Fish Boutique, grab a quest item for your golem summoning quest chain (explained later), and he will periodically spawn 2 murlocs into the nearby lane to bolster your kingdom's ranks. The spawn points also offer a periodic income to the heroes of it's owning kingdom.

There are 2 quest chains for each kingdom with similar quest objectives for each: the blacksmith and the goblin engineers. The 2 quest lines are shared by every hero of the kingdom, so teamwork is essential in making sure they are completed in a timely fashion. All quests in both chains are conveniently located, and require little out of the way travel to complete them. In fact, most just require you purchase a quest item from a specific spawn location, which are locations you will be assaulting without the quest. The blacksmith quest chain has 10 steps in it, each completion upgrading your kingdom's AI troops health, defense, and attack power. The goblin engineer quest line has 5 steps, and at the end summons 2 large siege golems to assault your opponents. There is also purchasable light siege golems available from the goblin engineer, with a few minute cooldown between purchases, after the larger golems have been summoned.

Hearth stones are distributed to each new hero, are upgradable, and are a vital tool to treading land quickly. The casting time on these stones is 10 seconds, and if you are attacked it will cancel the hearthing process. Fortunately, there is a small cooldown of only 30 seconds on the item, allowing easy access across the kingdoms from spawn point to spawn point.

Each hero is given a weapon which they can increase the power of (Tiers) by purchasing upgrades in numerical order. Advanced players can use the gems dropped throughout the map by the neutral hostile minor races to decrease the cost of their weapon tiering through Transmutations. There is also a plethora of additional items that upgrade similar to the weapon tiering (without the use of gems), with a much more simple "item tree" type of upgrade method rather than the item combining popular in modern AoS maps. An example of the "item tree" method: If I purchase a pair of Slippers of Agility, I can spend gold and medallions (medallions are gained from doing quests, killing, and selling high level gems) to upgrade these slipper into Murloc Jogging Shoes. I can then upgrade them using the same method into Swift Zebra Kicks, which not only have increased stats, but allow me to wind walk for a short period of time at a large increase in running speed.

There are 4 optional bosses scattered about the world of SIEGE!, each holding a rune of power. These runes are powerful tools used in transmuting Tier 6 weapons, have useful on use abilities, and are dropped when you are slain. The runes can only be used for 1 Tier 6 transmutation, as they are 'tapped' after before used for one.

You can find our forums at:

or visit us in our clan channel on U.S. East at:

This map has been finalized.

Moderator
20:07, 27th Feb 2009 by bounty hunter2: This map has five mini moderator votes for approval, thus Approved. I will try to play it and write a review this days.
Read full review...
Reputation Statistics
Page 1 of 4
Show Ignored Content
Page 1 of 4