Shards of Resistance: The Raiders 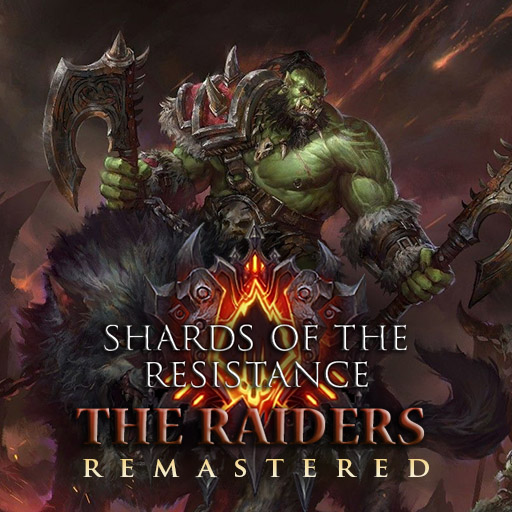 This bundle is marked as approved. It works and satisfies the submission rules.
View usage Statistics Legacy download
Reactions: Thuj, Straze, Dio7 and 11 others

Shards of Resistance: The Raiders (Campaign)

This should definantly be approved soon...
10/10

Maps 1
The best campaing ever!

Maps 1
best campaign here, but the zerg is really stupid, if ur gonna change anything make the zerg into something else

Lots of cool custom units. a few minor mistakes and imba but its still good. 9/10.

Models 11 Icons 1
The best campain i have ever seen

Broken campaign. Original creator says &quot;improvements&quot; make some levels unfinishable. &quot;Improver&quot; admits he didn't test the campaign without using cheat codes. Broken trigger in the level with infinite trog respawns (which is pathetic in itself).

Looks like an interesting plot. Original campaign is probably worth checking out. This version isn't worth your time though.

Maps 4
Von Rex, i thought it was pretty good, i beat it without using cheats
some of the units where a bit imba but other than that it was awsome!

Maps 3
Good campaing 6/10
No Zerg!! its not warcraft 3 its starcraft

!!! GREAT! I only found some really small bugs and mistakes! It was wonderful! !! This is what a perfect campaign should look like.

Icons 7 Maps 3 Tutorials 2
Huzzah!! Good campagin. Has a few bugs. (I got stuck). Still it is really quite pro. Make more and I will play them. Huzzah!!

Icons 2 Maps 1
yah, the campaign was a bit hard, esp when you first meet the troggs, i kinda got ownd.

Sorry to be nuisance, but the link provided doesn't work for me.
Does anyone have an alternative link I could DL from?(Platinum, make sure its not ending with SE)

great storyline, great animations, models, pretty much everything is 10/10...
best campaign ever!

Maps 6
I saved this map file in the campaign folder of warcraft 3. It doesent show in the custom campaign section of warcrft 3.... so i am confused. The only reason why i assumed it was a campaign is because thats what people where calling it. I also extracted the map filed with winzip and it still doesent work sooo...... how to i play this map?

Models 15
WTF!?! download file bugged, and i enjoyed this campaign so much

Nice campaign really like it ... But there are some bugs especially this fireball bug with the raider warchief.. i mean it lags like hell if you cast it 2 times : (
9/10 because of some bugs but still one of the best campaigns
you can play this map by adding .w3n at the end of the file's name

Absolutely Brilliant!
The best custom campaign by a wide margin.

Kobayashi's fireball spell creates a massive memory leak for me that can't be fixed with a map reload or even restarting FT. I assume this is a version conflict. Does anyone have a fix for this?

UPDATE:
Having played this campaign through, it is truly broken.
Insanely imbalanced missions and wildly confusing terrain.
Such a shame. The cinematics are beautiful and the models and custom doodads are great.
Last edited: Oct 13, 2009

Awesome job there guys, a flawless campaign from all viewpoints. I do hope you'll make a follow-up.

The best custom campaign i played but iwish it was updated like the people who posted above about the fireball bug.

Maps 1
This is a fucking awesome campaign; it's challenging and fun at the same time. I found the thing with the zergs really funny, and I think it made the campaign much better than without.

I have downloaded the campaign and saved it in my Campaign list. But when i start WC:3 and go to custom campaign then it isnt there, so i copied it to map ( Frozen throne ) There it wasnt aswell, what do i need to do?

How Do You Make This Work D:

I can`t download the campaing the link its broken

I can't find the platinum edition ANYWHERE!!!!! Does anyone know where I can find?????

Maps 2
nice camping but i have soo big lag

rex03 said:
nice camping but i have soo big lag
Click to expand...

Yes, very big lag in some event. Memory leak or maybe too many unit respawning. Quite annoying. Good storyline and maps anyway.

Maps 10
Yeah, sorry about the buginess y'all.

where the hell that he get retro knight model?????

This is a good art!

I just on it.
I like it, a very good campaign.

Best campaign I have ever played, I must say. The cinematics were awesome, and the music made me to feel like I'm watching a great movie. Kobayashi's fireball made my game so LAGGY!, so It was harder to fight without that DPS from It. There were some bugs and issues but It wasn't annoying. Anyway, Campaign is the best of the best. 20/10

Best campaign i've played 9/10, loved how you added the zerg into it. Sequel?!?

The memory leak from that fireball spell is an absolute bint but everything else is fantastic, especially the cinematics! Rather unnecessarily difficult at times but that's just one person's opinion.

There could be better directions in many of the levels, like the one where you defend the canyon especially. I just kinda got dropped in with this huge base and map without a clue as to what I should be doing. I didn't know whether to erect towers or build units or what and it made everything very confusing.

That's just a fraction of my experience, though. I want to mention in closing that the terrain is incredibly designed, and it was enjoyable to explore every corner of the maps.

Maps 8
My favorite campaign together with the Dwarf campaign. I am sad that Blizzard's reckless updates are ruining these campaigns.

Maps 8
I like the part where the lady (main hero) dies.

At the first mission, the game is unplayable because after engaging the first "wave" of undead the fps drops down and the game is like I said, unplayable. Is it to you guys too or does it happen only to me? That's too bad. I really wanted to play this campaign because I heard it is the 4th from Joe's Chronicles.

EDIT: Oh, it seems the fireball spell is bugged, that's why it makes the game drop fps. I will come back with a review after finishing the campaign.
Last edited: Nov 6, 2018

Maps 8
Again, Blizzard's reckless updates ruined this campaign. And no its' not in the Joe quest series, it is even better than that.

This campaign looks really good. I've played som missions and I'm loving it. But I have a problem that I wonder if someone else has had.
When I play it at hard difficulty it reallys slows down even if I change resolution and other graphis stuffs. I have tried with very loooow resolution but nothing. I understand that quality of the campaign is high and sometimes the number of the enemies is elevate but it is still very odd isnt't? Besides I have a very good laptop with a last-generation nvidia so... It's weird that warcraft3 is pushing it to the limit. I have no such problems with starcraft2... When I play the first mission at hard it starts slow down after some seconds but it doens't do it at normal even it the number of the enemies at the beginnig of the map it seems to be the same. Second mission: no problem but the third one start to slow down when you get to run the orcish base and take down the undead while taking the heroes to the oracle. Does the campaign-editor knows something about this?

I've read only now the previous comment about the blizzard updates as cause of it, isn't there something that can be done to avoid the problem?

Allright, I got it now. It's , ac Cioco said, the fireball thing. There is no such problem in the second mission because Kobayashi is not in it. Let's play it now

orl_fur said:
Allright, I got it now. It's , ac Cioco said, the fireball thing.
Click to expand...

I'm glad all's well now. ^^
One month passed since I've started playing this campaign, and I didn't finish it. I was stuck half month at the 7th mission, and now I'm stuck at the last one. XD It is very hard.

EDIT:
FINISHED IT!!! I've FINISHED IT!!! FINALLY!!!!
Instead of writing the bugs I've found, and the bad things, I will just ignore them in this "review". Because, at the moment, I just don't care!!! After so much time being stuck at mission 7, then the last one, I just can't believe I'm done!
It was an amazing experience. Great job, author! Mission 7 was indeed hard, but just because you need to use your brain a little for a sound strategy, but then the last one was just unnecessarily hard, but, as I said, I don't care! It was amazing! Once again, great job! ^^

And, answering to the question at the end of the campaign (tho I know it will never happen), yea I'D LOVE TO SEE A SEQUEL! XD
And DUDE, the last cinematic was so BADASS!!! Because of the little bugs found here and there, and for the last mission, I will rate 4/5. But man, if this would've had no technical issues or bugs, and if the last mission would have been a little easier, this would've been my favorite custom campaign ever!
Last edited: Nov 6, 2018
You must log in or register to reply here.

The original Shards of Resistance

Some Crashes in Custom Campaigns