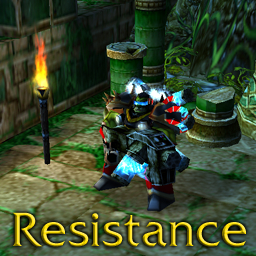 This bundle is marked as approved. It works and satisfies the submission rules.
View usage Statistics Legacy download
Reactions: deepstrasz and JansiGX
I really have no idea how I am supposed to improve the description to satisfy the moderators...

PLAYERS: 1
CONTROLS: Just like a melee game, just w/o buildings.
OBJECTIVE: Get to the end of the map.
CABBAGE: No.

A naga resistance force has been discovered occupying ruins near your location. Command will destroy the forces guarding the door and you must then proceed to clear the ruins on
the inside.

You start the game off with a hero, a few grunts, two rocketeers, and a medic. Your goal is the explore the ruins and clear it of naga forces. It is just like playing the campaigns in wc3. people continue to complain about the briefness of the description but there is not much I can put in here.

Since I cannot seem to provide a thorough enough description I am just going to say how to beat the game here.

Watch the cinematic.
Once you have control of your men send them south down the main corridor. You will encounter three summoners. The one in the middle will drop a valuable artifact. This is a little bonus for players who like to explore, or who can not seem to find the right way to go.
Go back to where you started and bust through the door on the west. After fighting a few murlocs you will find the hallway splits. It is easiest to go south first, then the north. The southern passage is a dead end, but you can break up an ambush before it hits you. If you go north first you will find yourself surrounded and may lose a unit.
Soon you will find another door. This leads into the spawning pools. Fight your way around the edges of the pools and try not to lose any men. When you get to the middle you will be ambushed by loads of naga. You can set up your men in a defensive formation in the middle of the torches and send one unit to alert the naga in order to survive better.
Continue your way around the pools till you find a hole in the south wall, this will bring you into a cave of turtles. After killing a few turtles you will find yourself back into ruins, there is a dragon turtle here. Kill it as fast as you can and use jav missiles to keep it stunned. Do not let it devour your medic.
After breaking back into the ruins (you must flip a switch the dragon turtle was guarding) you will find a lone murloc in a large hallway. Be cautious as it is not alone. It is surrounded by clocked murlocs. Do not let your medic get killed. Proceed through the doors to the east, then the north. You will find yourself in an ornate hallway filled with naga. After a small skirmish you will pass a large door on the south of the hall. Go inside the door (this is where the prisoners are). After clearing the room you will find cages in the southwest corner that contain the prisoners. Proceed down the ornate hallway till you find stairs. At the top of the stairs are summoners and a royal guard. Kill the guard quickly and try to keep him stunned. Do not lose your units. After you kill the guard a cinematic will start.

The tank does not turn its turret very quickly, use this to your advantage. Place one grunt on the opposite side of the rest of your forces and let the tank attack him. Use everyone else to pound the tank. Do not let the tank get a good shot at the bulk of your forces. Spread out. And do not let him get a bead on your hero. Do not worry about losing men here, this is your last fight with them.

Congratulations, you have killed the boss.
Proceed to the southwest corner and go through the hole in the wall.

Now it is just a mad dash in your tank. Enjoy yourself.

Skins 2 Maps 3
Give more description of the steps, I mean, tell about the quest and ect. Some pictures would be nice, and give credits if needed. If you have a hero, explain his abilities and such.

If it isn't finish, why upload it.

Models 2 Icons 24 Skins 10 Maps 5 Templates 1
What I mean by "Game is not yet finished" is I do not like the ending. I want to add something in there, but I am going to get started with the space orc campaign so I will not have to time to finish this one. Download the map and play it and you will see what I mean. It is completely playable, just the ending is really lacking.

Maps 11
Enjoyable game!
Somehow unusual concept of Space Orcs with high-tech weapons shooting naga race.
Boss was a good challenge and final ride in the tank was enjoyable. And yeah, there is no ending, at least make Victory at the end if you think you have no time to put something there.

Only thing I can suggest is add some abilities to other troops too otherwise it's too simple.

Maps 3
Nice map, but you should fix tooltips, icons and unit upgrades. And fix last Circle of Power’s selection scale, it's kind of small.
It also crashed once when I clicked hero attributes when I was level 6 once.
And fix the credits, it says “Explosion model by WILL THE”.
Also add an ending and preview screen
4/5

I really have no idea how I am supposed to improve the description to satisfy the moderators...
Click to expand...

Maps 1
Well, it was fun while it lasted, but when my medic died, the game crashed!

Models 2 Icons 24 Skins 10 Maps 5 Templates 1
Alright, fixed a lot of stuff up. I don't understand why you people are having crashes though. There aren't even triggers linked to medics dying or clicking the hero button.

Maps 2
Maybe bug with medic's dying animation. I'll test your map and tell u what I think of it.

Its so hard to control the tank :|

Game crashed when a grunt had 27 hp and was running at the same time it got hit, maybe death animation bug again?

EDIT: i kinda suck at this, by the time i got to the dragon turtle all i had left was my hero, my medic was the first to go because it kept running towords the enemies

Models 2 Icons 24 Skins 10 Maps 5 Templates 1
Yes Kidsoulex, I made another map with that tank system, but have two people controlling it. Better tanks
Its a rather fun game if I do say so myself. I suggest using the mouse and arrows, forget the hotkeys. Or give the tank a move order and go hotkeys and arrows. It is much easier with two people.
Yea warblazer... I don't know about the crashes but seriously? The turtle? You didn't beat the campaigns without cheats did you?

Models 2 Icons 24 Skins 10 Maps 5 Templates 1
Yay strategy!
I just hate the crushing wave. It offers quite the challenge though, it takes all my units to halfway dead everytime, I suppose I should dodge...
Then the beast devours one of my men. Unfortunately it has gobbled my medic a few times, killing her before I could bring the beast down.
The best way to bring 'er down is to keep her stunned and focus fire everything you have at her. Usually I have all my units at this time, and the sorcerer's stone. She goes down fast, but she does a lot of damage in that time. If you are not careful you'll lose a few men.

actually i did manage to beat it the 2nd time around, that time i kept my units alive and won without losing a single guy

Maps 4
The hero does not have hero glow. This way it can be added: https://www.hiveworkshop.com/threads/how-to-add-hero-glow-without-modeling.146416/
Even the smaller Myrmidons are called the same as the big ones.
For some reason, the game stopped working when the Naga Myrmidons started appearing from the pools. Happens every time after I load.
The summoned Watery Spirits have Headhunter's Spirit on the summoned expiration timer bar.
Story, it's absent.
I really have to commend the splendid scenery.
Enemy units should be original, they're basically just TfT Naga units.
Too bad you can't return after destroying the tank.
The tank aiming system is a bit annoying but lucky the soldiers don't run too much and can be run over.

I'll give it 4s for its time and somewhat ingenuity.
You must log in or register to reply here.

Shards of Resistance: The Raiders
2 3